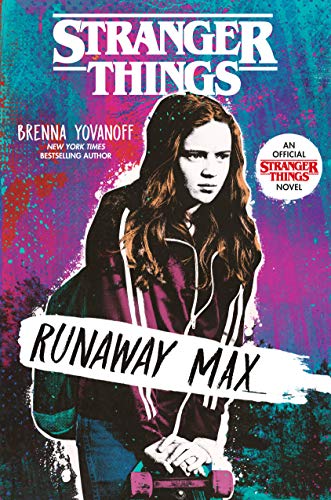 Meet Max. She's from California. She skateboards. Her family just dumped her in the middle of Indiana. And she's really not ready to call Hawkins her new home.

Whether she's facing off against her bully brother, Billy, the new kids at school, or monsters abound, Max tackles life with sass and grit. This must-read novel based on the hit Netflix series Stranger Things explores Max's past--with all the good and the bad it's given her--in the lead up to the thrilling season that introduces our favorite new member of the gang.

The floor of the San Diego bus station was mostly cigarette butts. A million years ago, the building had probably been fancy, like Grand Central or those huge places you see in movies. But now it just looked gray all over, like a warehouse full of crumpled band flyers and winos.
It was almost midnight, but the lobby was crowded. Next to me, a wall of storage lockers ran all the way down to the end. One of the lockers was leaking a little, like something had spilled inside and was dripping out onto the floor. It was sticking to my shoes.
There were vending machines on the other side of the lobby, and there was a bar over in the corner, where a bunch of skinny, stubbly men sat smoking into ashtrays, hunched over their beers like goblins. The smoke made the air look hazy and weird.
I hurried along, close to the lockers, keeping my chin down and trying not to look obvious. Back at my house, when I’d imagined this scene, I’d been pretty sure I’d be able to blend into the crowd, no problem. But now that I was here, it was harder than I’d pictured. I’d been counting on the chaos and the size to cover me. It was a bus station, after all. I didn’t figure I’d be the only one here who was still too young to drive.
On my street or at school, I was easy to overlook— twelve years old and average height, average shape and face and clothes. Average everything except for my hair, which was long and red and the brightest thing about me. I yanked it into a ponytail and tried to walk like I knew where I was going. I should have brought a hat.
Over at the ticket windows, a couple of older girls in green eyeshadow and rubber miniskirts were arguing with the guy behind the glass. Their hair was teased up so high it looked like cotton candy.
“C’mon, man,” said one of them. She was shaking her purse upside down on the window ledge, counting out quarters. “Can’t you cut me a break? I’m barely short. Only a buck fifty.”
The guy looked sarcastic and bored in his ratty Hawaiian shirt. “Does this look like a charity? No fare, no ticket.”
I reached into the pocket of my warm-up jacket and ran my fingers over my own ticket. Economy from San Diego to LA. I’d paid for it with a twenty from my mom’s jewelry box and the guy had barely looked at me.
I walked faster, sticking close to the wall with my skateboard under my arm. For a second, I thought how badass it would be to set it down and go zooming between the benches. But I didn’t. One wrong move and even a bunch of late-night dirtbags were going to notice I wasn’t supposed to be here.
I was almost to the end of the lobby when a nervous ripple went through the crowd behind me. I turned around. Two guys in tan uniforms were standing by the vending machines, looking out over the sea of faces. Even from across the station, I could catch the glint of their badges. Cops.
The tall one had fast, pale eyes and long, skinny arms like a spider. He was pacing up and down between the benches in that way cops always do. It’s a slow, official walk that says I might be a creepy string bean, but I’m the one with the badge and the gun. It reminded me of my stepdad.
If I could get to the end of the lobby, I could slip out to the depot where the buses pulled up. I’d slide into the crowd and disappear.
The scuzzy guys at the bar hunched lower over their beers. One of them mashed out his cigarette, then gave the cops a long, nasty stare and spit on the floor between his feet. The girls at the ticket window had stopped arguing with the cashier. They were acting really interested in their press-on nails, but looked plenty nervous about Officer String Bean. Maybe they had the same kind of stepdads I did.
The cops waded out into the middle of the lobby and were squinting around the bus station like they were looking for something. A lost kid, maybe. A bunch of delinquents up to no good.
Or a runaway.
I ducked my head and got ready to blend in. I was just about to step out into the terminal when someone cleared his throat and a big, heavy hand closed around my arm. I turned and looked up into the looming face of a third cop.
He smiled a bored, flat smile, all teeth. “Maxine Mayfield? I’m going to need you to come with me.” His face was hard and craggy, and he looked like he’d said the same thing to different kids about a hundred times. “You’ve got people at home worried sick about you.”