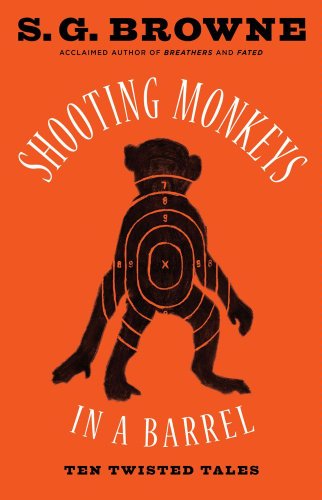 Shooting Monkeys in a Barrel

From the author of Breathers, Fated, and Lucky Bastard comes a collection of ten dark and humorous tales about extraterrestrial sex toys, a family of luck poachers, a group of professional guinea pigs, the immortal personifications of the Seven Deadly Sins, and a zombie gigolo. Just to name a few. “A Zombie’s Lament”—A newly reanimated corpse attends Undead Anonymous meetings with other zombies and comes to terms with the reality of his new existence. “Softland”—A family of luck poachers living in central California attempts to turn around its fortunes from a deal gone bad. “My Ego Is Bigger than Yours”—A new designer drug reinvents role-playing games by allowing its users to temporarily become dead celebrities and fictional characters. “Dream Girls”—A futuristic tale of sexual obsession, extraterrestrial intelligence, the death of Marilyn Monroe, and the assassination of JFK. “Shooting Monkeys in a Barrel”—A writer suffering from writer’s block becomes addicted to the words he purchases from a drug dealer. “Captivity” —A lonely and horrifying look at what it might be like if you were a bottle of shampoo. “The Sodom and Gomorrah Shore”—The Seven Deadly Sins star in the original reality television show, set back during the destruction of Sodom and Gomorrah. “Homer’s Reprise”—A modern day story of Odysseus that blends Greek mythology with Bigfoot, the Loch Ness Monster, and Herman Melville’s Moby-Dick. “Dr. Lullaby”—A panhandler and professional guinea pig discovers that the pharmaceutical drugs he’s been testing have given him unusual side effects. “Zombie Gigolo”—A day in the life of a living corpse who provides a unique service for lonely and desperate female zombies.