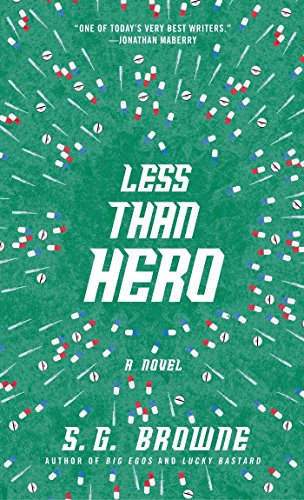 With the razor-sharp satire that earned him rave reviews for Big Egos and Lucky Bastard, among others, S.G. Browne delivers another irresistible read, about an unlikely band of heroes who use their medical complications to gain fame, confront villains, and bring their own unique brand of justice to New York City. Faster than a spreading rash! More powerful than dry heaves! Able to put villains to sleep with a single yawn! Convulsions. Nausea. Headaches. Sudden weight gain. For the pharmaceutical soldiers on the front lines of medical science—volunteers who test experimental drugs for cash—these common side effects are a small price to pay to defend your right to life, liberty, and the pursuit of antidepressants. Lloyd Prescott, thirty-year-old professional guinea pig and victim of his own inertia, is the first to notice the bizarre, seemingly implausible consequences of years of testing not-quite-legal drugs: his lips go numb, he becomes overwhelmed with exhaustion, and instantly a stranger crumples into a slumbering heap before him. Under cover of night, Lloyd and his guinea pig friends band together to project their debilitating side effects onto petty criminals who prey upon the innocent. When a horrible menace with powers eerily similar to their own threatens the city, only one force can stop this evil: the handful of brave men who routinely undergo clinical trials. “One of America’s best satiric novelists” ( Kirkus Reviews), S. G. Browne fills the prescription for a hilarious and biting commentary on our overmedicated society. Citizens, rest assured that tonight, no matter your ailment—anxiety, depression, super villains—there’s a pill to save the day.

I’m sitting on a chair in an examination room with a disposable thermometer in my mouth and a blood pressure cuff around my upper left arm. On the walls around me are posters of vascular systems and reproductive organs. Fluorescent lights wash away any shadows. A clock ticks away the afternoon. Outside the closed door, someone asks for a breath mint.

My lips have gone numb.

This has never happened to me before. Usually I don’t get anything more than cotton-mouthed, drowsy, or light-headed. Occasionally I develop rashes or feel like I have food poisoning. More often than not, I’ll get a headache. Nothing major. We’re not talking migraine and vomiting. That would be serious. What I get is pretty typical, nothing 400 milligrams of ibuprofen won’t fix.

But numbness in my lips? That’s definitely a first.

The medical technician sitting across from me removes the thermometer and the cuff, then records my temperature and my blood pressure on a chart attached to a clipboard.

The technician is male. Mid-thirties. Prematurely gray. He has a zit coming in on his chin. His breath smells like nachos.

“How are you feeling today?” he asks.

“Good,” I say, though my lips feel like they’re made of rubber.

“Any problems with your vision?” he asks, looking down at his clipboard.

I shake my head and say no.

“Numbness or tingling in any of your extremities?”

Technically my lips aren’t my extremities, but I tell him just in case and he writes it down in his notes.

“Have you experienced any nausea or flu-like symptoms?” he asks.

Sometimes just hearing the word rash makes me want to itch, but I answer in the negative three more times.

“Any bloating or rapid weight gain?” he asks.

“Are you feeling dizzy or light-headed?”

Most of the time, the questions are the same.

Frequently they’ll throw in night sweats or loss of appetite, with an occasional sinus inflammation and the odd sexual-performance question. But I’ve never been asked about an irregular heartbeat. Or renal failure.

The tech takes a few more minutes to run through the rest of his questions. By the time he sends me off for my blood and urine tests, my lips have returned to normal.

In another room, a phlebotomist wraps an elastic tourniquet around my arm and sterilizes the soft flesh just inside my left elbow.

The phlebotomist is female. Early forties. Blond with frosted tips. She’s had Botox injections around her eyes. Her breath smells like peppermint.

I’m not a big fan of needles. Even after more than five years, I still have to look away. So I take a deep breath and stare at the wall as she draws half a dozen blood samples into evacuated tubes. Normally before drawing samples, she’s supposed to ask a list of questions and record my answers on a form:

Am I on anticoagulation therapy?

Do I have a history of fits?

Do I have any bleeding disorders?

Instead, she asks me the questions while taking the samples, except for the one about fasting. This test doesn’t require me to fast. I’m not a big fan of fasting. I’m not Baha’i or Buddhist, and I’ve never spent forty days and nights on a mountain with God, so abstaining from food and drink has never been my strong suit.

After the phlebotomist draws my blood, she hands me a sterile plastic specimen container and points me to the bathroom.

“Try to catch the urine in midstream,” she says. “It makes for a cleaner sample.”

Urine samples are standard procedure. While I’m not always asked to give blood, I almost always have to leave a sample of my urine. I’ve heard some guys have a hard time peeing on command into a cup. I’ve never had a problem, so I provide a midstream catch, deposit the specimen container in the cabinet, grab my backpack, and head to the waiting room—not a waiting room in Brooklyn with soft-cushioned seats and diffused lighting and copies of Rolling Stone and National Geographic, but a waiting room in Queens with hard plastic stacking chairs and fluorescent overhead lights and copies of Us and People.

Randy stands at the front desk, hitting on the receptionist.

The receptionist is female. Late twenties. Jet-black hair. She’s wearing too much foundation. Her breath smells like cloves.

“Cardio is my nirvana.” Randy clasps his hands behind his head and flexes his biceps. “I run every day. I love working up a good sweat.”

Randy is a six-foot-tall, two-hundred-pound walking erection. In the three years I’ve known him, I’ve never seen him pass on the chance to chat up a woman.

“Lloyd, my man!” Randy gives me a bro shake followed by a pound hug, even though we’ve seen each other almost every day for the past week.

Randy may not be subtle, but he wears his affability, like his muscles, for everyone to see.

“Where’s Vic and Isaac?” I ask, looking around the otherwise empty waiting room.

Randy likes to make esoteric references to song and album titles by classic rock bands, leaving out the titles and figuring everyone knows what he’s talking about.

“Already gone,” he says, with a wink to the receptionist.

“Thank you for coming in, Mr. Prescott.” She ignores Randy and hands me some discharge literature and an envelope with my name on it. “We’ll see you for your follow-up on Tuesday.”

“I’m sorry, Mr. Ballard. I don’t date patients or clients. Plus I have a boyfriend.”

“What if I wasn’t a patient or a client?” Randy asks.

“I’d still have a boyfriend.”

“Que sera, sera.” Randy shrugs and turns to me, his face lighting up with a smile as big as Long Island. “Hey, wanna grab some grub?”