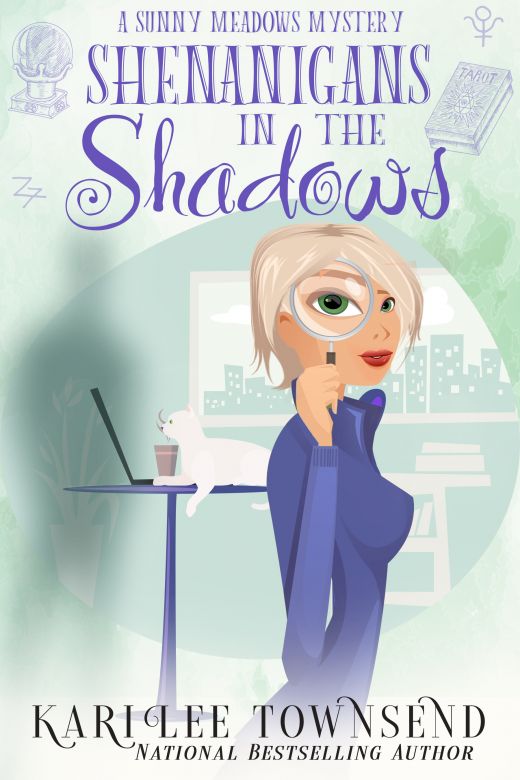 Psychic Sunshine Meadows is used to predicting trouble, but never sees the mischief and mayhem that strikes so close to home coming her way…After Sunny asks Detective Mitch Stone to move in with her in the small town of Divinity, NY, all chaos breaks loose as her cat Morty refuses to accept him. Life becomes impossible when the two resort to all sorts of shenanigans as they compete for her attention. When Morty sees his shadow and gives her a mischievous look, she knows she can’t endure six more weeks of doom and threatens to put them both in the doghouse if they don’t quit misbehaving. As her best friend’s maid of honor, the only task Sunny assigns Mitch is to guard the priceless heirloom wedding rings. When the rings come up missing, Mitch assumes Morty is trying to cause trouble. But when they discover Sunny’s ancient Victorian house has been broken into, the detective must put his differences aside and they all must work together to figure out whodunit.

“Here we go again.” I stared at my big white cat, Morty. He stood defiantly in front of the window in my Victorian house in Divinity, New York, casting a foreboding shadow behind him. A smirk crossed his aristocratic face as he walked regally out of the room.

“What do you mean?” My best friend and proud owner of Smokey Jo’s Tavern, Joanne Burnham, swiped burgundy curls over her voluptuous shoulder, studying me with curious gray eyes.

“I take it things still aren’t going well between him and Detective Stone?”

“They called a sort of truce. I never dreamed asking Mitch to move in with me would cause so much chaos. Morty doesn’t like to play nice. This end of summer heat wave isn’t helping matters, either.” I slicked back my short blond hair, praying for a breeze to blow through the window. My old house didn’t have air conditioning, something Mitch hadn’t been happy to discover after moving in a few weeks ago.

“Maybe Morty’s jealous of the attention you’re giving to Mitch instead of him now that you’re finally a real couple. I went through that with Cole and Biff.”

Biff was the beautiful Great Dane pup Cole and Jo had adopted from Animal Angels. Poor baby had been abused, but once Cole laid eyes on him, he was a goner. Biff didn’t like to share his daddy with anyone, not even Jo. They’d bought a house with a fenced-in yard in preparation for their wedding and the new family they planned to start.

I glanced outside at Biff lying like an angel in the shade under a tree in the back yard. “What did you do, tranquilize him? He used to be so hyper.”

“Easier said than done with Morty, considering the house is his and he was gracious enough to let me stay. He’s his own boss, and we all know that.”

“Speak of the devil.” Jo grinned as my big brooding hulk of a man walked through the front door, followed closely by her even bigger tattooed, leather covered Sasquatch. Morty shot outside before the door closed, and Mitch grunted as if to say good riddance, then the men joined us in the living room.

He frowned at Jo while rubbing his whiskered jaw, the scar that graced it and his crooked nose. “I can only imagine what you two were talking about.” Then he looked at me and arched a thick black brow, the crease on his forehead deepening. I wasn’t about to tell him. Let him worry for a change. Lord knew he and Morty put me through enough.

“Did you put the rings someplace safe?” I asked.

“I’m a cop, Tink.” He winked, tossing around my nickname to tease me. He slapped his chest. “I’m the king of safety.”

Cole’s grandmother had recently died, leaving him her gorgeous set of heirloom wedding rings stored in an antique hand-painted box to give to Jo. He was all his grandmother had left, except for an estranged cousin they never saw. She’d wanted him to have something special to give to the angel who’d saved his life after his first wife died.

Cole’s best man was Jo’s bartender Sean O’Malley. Sean was working closely with Jo’s cousin, Zoe, who was the wedding planner and Sean’s date. He was a blond haired, blue eyed, ladies’ man with dimples to die for and one of my best friends. Loved the guy, but no way was he responsible enough to hold onto the rings. They’d asked me. As Jo’s maid of honor, the only job I gave Mitch was to guard the rings. A simple, fitting job for a detective.

“And where would that ‘safe place’ be, Grumpy Pants?” I asked, throwing his nickname at him, minus the wink. I was not in a teasing mood. He was the king of something all right, but safety wasn’t the word that came to mind after the way he’d behaved this morning with Morty.

His eyes softened as he studied me. “They’re in the garage on my new workbench. No one goes in there but me. They’re safer there than anywhere. I promise.” His deep voice turned husky. “I got this, babe. Trust me.”

I couldn’t help melting a little and forgiving him a tiny bit. “Where’s Granny Gert?”

“She took off in her big white Cadillac to run some errands,” Cole interjected. “She said to tell you she made cookies for Captain Grady Walker and had to talk to the Innkeeper about your parents’ reservations for the wedding.” He shook his buzzed head with a chuckle. “Lord help anyone who gets in her way.”

Granny Gert had passed her road test with a little help, but the whole town knew to clear out of her way. She was Big Don’s best client down at the autobody shop. Her car insurance cost more than her car, but there was no taking away her independence.

“Where’d Mitch go?” I asked, realizing he was gone.

Jo shrugged. “I saw him slip away while Cole was talking.”

We all stared at each other. No words were necessary. Morty was gone. Mitch was gone. Mischief was bound to happen.

“I’ll take the back,” Cole finished.

We split up and hurriedly looked everywhere for Morty and Mitch, aka Mischief and Mayhem. I had a sinking sensation I wasn’t going to like what I would find. Just as I feared, they weren’t anywhere inside the house. When I came back downstairs, Jo had walked back inside through the front door. She looked at me and shook her head, which meant they weren’t out front either. That could only mean one thing. They were out back.

“I don’t even want to know what they’re doing in the back yard,” I said.

Cole suddenly threw open the back door and stepped inside with a dark look on his face. “I found them. You might want to brace yourself before you come out here.”

Jo walked past him and clapped a hand over her mouth, her eyes opening wide.

I couldn’t take it anymore. I had to see what all the fuss was about. Charging past them, I ran into the yard and skidded to a stop, my jaw falling wide open. Mitch and Morty stood there, covered in mud and staring at me with guilty expressions. The yard now sported a million holes, giving a whole new meaning to aerating, and all of my flowers had been way more than pruned. They were pitiful. Meanwhile, Biff still sat under the shady tree like the good boy he was. Jo walked over to him and patted his back, while Cole headed out front.

“That’s it!” I shouted to the filthy culprits. “You’re both in the dog house until further notice.”

“I can explain,” Mitch said. “When Morty didn’t come back inside, I knew he was up to no good. Sure enough I found him digging up your rose bushes with all these holes in the yard. I tried to make him stop. That’s how I got so dirty myself.”

Morty hissed at him and blinked at me, looking down his nose with distaste as if daring me to take Mitch’s side over his.

“I’m done with excuses.” I swiped my hand through the air, too frustrated and angry to even think about sides. I adored them each for their own unique qualities, but they were making my life miserable. If they couldn’t learn to get along, then I honestly didn’t know what I would do. All I knew for sure was that none of us could go on the way things were right now. “Please clean up this mess.” I rubbed my temples and counted to ten. “How can I have Jo’s wedding shower here with you two screwing everything up?”

“Jo’s wedding shower is the least of our worries,” Cole said gravely as he reappeared from the front of the house. “The wedding’s on hold for the time being.”

“Why?” Jo asked with a shaky voice, looking ready to cry.

Cole met Mitch’s eyes with anger. “Can’t have a wedding without rings, can we?”

“What are you talking about?” Mitch looked confused and frustrated. “The rings are fine. I put them away myself.”

"Call it a hunch, but something made me check the garage." Cole sighed heavily before dropping the bomb.  "My grandmother's wedding rings are missing."