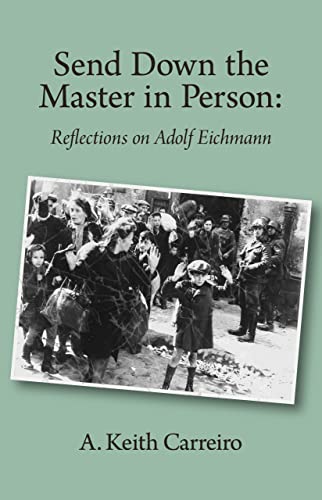 Send Down the Master in Person: Reflections on Adolf Eichmann

This poem is a tribute to my parent’s generation. It pays homage to those who fought for the Allies and to those who contributed to the Allies’ war effort against the Axis powers. While it is about Adolf Eichmann, it also refers to the evil that existed in the world, especially the horror unleashed by Nazi Germany, and the hell that Hitler and his ilk waged against humanity. The poem reveals a critical raison d'être of the war. It touches upon the importance of and the sacrifices made by the Greatest Generation in defeating this dreadful scourge of genocide, and its ability to vanquish such insufferable barbarity.

The perspective of the poem is from a fictitious Mossad agent who takes part in capturing Eichmann on 11 May 1960 in San Fernando, a suburb of Buenos Aires, Argentina.

It is ironic that the face of evil seems often clothed in plain sight. Send Down the Master in Person: Reflections on Adolf Eichmann is dedicated to all those who suffer from such wicked bigotry, hatred, and intolerance.