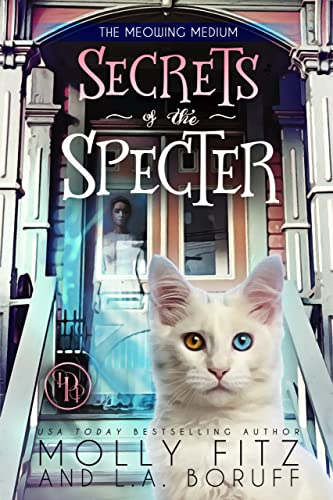 I’m Mags McAllister, and I am an honest-to-goodness modern-day candlestick maker. I work in my family’s shop in the historic district of Larkhaven, Georgia, and also make a pretty penny from sharing videos of my process online.

My life is simple, quiet, and all mine… until a white cat with mismatched eyes shows up outside my shop and refuses to leave. When I take him home, things get really weird. As in, I can now see things and people that were never there before.

It gets even freakier when a voiceless spirit introduces herself to me via a handwritten letter. This specter claims that I share her name and will also share her fate if we can’t solve the mystery that’s haunted our town since 1781… and quickly because she won’t be able to maintain her strength for much longer.

Talk about a cold case! Can I find a way to free my eighteenth-century counterpart? Or has my new feline companion just signed my death warrant by opening my eyes to the secret supernatural plane in our otherwise sleepy small town?
Read more

Hello and welcome to Colonial Candles! My name is Mags McAllister, and I’m part of the eighth generation of McAllisters to have settled in beautiful Larkhaven, Georgia.

That’s right. My family put down roots bright and early in our nation’s history, and we’re still here to this very day.

We weren’t always candle makers, though. My aunt Linda was the one who started the shop back in 1984, and we’ve been a mainstay on Historic Row ever since.

Most days, I’ll be the first face you see when you come into our humble little store. I also lead demonstrations on traditional candle-making techniques and teach the occasional class, too. My real passion lies in the more modern side of candle craftsmanship, though…

Not sure what that means? Well, I’m talking about viral videos of the oddly satisfying variety. I dip, drip, carve, and shape, then upload to YouTube, and more recently a new app called TikTok, where I have built up something of a cult following. Yes! Believe it or not, I somehow earn more from monetizing videos of my work than selling the actual candles.

Aunt Linda thinks my videos somehow tarnish the purity of our old-fashioned techniques, but frankly, I think it’s a thing of beauty, combining the past and present as I do.

It helps me stay connected to the world outside of Larkhaven. You see, I’m the only McAllister of my generation. At least, I thought I was until quite recently when one Angie Russo from Maine contacted us and said she was a long-lost family member. Imagine my joy at learning I was no longer the youngest by more than thirty years.

That joy further developed into ecstatic fervor when I met my cousin live and in-person and found her to be one of the most invigorating people I’d ever spent any amount of time with. Now we text

back and forth a few times each day, mostly sharing silly anecdotes and cute pet pics. Makes me feel a bit less isolated and reminds me that I’m only thirty years old instead of someone who’s earned her right to the senior discount.

Mind you, that doesn’t stop AARP from sending me recruitment letters at least once per month, though. You’d think a girl could enjoy a nice sweater set and antique brooch without being taken for her mother’s sister. Jeez!

Anyway, so that’s me, Mags McAllister—lots of boring and just a little bit of interesting all rolled into one. Are you here to buy some candles?

Iwatched in amused silence as a woman in khaki shorts and a Disney World t-shirt mumbled a quick excuse before hightailing it out of my store. Aunt Linda wouldn’t be pleased that I’d scared another one off. After all, she’d told me time and again that I needed to stop my introduction after saying “Hello and welcome to Colonial Candles!”

“They don’t want to hear your life story, Maggie girl,” Aunt Linda often said, punctuating the words with a sigh, an eye-roll, or even a well-placed flick against my wrist. And I suppose she had a point. Most people didn’t want to hear everything I had to say, but eventually, someone would, and I didn’t want to miss the opportunity of telling them all about me and my life.

Besides, people generally still bought candles even after I caught them up on my own personal history. They probably felt sorry for me—hey, don't judge. I'm not above accepting pity purchases. The store had become a landmark for tourists, thanks to a few well-placed reviews and that all-powerful word of mouth—and the videos of course. Larkhaven itself didn’t attract too many tourists as any kind of end destination, but, boy, did we get a lot of folks on their way down to Florida.

Our humble little town, situated in the Peach Plains region of Georgia, was about an hour from the state line. It was the perfect place to stop for those who wanted one more break to grab a meal or

stretch their legs before carrying on to Mickey’s kingdom or paying a visit to Grandma and Gramps at their retirement village.

Historic Row was particularly popular because it made parents feel like they were doing something educational and responsible before spending the rest of their week chasing after fairytale princesses, high-budget carnival rides, and sugared treats.

It was odd being a pass-through town. For reasons unbeknownst to me, most people couldn’t stand to spend more than an hour or two in the vicinity, but somehow, we’d ended up building our lives here and stayed for eight generations.

I would have very much liked to share all of this with Miss Mickey Shirt, too, but she had already disappeared back into the wide world, banging the heavy wooden door to my family’s shop behind her.

A few minutes after she’d gone, however, a scraping and a scuffling outside suggested she just might have changed her mind. After all, our candles were a sight to behold.

As I listened, the noise on the other side of the door grew louder, but still, the woman didn’t reenter the shop. What was she doing out there? Or had the door gotten stuck against the pavement again?

Unable to tamp down my curiosity, I traced my way to the front of the store and flung open that door with a gigantic grin splashed across my face. “Welcome back to—”

My greeting ended abruptly when I found myself staring at an empty street. Confused, I glanced up, down, and all around until I finally found the source of all that noise I’d been hearing.

“Well, hello. Are you here to buy some candles?” I asked the all-white cat laid out on my doormat in the form of an extra fluffy bread loaf.

Said feline visitor responded by blinking slowly in the sunlight, showing off his large eyes—one blue and one a brilliant, sparkling gold.

“You are a pretty little thing,” I gushed as I bent to pat him on the head.

He allowed it but also gave no indication as to whether he enjoyed that small bit of intimacy. His fur was shiny and well-kept, and he appeared neither too thin nor too fat. He also didn’t have a collar secured around his neck.

“Who do you belong to, little fella?” I asked, still mesmerized by those majestic, mismatched eyes of his.

He, of course, did not answer, being a cat and unable to speak English. Didn’t even give me a pity meow.

So what was I supposed to do now? Feed him? Bring him inside until I could locate the owners? Drop him off at the local animal shelter and hope for the best? And were our nearby places ‘no kill’ shelters, or would consigning him to one be like signing a death warrant? I had no idea. And I really didn’t know what to do; however, I did know just the person who might. I fished my cell phone from my cardigan pocket. Aunt Linda hated that I kept it there since it made the garment fall unevenly, but it was really the most convenient place, being that my skirt pockets were always far too small, if even present at all.