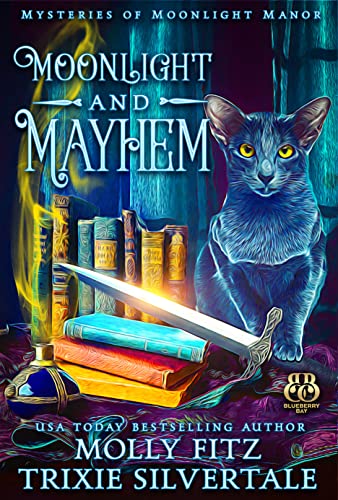 An unwelcome visitor. A surprising past. Will her fire sale go up in smoke?

Sydney Coleman has one last chance to save her manor, and to do it, she’ll have to sell off some precious heirlooms she found stashed in the attic. Of course, her plans go topsy turvy when her vindictive ex shows up!

The auction turns into a bidding war, and Sydney worries there’ll be actual casualties. She tries to smooth things over, but when her old boyfriend winds up dead—she’s the number one suspect.

Can Sydney sift through the confusing clues and find the killer, or are all sales final?

Moonlight and Mayhem is the third book in the spell-tacular paranormal cozy mystery series, Mysteries of Moonlight Manor. If you like snarky heroines, quaint locations, and clever cats, then you'll love Molly Fitz and Trixie Silvertale’s heartfelt whodunit.
Read more

Third time’s the charm. I’d heard that saying many times while growing up but never felt the weight of its scope until now. After my unceremonious exit from New York City, I began to rebuild my life in Misty Meadows. Somehow, after stumbling upon the deal of the century, I’d purchased a Gothic mansion called Moonlight Manor.

At the time of purchase, I hadn’t known about the trio of residents I inherited when declaring myself mistress of the mansion. Hindsight being what it was, I doubted if knowing about them would have stopped me from making the manor my home. The place offered a fresh start I needed with a price tag that made it possible.

My realtor, Mia, had touted its nineteenth century beauty. “The exterior is clad in rusticated granite and the front elevation is composed of two distinct towers. The one on the right is cylindrical and adds a little bump-out to the first floor drawing room and second floor main suite. The top of that round tower is trimmed with what’s called egg-and-dart molding and capped by a conical Tyrollean roof. Technically, that’s more of a Scottish Baronial feature, but because the home was built during the Gothic Revival period, it’s still classified as Gothic.”

Although, it wasn’t until I ventured into the mysterious attic, hidden behind a solid door with an antique glass knob, that I fell in love with the place. Of course, loving it wasn’t enough. I had to figure out how to make some money if I wanted to continue living with my three ghostly roommates. At least if I wanted to keep the lights on and continue eating. Not that my new friends cared much about either of those things.

Yet I didn’t give up easily, and I had a head full of fabulous ideas.

Attempt number one had been a bed-and-breakfast, but after one of the most influential travel editors in the eastern United States skewered my property in a scathing review, that adventure crumbled. The travel editor didn’t appreciate the nightmares and apparitions caused by the previous mistress of the manor being trapped between here and the hereafter.

Not to worry, my roots are solid, Midwestern stock. So I picked myself up and figuratively brushed the manure off—as I had literally done so many times on my father’s pig farm. I’d learned the only thing between me and success was time and hard work, right? After we freed Beatrix de Haviland from her disquiet, she passed through to her final rest, and we were able to move on as well.

So I came up with idea number two in month number two. Since I shared my residence with three enterprising apparitions, two human and one feline, I opted to lean into the theme that presented itself. I set up haunted mansion tours for All Hallows Eve, and using my online marketing expertise, pretty much sold out for the season in four days.

Velma, Norman, and Sir Bogart, the beloved feline pet of Miss de Haviland, helped turn haunted Moonlight Manor into a thrill to behold. We were positioned to receive rave reviews for a new and blossoming business.

Unfortunately, on opening weekend, a real live—well, let me rephrase—an actual corpse turned up in my mudroom. So, that was Plan B down the toilet. Here I am, once again brushing the dust from my hands and dungarees. All I needed now was an amazing Plan C.

Yes, this was most definitely a case of getting the girl out of Iowa but being unable to get the Iowa out of the girl.

I remained bullish, determined. Giving up, throwing in the towel, calling it quits? No way. Nuh-uh. Not going to happen.

We’d figure out a lucrative, workable idea. I was sure of it. Though, it would probably take all four of us to do so.

Seated nearby, the self-appointed Lord of the Manor, His Royal Felineness, Bogart the First, the Only, the Eternal, was a wealth of information. He’d been the best friend to a wealthy and influential

costume designer during the Golden Age of film. He literally rubbed shoulders with some of the wealthiest families on the eastern seaboard, and in his ensuing years as a ghost, had accumulated knowledge in the areas of magic, manors, and antiques.

In the center of the drawing room, I hugged my mug of Velma’s special tea to my chest to fend off the stress-ache forming there. “Sir Bogart, I was wondering if you could help me come up with a new plan to keep us afloat?”

His silky black fur glistened from within as he curled onto an ottoman and asked—no, demanded—to be placed in front of the fireplace in the drawing room. The winter wind sighed around the outside of the tower.

“Does the fire actually warm you?” I stared at the flickering flames, visible through his translucent body. The way the light refracted through his vaporous form mesmerized me.

He stretched lazily. “No, mistress. Although, the memory of such things keeps me from going mad.”

His words reminded me of Velma’s vicarious enjoyment when I described eating a caramel-apple cupcake to her. It had made her sad to be reminded of what she couldn’t experience, but she had closed her eyes and tried to remember.

I took a sip of my tea and savored the mouth feel before I swallowed. Existing as a physical being did have its benefits. “I thought perhaps for our next venture, we could try something with antiques. I’ve learned a lot since purchasing the manor, and you seem to be a bottomless well of information on the subject.”

He ignored my question and my flattery.

“Bogey, did you not hear me, or are you choosing not to answer?”

He rested his majestic head on a paw and stared at me with his all-knowing yellow eyes. “I heard you, mistress. However, I was pondering the wisdom of purchasing antiques, as you call them, to sell when you own a mansion full of them.”

He had a point. “What are you suggesting?” I took another sip.

“Perhaps you, myself, cook, and butler could inventory the contents of the manor. There are certain things that will have sentimental value to the three of us who lived and died within these walls. However, I’m certain there will be a multitude of items which would fetch a handsome price if you were to locate suitable buyers.”

For a moment, I forgot the brilliant feline was a ghost and attempted to stroke his back. My fingers drifted through his energy, but despite his lack of corporeal form, he seemed to purr.

“Can you feel that?” I asked, repeating the action.

“Once again, it is the memory—however distant—that brings me comfort.”

Despite the slight twist in my chest from his words, I continued. “Well, I think you’ve had a wonderful idea. I’m going to run into town for supplies. Would you like a new toy while I’m out?”

His wide, glowing eyes closed to slits, and the nod of his head was nearly imperceptible.

When I’d arrived, mere months ago, his worn and tattered toys littered the attic. But in exchange for new and exciting forms of entertainment, we reached a detente...