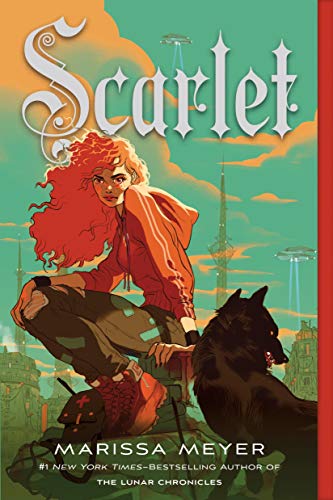 Cinder, the cyborg mechanic, returns in the second thrilling installment of Marissa Meyer's bestselling Lunar Chronicles. She's trying to break out of prison--even though if she succeeds, she'll be the Commonwealth's most wanted fugitive.

Halfway around the world, Scarlet Benoit's grandmother is missing. It turns out there are many things Scarlet doesn't know about her grandmother or the grave danger she has lived in her whole life. When Scarlet encounters Wolf, a street fighter who may have information as to her grandmother's whereabouts, she is loath to trust this stranger, but is inexplicably drawn to him, and he to her. As Scarlet and Wolf unravel one mystery, they encounter another when they meet Cinder. Now, all of them must stay one step ahead of the vicious Lunar Queen Levana, who will do anything for the handsome Prince Kai to become her husband, her king, her prisoner. 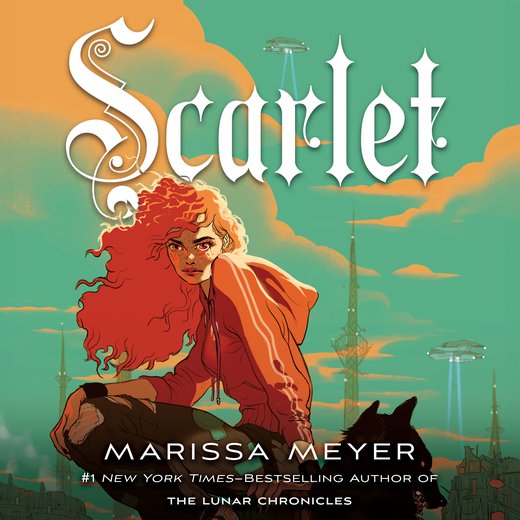 
Scarlet was descending toward the alley behind the Rieux Tavern when her portscreen chimed from the passenger seat, followed by an automated voice: “Comm received for Mademoiselle Scarlet Benoit from the Toulouse Law Enforcement Department of Missing Persons.”

Heart jumping, she swerved just in time to keep the ship’s starboard side from skidding against the stone wall, and threw down the brakes before reaching a complete stop. Scarlet killed the engine, already grabbing for the discarded portscreen. Its pale blue light glinted off the cockpit’s controls.

The Toulouse police must have found something.

“Accept!” she yelled, practically choking the port in her fingers.

She expected a vidlink from the detective assigned to her grandmother’s case, but all she got was a stream of unembellished text.

WE THANK YOU FOR YOUR PATRONAGE OF OUR DETECTIVE SERVICES.

The comm was followed by a video ad from the police, reminding all delivery ship pilots to be safe and wear their harnesses while engines were running.

Scarlet stared at the small screen until the words turned into a screaming blur of white and black and the ground seemed to drop out from beneath the ship. The plastic panel on the back of the screen crunched in her tightening grip.

“Idiots,” she hissed to the empty ship.

The words CASE CLOSED laughed back up at her.

She released a guttural scream and slammed the port down on the ship’s control panel, hoping to shatter it into pieces of plastic and metal and wire. After three solid whaps, the screen only flickered in mild irritation. “You idiots!” She threw the port at the floorboards in front of the passenger seat and slumped back, stringing her curly hair through her fingers.

Her harness cut into her chest, suddenly strangling, and she released the buckle and kicked open her door at the same time, half falling into the alley’s shadows. The grease and whiskey scent from the tavern nearly choked her as she swallowed her breaths, trying to rationalize her way out of the anger.

She would go to the police station. It was too late to go now—tomorrow, then. First thing in the morning. She would be calm and logical and she would explain to them why their assumptions were wrong. She would make them reopen the case.

Scarlet swiped her wrist over the scanner beside the ship’s hatch and yanked it up harder than the hydraulics wanted to let it go.

Half a dozen plastic crates filled with garden vegetables were crammed into the back of the ship, but Scarlet hardly saw them. She was miles away, in Toulouse, planning the conversation in her head. Calling on every last persuasion, every ounce of reasoning power she had.

Something had happened to her grandmother. Something was wrong and if the police didn’t keep looking, Scarlet was going to take it to court and see that every one of their turnip-head detectives was disbarred and would never work again and—

She snatched a gleaming red tomato in each fist, spun on her heels, and pummeled the stone wall with them. The tomatoes splattered, juice and seeds spraying across the piles of garbage that were waiting to go into the compactor.

It felt good. Scarlet grabbed another, imagining the detective’s doubt when she’d tried to explain to him that up and disappearing was not normal behavior for her grandma. She pictured the tomatoes bursting all over his smug little—

A door swung open just as a fourth tomato was obliterated. Scarlet froze, already reaching for another, as the tavern’s owner draped himself against the door frame. Gilles’s narrow face was glistening as he took in the slushy orange mess Scarlet had made on the side of his building.

“Those better not be my tomatoes.”

She withdrew her hand from the bin and wiped it down on her dirt-stained jeans. She could feel heat emanating from her face, the erratic thumping of her pulse.

Gilles wiped the sweat off his almost-bald head and glared, his default expression. “Well?”

“They weren’t yours,” she muttered. Which was true—they were technically hers until he paid her for them.

He grunted. “Then I’ll only dock three univs for having to clean off the mess. Now, if you’re done with target practice, maybe you could deign to bring some of that in here. I’ve been serving wilted lettuce for two days.”

He popped back into the restaurant, leaving the door open. The noise of dishes and laughter spilled out into the alley, bizarre in its normality.

Scarlet’s world was crashing down around her and nobody noticed. Her grandmother was missing and nobody cared.

She turned back to the hatch and gripped the edges of the tomato crate, waiting for her heart to stop hammering behind her sternum. The words from the comm still bombarded her thoughts, but they were beginning to clear. The first wave of aggression was left to rot with the smashed tomatoes.

When she could take in a breath without her lungs convulsing, she stacked the crate on top of the russet potatoes and heaved them out of the ship.

The line cooks ignored Scarlet as she dodged their spitting skillets, making her way to the cool storage room. She shoved the bins onto the shelves that had been labeled in marker, scratched out, and labeled again a dozen times over the years.

Scarlet turned around, pulling her hair off her clammy neck.