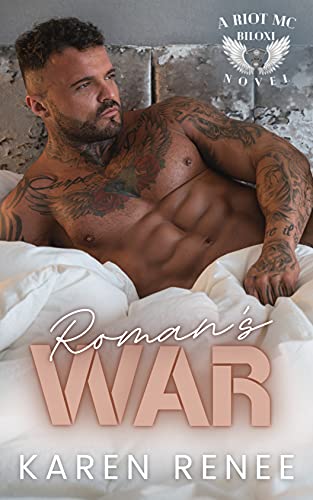 She's playing with fire, but to win Roman's heart, she's willing to take her chances.

Time is running out for Trinity Benoit. She must get married to claim her grandfather's legacy. In her family's social circle, any man interested in her is only after the inheritance. Not to mention, those men aren't her type.
Always attracted to bad boys, Roman Sanchez steals Trinity's attention the day she lays eyes on him.
Nothing goes to plan when she approaches Roman with her proposal.

As the pyrotechnic expert for the Riot MC Biloxi chapter, Roman defends his brotherhood against any threats. He's no stranger to bar brawls or street fights. Yet, he faces an epic battle against a woman who could send him to prison.
To protect himself and his club, he agrees to marry her.
It isn't until after they say, ‘I do,' that Roman discovers there's more to his wife than blackmail and extortion. If Roman isn't careful, he may find himself committed to something bigger (and possibly even better) than the Riot MC brotherhood.

Will Roman desert Trinity as soon as he's fulfilled their bargain? Or will he find himself one of the ‘mighty' who fall prey to love's force?

“Trinity, I said this last year, but I can’t stress it enough. Don’t. Do. This.”

A red light forced me to stop and watch the Harley roll into the parking lot of an apartment complex. My gut and my brain were at odds. I wanted to follow the rider into the lot, but my gut said to park street-side around the corner. In following anyone, I knew hesitation equaled disaster.

“Did you hear me?” Olivia asked.

The light turned green, and I followed my gut, motoring my small, Lexus sedan around the corner.

“I heard you, Liv. Now, a year ago, and all the times in between. But, time’s running out and I decided now is the time.”

She sighed. “Why not tomorrow? I don’t have any plans, which means I can be your wing-woman. And confronting a man like him… you need a wing-woman.”

She was probably right, but I needed to get this show on the road. “If I don’t text you in two hours, send someone to the address I send you.”

“Fine, but I don’t like this. I’m supposed to have your back, and I can’t do that from here.”

I grinned. “It’ll be fine. I’ve been following him off and on for over a year. Talk to you soon.”

With my cell tucked into my back pocket, I hustled to the sidewalk leading to the apartments. For some reason, he’d parked well away from his unit. In the past three months, he hadn’t done that.

I walked four feet along the side of the building when an arm wrapped around my chest from behind; the hand gripping my shoulder. The attacker’s other hand went to my mouth to stifle my scream.

A rich voice I hadn’t heard in weeks filled my ear. “Shut the fuck up, bitch. You’ve been following me, and I want to know why.”

My luck had run out.

He released his hold on my chest, and his hand fell away from my mouth. Then, using more force than necessary, he whirled me around and shoved me against the wall. He put a large hand to my upper chest to hold me in place. As beautiful as brick buildings are, I never realized how gritty and coarse they were until my back was pressed against one.

He cut into my thoughts with his snarled question. “Who the fuck are you?”

My tongue stuck to the roof of my mouth. He’d met me at his mother’s apartment over a year ago, and he’d seen me there a few weeks ago. I was at Marie’s place for a college football game, along with several of her other friends. She watched football like other older women watched soap operas. He had nodded at me when he dropped by, though he did that while glancing through me and five other women - most of them old enough to be my mother.

He gave me a shake. “I don’t get violent with women, but you’re fucking with me. You don’t tell me who you are, you force me to—”

His light brown eyes traveled up and down my face. “The hell we have.”

I didn’t know what the up-and-down movement of his eyes meant, but obviously I hadn’t made an impression.

When I nodded, I heard my hair rubbing against the bricks and grimaced. “We have. At your mother’s about eighteen months ago. You saw me there a few weeks back. I’m her neighbor.”

He dropped his hand from my body. As he crossed his arms over his chest, he stepped into my space like he thought I might run.

The coldness in his voice would make Jack Frost jealous. “I’ve never met you. Why the fuck are you following me, Trinity?”

This wasn’t going to plan. In all of my visions, I didn’t expect Roman to get the drop on me.

He lowered his volume, but amped up the sinisterness of his tone. “Why are you trailing me, bitch?”

“I need your help,” I breathed.

His head reared back. I’d surprised him, but it didn’t clear the anger from his eyes. Those gorgeous, tawny eyes swept my face and my body. “No fuckin’ way I can help you with a damn thing.”

He leaned toward me. “Following me was a bad idea.”

His eyes narrowed. “You take me for a fuckin’ idiot.”

“Been following me for three goddamn weeks. Spotted your ass when I left Twisted Talons. You were a man, you’d be laid out at a minimum right now.”

“I need a husband,” I blurted.

Definitely not going to plan.

He shook his head. “I heard you wrong. Rich bitch like you needs a man, and what? You feel like slumming it with a biker?”

That was insulting. To me and to him. I would never consider being with him as ‘slumming.’ For one thing, he turned women’s heads almost everywhere he went, and even though I didn’t know him very well, I knew he had more charisma in his little finger than ninety percent of the well-to-do men my mother wanted me to date.

A malicious smile curled his lips. “Bitch, you don’t know who I am. I’ve been other women’s ‘get-out-of-jail-free’ card. I got no problems with a woman cheating on her man. How the fuck do you think I’ll treat my wife?”

I opened my mouth, but words wouldn’t form because I didn’t know that about him. Then again, I had to consider my source. No way would he tell Marie that.

Satisfaction edged into his expression. “Yeah. But, I’ll be clearer. I won’t give the first fuck about my wife.”

He stepped back, and the arch of his eyebrow said we were done.

No, none of this had gone as planned. But it was time to lower my own boom.

“You’ll give a fuck if she’s going to put you in jail.”

His eyes narrowed. “What the hell are you talking about?”

“Four bodies turned up in a meth cook house fourteen months ago.”

He shook his head. “Your point?”

“You set that fire.”

If Marie hadn’t mentioned it, I’d have missed the nervous tick of his lip. “You’re full of shit, Trinity.”

“Video proof. It’ll be in the fire marshal’s inbox the moment you unbutton your jeans for another woman.”

He barked a mirthless laugh. “Not even married, and already you’re a fuckin’ nag.”

I turned my head to the side. Disappointment flooding my system. “It’s not like that.”

I glared at him.

His chest heaved with a silent chuckle. “Here’s a tip. You want a husband; blackmail isn’t a good start.”

“It wasn’t supposed to be this way.”

His head tilted, and his tone turned condescending. “It wasn’t? Please, princess, tell me how it’s supposed to be.”

“I was following you for a reason.”

He nodded. “To trap me and then blackmail me.”

I exhaled slow and silent. “Last year, I was following you for a different reason. I didn’t mean to catch you doing… what you do.”

He ran a hand down his face, his thumb snagging his lower lip as he stared daggers at me. Then, “This is bullshit. Stop fuckin’ following me.”

He turned on his heel and sauntered toward his apartment.

When my feet finally moved, he was at his door. “What about the video?” I yelled.

Even from a distance, I saw his eyes glitter. “Send it, baby. But, with a name like Trinity, I doubt you’ve got the guts.”

From my bed, I texted Olivia goodnight.

I hadn’t shared with her about my confrontation with Roman, and I wasn’t going to either. All of it was humiliating, but his parting words were horrible. I hated how he’d emphasized ‘baby’ with so much disdain.

Worst of all, though, he was right. I wouldn’t send the video, but it wasn’t because I didn’t have the guts.

If he only knew.

His mother had everything to do with it. She didn’t want him to know, but he needed to know. She’d sworn me to secrecy, but time was running out - for her and for me.

He deserved to know… but then, that’s how I got into this crazy mess.