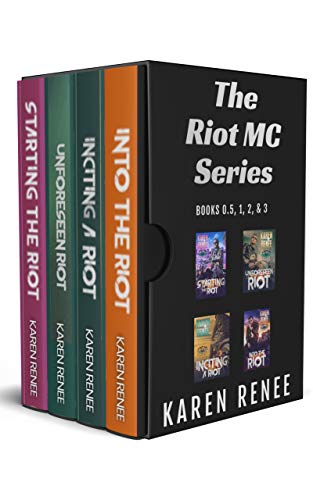 Get into the Riot MC
Starting the Riot #0.5
Jackie Eastmon's life changes after a brutal attack on her best friend. While getting Simone the help she needs, Jackie meets a rough, burly biker.
Henry “Volt” Adler, President of the Riot MC Jacksonville chapter, admires Jackie's rarely found spunk and dedication to Simone. The timing is all wrong for him to pursue Jackie. He runs into her nearly two years later, and he will stop at nothing to make her his.
Jackie struggles with this bossy, alpha-male in her life. When she learns he knows who attacked Simone but hasn't made them pay, she questions if he's the man for her.
Upon the two-year anniversary of the attack, Simone attempts suicide, and Volt hates seeing Jacqueline hurting for her friend. He orders his brothers to make the attackers pay for what they did to Simone.
One attacker proves elusive and stalks Jackie. Volt struggles to stay on the right side of the law while protecting his woman.

Unforeseen Riot
Mallory Pierce has been hiding from life after losing her husband and son to a drunk driving accident. It isn't until she meets Riot MC biker, Cal Robertson, when Mallory begins to live again. She cannot refuse a ride on the back of his bike. Their chemistry is volatile. When Mallory's home is burglarized, Cal insists on helping her put the pieces back together. Even though Mallory is physically attracted to Cal, she knows she doesn't fit in with his biker lifestyle.
Mallory's relationship with Cal has a rough start, but the two of them cannot stay away from one another. After an attempt by a rival MC to abduct Mallory she finds herself practically living with Cal. There are many things she doesn't understand about his lifestyle and his world, but she understands she's quickly developing feelings for this over-protective alpha male.
As for Cal, Mallory fascinates him and is the first woman to push his buttons. He's determined to protect her, and get to know her better along the way. When Mallory is abducted from Bike Week right under Cal's nose, he finds he cannot live without this spitfire woman in his life, and he'll do whatever he has to in order to get her back.

Inciting a Riot
When he earned his Riot MC patch, Cary "Vamp" Sullivan shoved Lorraine Ingram out of his life by cheating on her, and he's regretted it ever since. He runs into her unexpectedly and finds out she's been beaten by a man. Vamp & his Riot MC Brothers vow to protect her. Lorraine insists Vamp not be the Brother to protect her. The MC makes no promises, and she finds herself with Vamp on her doorstep. Vamp strives to get a second chance.

Into the Riot
Tennille “Neil” Lyons has her hands full with Cecilia, her drug addicted sister who recently turned to prostitution to maintain her addiction. Having her sister commit to going to rehab feels like a stroke of luck, until the dealer/handler shows up making threats. While drowning her worries at a hole-in-the-wall bar, she meets a handsome biker. As much as she wants to dismiss him, she finds out he is rougher and tougher than any other man Neil has met before. Which may come in handy, because if Cecilia doesn't pay her substantial debt, the dealer intends to collect from Neil instead.
Augustus “Razor” Richardson is prospecting with the Riot MC after being renounced from his old MC. He has a past and a reputation as a ladies' man, but rarely does a woman so blithely give him the brush-off. He knows something is wrong, but she slips away before he can figure out how to help. When an unexpected phone call puts her back in touch, Razor will stop at nothing to protect Neil from harm. However, Razor's past isn't done with him yet. Can he prove to Neil that she can trust him before it's too late?