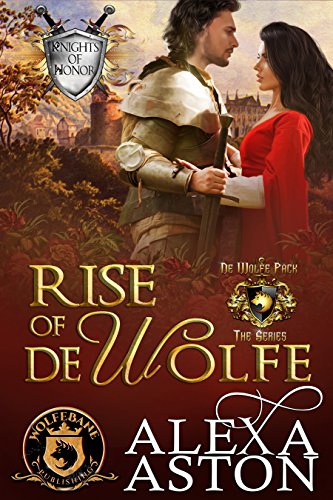 1321 A.D. – After her brother's death at the Battle of Bannockburn, Elia de Wolfe is sent to the royal court to serve as a lady-in-waiting to Queen Isabella. The granddaughter of Patrick de Wolfe, known as Nighthawk, and great-granddaughter of William de Wolfe, the Wolfe of the North, Elia is fiercely proud of her heritage and yearns to return to her home after years of fostering with the queen. When she learns her father is determined to keep her far from the border troubles with Scotland, Elia makes plans to return home.

Ferand de Montfort lost his young wife and son in childbirth and seeks a new bride—this time, one of his own choosing. He travels to London and is captivated by Elia de Wolfe, a spirited and intelligent woman. Elia convinces Ferand to escort her home, understanding she will be in his debt. Ferand hopes collecting that debt will include making Elia his wife.

Elia's increasing reluctance to reach home springs from her growing attraction to Ferand. She is torn between remaining loyal to her family and losing her opportunity for true love.

Join Ferand and Elia on their journey across England as they find love and unite two great English families, the de Montforts and de Wolfes, in this exciting prequel to The Knights of Honor medieval romance series.

Ferand de Montfort brought his horse to a halt and looked across his vast estate. Spring had come early to southern England and the land already had turned into varying shades of green. In the distance on a hill, Kinwick Castle rose majestically, still a sight that took his breath away from the time he was a boy until now as he served as its earl.

Beside him, another horse stopped. It carried one of his pages, Gilbert, a boy of eight who’d come to foster at Kinwick only last fall. The lad was still so short that his feet didn’t reach the stirrups. Ferand would speak to whomever had saddled the horse for the child. It could be dangerous to ride in such a manner.

“’Tis most beautiful, my lord,” the boy said in wonder, his round eyes roaming the land.

Ferand swept his hand across. “Everything you see, Gilbert, is Kinwick. I am a most fortunate man.” He looked to his page and saw a question in the boy’s eyes. “What is it?” he asked in concern.

“Father says I’m to keep my thoughts to myself, my lord. That I am here to serve you. He told me that Lord Ferand would do my thinking for me for the next dozen years.”

It angered him to hear what the boy had been told but he understood. Noblemen raised their sons to be seen and not heard. Ferand’s father had thought differently from most men and encouraged his son to speak his mind. Though his father was long gone, Ferand still kept up the practice and enjoyed conversing with his soldiers, seeking their opinions.

He looked sternly at Gilbert. “As Earl of Kinwick, I order you to share with me your thoughts. Silence will not be tolerated.”

The boy looked uncomfortable but nodded in understanding. Finally, he spoke.

“You say you are a fortunate man, my lord, and I know you are. But . . . you seem a lonely man to me. You have all of this land and many serfs and servants and more soldiers than I can count. You need someone to share it all with.”

“I know what it’s like to be lonely, my lord,” the page continued. “My brothers are much older than I am. My mother died giving birth to me. Hardly anyone pays me any attention. Oh, I have clothes to wear and food to eat at home but I have no one to talk with.” He brightened. “’Tis why I like it here at Kinwick. Not only are there other boys my age but the squires and even most of the soldiers are nice to me and will stop and talk and answer my questions.

“You also could use someone to talk to, my lord. I think you need a wife.”

Ferand took a deep breath and slowly released it. Little did young Gilbert know, but seven years ago, Ferand once had a wife.

Oh, Minta hadn’t been someone he could talk to, as Gilbert envisioned. Ferand’s wife had been ten and six and so shy, he usually only saw the top of her head since her eyes constantly looked to the ground under her feet. The girl had lacked confidence and spoke to everyone in a whisper. He never would have married the fragile young woman on his own but his father and hers had fostered and then fought together. They’d grown as close as brothers over the years and dreamed of the day their children could wed.

Ferand had taken one look at how tiny Minta was and how narrow her hips were and knew she wouldn’t have much success breeding. When they coupled on their wedding night, Minta cried silently the entire time though he’d been as gentle as possible. She did the same each time they came together until he left for the fight in Scotland. He’d departed Kinwick knowing she carried his babe, only to return after the battle at Bannockburn to find his father had passed on and Minta struggling in labor.

The midwife, Gerta, pulled Ferand aside and told him his wife would not live another hour. The babe was too large and unable to pass after two days of labor pains. She sent him in to comfort his countess and say goodbye. Ferand held his wife’s hand and brushed back the damp, limp hair from her face, murmuring soothing words until she expired.

Gerta swept in and quickly cut the child from the mother’s body in an effort to save it but the cord had wrapped around his tiny neck, choking the babe. Ferand insisted on holding his son’s lifeless body a few minutes before he relinquished it. Mother and son were buried the next day.

Ferand’s loneliness grew ever since.

He looked to the eager page. In truth, the boy had given him sage advice. Ferand was already a score and nine. ‘Twas time he married and provided an heir for Kinwick. Looking to the past accomplished nothing.

Kinwick’s future rested upon his shoulders.

“Who would you have me marry, Gilbert?” he asked, curious to how the lad would respond.

The page grew thoughtful. He looked over his shoulder to the south.

“Hmm. Wellbury lies adjacent to Kinwick but the baron is younger than you and also in search of a wife.” Gilbert glanced back to the north. “Winterbourne is in that direction. I hear they only have boys.”

“The same is true to the west,” Ferand added. “The earl has three sons and no daughters. And to the east?” He shrugged. “I hear there’s a daughter but she is younger than you. I would have to wait too long for her to blossom into womanhood.”

“Well, we can’t have that, my lord,” Gilbert pointed out. “You aren’t getting any younger.”

Ferand brushed a hand across his face to hide a smile. He’d asked for the boy’s opinion. Gilbert certainly wasn’t shy about giving it.

“I know!” The page brightened. He sat tall in his saddle. “You must go to London, my lord. To court.”

“Everyone says the most beautiful women are those who live at the royal court. Why, there’ll be a flock of young ladies for you to choose from,” Gilbert said with confidence. “You are most handsome, my lord. Surely, many noblewomen will find you attractive. Tell them how lovely Kinwick is, especially in the spring and fall, and you’ll also gain a bridal price in the process. So, what do you think?” the boy asked eagerly.

Ferand laughed. “I think you are wise beyond your years, Gilbert, and should be charging for such sage advice.” He paused and allowed his eyes to sweep over his land a final time.

Turning back to his companion, he said with a grin, “It looks as if I will be heading to London.”