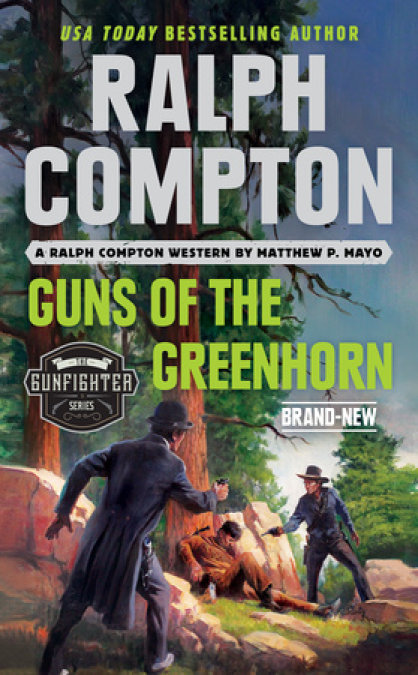 Young dandy Fletcher Ralston's privileged life of education and ease in the East comes to an abrupt end when he's summoned to the dried-up Wyoming town of Promise to inherit a run-down bordello and a lifetime of debts.

The old woman he's known only via correspondence as his "aunt" is in truth the madam of the brothel. After their meeting, she is found with her throat slit, and Fletcher is suspect number one. But the old lady's paramour, crusty Gunnar Tibbs, believes in his innocence and sets about mentoring the tenderfoot.

Fletcher is a quick study with the revolver, and the unlikely pair set out to clear Fletcher's name and track down the real killer. What they don't know is that someone is stalking them in return: Skin Varney, the notorious, unsavory brute his father double-crossed years before.

Fletcher Ralston has to learn the ways of the West, and fast. Or he'll die with his spats on.

far as i’m concerned, you’ll never serve enough time.” Tin Falls prison warden James MacNichol looked up from his desk and into the black eyes of the large, rawboned, pock-faced man in wrist and ankle manacles standing before him. “You could serve two lifetimes and then some, and it still wouldn’t be long enough for the likes of you, Skin Varney.”

The big homely inmate did his best to look grateful, subservient, whipped, cowed, humbled, and honored to be in the boss man’s presence. If he had to, he figured he could work up a trembling lip, maybe a tear or two.

Anything to get him out of Tin Falls Prison, the deepest hole in hell. He didn’t need this simpering fool to tell him he’d served his time. But he nodded, kept his mouth pulled in a frown, and stared at his worn-to-a-nub boots. “Yes, sir, warden sir.”

They loved that bowing-and-scraping stuff. And he’d dole out as much of it as he needed to, anything to get out of this rat nest.

The warden sighed, then stood. “Alas, the decision isn’t mine. And I am, after all, a slave to the law.” He leaned forward, fingers tented on the desktop. In a low voice he said, “And so should you be, Mr. Varney. Or you’ll find yourself back here faster than you can say ‘Skip to My Lou.’ And then, by Jove, we’ll see justice. Do you understand me, mister?”

Warden MacNichol strove for a menacing effect that was diminished by the fact that he had to look up at the prisoner before him.

“Sir, yes, sir,” said the manacled man, returning the warden’s hard stare until the warden broke away and thrust his hands in his trouser pockets.

Minutes later, the warden heard the door in the front gate squawk wide on dry steel hinges and then boot steps on gravel, all punctuated with a chuckling that rose to full-throated laughter as the former prisoner walked slowly away from Tin Falls Prison.

The warden ground his molars tighter and his cheeks pulsed redder as he wondered, not for the first or last time, why he’d had to let a thieving, raping killer walk free.

Skin Varney’s deep, rasping laugh echoed in the warden’s head long after the man had slipped from sight.

the knocking was loud, loud enough to jerk from sleep Fletcher J. Ralston—the young, single dandy of Upper Creston Street, 442C Chandler’s Row, Providence, Rhode Island. He groaned, then sat upright in bed, his eyes wide and head fuzzy. Who in their right mind would rouse anyone on a Sunday morning, the workingman’s day of rest?

He swung his feet to the floor and groped with his toes for his house slippers. At least he’d had good sense enough the night before to remove his garments and pull on his nightshirt.

He groaned once more as he passed the wingback chair cradling the unsightly wrinkled mess that was his soft wool trousers and coat. He’d indulged in rare extra rounds of tipple with fellow junior clerks of Rhodes and Son, the banking firm, at the club during their weekly Saturday night of celebration at conquering yet another week of still-novel work.

The knocking persisted. “I’m coming, I’m coming. . . .” He fumbled with the dead bolt and opened the door as wide as the short safety chain allowed. “Yes?”

On his doorstep, Fletcher spied a short, thin youth whose unfortunate bristly red hair poked out from beneath a blue-and-red kepi, a symbol of the Coast City Telegram Co.

“Telegram, sir,” said the youth. From his unhidden grin, it appeared the young man enjoyed rousting the innocent at such an hour on a Sunday morning. Well, the smug grin would cost him and be reflected in his tip.

“One moment.” Fletcher closed the door and slid a nickel from the china dish he kept on a table beside the door for such moments. He opened the door once more, fully this time, and held out a hand. The youngster proffered the telegram and kept his own pink palm out, upturned, waiting.

Fletcher relinquished the nickel and turned his attention to the folded yellow note. The delivery boy’s grunt of complaint at the meager tip was clipped short by the clunking shut of the heavy door.

Fletcher walked halfway to his demure kitchen to heat water for coffee before looking at the telegram.

fletcher froze, read the telegram through a second time, then slowly walked to the kitchen and read it a third time, out loud. Despite his excitement, he gave voice to his skepticism. “Who is Millicent Jessup? Why is she referred to here as my ‘aunt’? And above all else, what does this mean?” He wagged the telegram at the small cold room.

Fletcher had long believed himself alone in the world, bereft of blood relations—at least any who cared to acknowledge his existence. And now here was this shocking pronouncement.

He’d grown accepting of, if not comfortable with, the notion that he’d likely been the result of an unfortunate extramarital dalliance, an illegitimate annoyance to someone of wealth and societal standing. Instead of spending his youth gnashing his teeth and weeping in self-pity over the notion, he had instead gotten on with the matter of living.

His formative years had been spent at Swinton’s School for Boys, then later at Bilkerson College, both within the confines of his fair city. All the while Fletcher had counted himself fortunate—especially on witnessing poverty in the streets of Providence—that a conscience had accompanied the wealth and, presumably, guilt that had provided him with a fine education. On top of that, since college, he had received a modest sum from an unknown benefactor that had helped with his living expenses.

Not being the sort to indulge in numerous casual acquaintances with his fellows, save for his rather tame Saturday night revels, Fletcher found himself ill inclined to discuss the matter with anyone else. He knew few others well enough to trust them with information of such a personal nature.

Then Fletcher’s thoughts turned to his supervisor, Mr. Heep, at his place of employ, Rhodes and Son, the banking firm where he’d been working these two months. This new position had come as a welcome improvement in his situation, both in pay and in challenge. But Fletcher had proven up to the task. Mr. Heep was a wise man—he’d hired Fletcher, after all. He might be inclined to advise his young mentee.

Due in large part to his increase in earnings, Fletcher had recently managed to leave Widow Silverton’s boardinghouse behind to take up residence in his very own apartments in this modest yet respectable neighborhood. And now he was expected to leave it for the great raw frontier peopled with fiendish savages and beasts too vicious for words? It was unthinkable.

And yet the phrase “significant inheritance” was not tossed about with frequency. No, this demanded investigation. Fletcher drank a full pot of strong black coffee and paced his rooms. Then he shaved his face smooth, scented his dark hair with pomade, and dressed himself in his Sunday finery—a black derby, a storm gray waistcoat, a striped vest, a white shirt, a blue silk cravat, a stickpin, striped gray trousers, and black leather brogans with gray spats.

He then stalked the promenade of the waterfront park and pondered this most annoying, perplexing, and alluring telegram. Before the day was out, he had reread the thing dozens of times, searching for further clues that were not forthcoming.

And the more he thought on the matter, the more Fletcher realized that if anyone he knew would be able to advise him in his next steps, it would indeed be his supervisor, Mr. Heep. On the morrow, Fletcher would present the matter to him with all the grace and humility he possessed.

First thing the next morning, Fletcher arrived at the firm early and showed the mysterious telegram to his supervisor. Mr. Heep read it through twice, his pince-nez twitching at the tip of his long shining nose as if he were about to sneeze.

He looked up, tucked his spectacles into their pocket, and handed the telegram back to Fletcher. Then he smiled. “You have a promising career here, young Mr. Ralston. Therefore I will hold your position open for, shall we say, six weeks? Without pay, of course.”

“Of course,” repeated Fletcher, though he hardly heard what he was agreeing to. This was not the response he had expected.

“Late summer into autumn is rather a slow season for us, after all, and I speak for the company when I say we would hate to be the reason you passed up so promising and potentially exciting an opportunity.”

Fletcher stood with the telegram in his hand and his mouth open. He had hoped the man might somehow talk him out of it, convince him that it was little more than a hollow ruse, yet here Mr. Heep was telling Fletcher to go west. Oh, dear, he thought. Oh, dear, oh, dear . . .

“But see to it that, should you still be inclined, you return in time. Or you will find yourself bereft of gainful employment at these premises and lacking in recommendation from Messrs. Rhodes and Heep. Is that understood?”

Fletcher cleared his throat and nodded. “It is as clear as polished glass, sir. I won’t let you down.”

“As you endeavor to solve this intriguing mystery, do try to enjoy yourself traipsing across the brute plains and dodging the gunfire of rapscallions and rogues.” Heep smiled. “Every young man should have an adventure before he settles into a life of . . .” He looked about himself and a wistful look made his smile fade. “Before he settles in life, Mr. Ralston.”