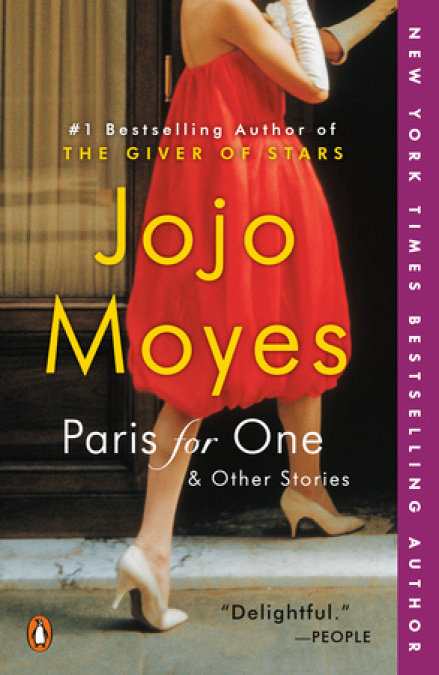 From the New York Times bestselling author of The Giver of Stars,  Paris for One and Other Stories is an irresistibly romantic collection filled with humor and heart.

"An old-fashioned, feel-good love story. . . It’s as if Moyes has booked a vacation and is taking us along. To Paris. Amour!” –USA Today

“Dreamy escapism, a book you can curl up with and easily finish over a weekend, with or without a glass of wine.” –Miami Herald

Nell is twenty-six and has never been to Paris. She's never even been on a romantic weekend away—to anywhere—before. Traveling abroad isn't really her thing. But when Nell's boyfriend fails to show up for their mini-vacation, she has the opportunity to prove everyone—including herself—wrong.  Alone in Paris, Nell finds a version of herself she never knew existed: independent and intrepid. Could this turn out to be the most adventurous weekend of her life? Funny, charming, and irresistible, "Paris for One" is quintessential Jojo Moyes—as are the other stories that round out the collection. 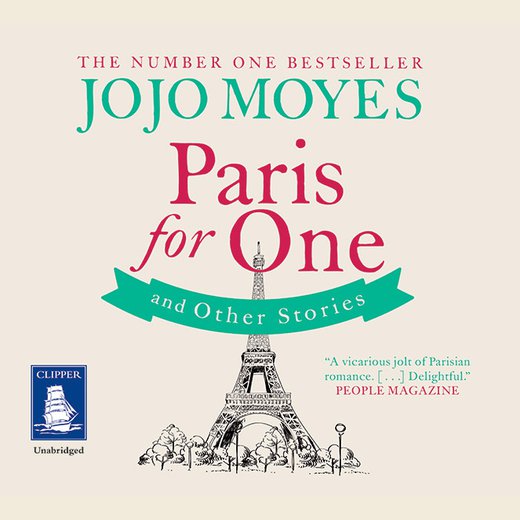 Nell shifts her bag along the plastic seating in the station and checks the clock on the wall for the eighty-ninth time. Her gaze flicks back as the door from Security slides open. Another family-clearly Disney bound-walks through into the departure lounge, with baby stroller, screaming children, and parents who have been awake way too long.

For the last half hour, her heart has been thumping, a sick feeling high in her chest.

"Train 9051 to Paris will be leaving from Platform Two in ten minutes. Please make your way to the platform. Remember to take all luggage with you."

She chews her lip, then texts him again-the fifth time.

Where are you? Train about to leave!

She had texted him twice as she set off, checking that they were still meeting at the station. When he didn't answer, she told herself it was because she had been on the Underground. Or he had. She sends a third text, and a fourth. And then, as she stands there, her phone vibrates in her hand and she almost buckles with relief.

Sorry, babe. Stuck at work. Not going to make it.

As if they had planned to catch up over a quick drink. She stares at the phone in disbelief.

Not going to make this train? Shall I wait?

And, seconds later, the reply:

No, you go. Will try for later train.

She is too shocked to be angry. She stands still as people get to their feet around her, pulling on coats, and punches out a reply.

But where will we meet?

He doesn't answer. Stuck at work. It's a surf-and-scuba-wear shop. In November. How stuck can he be?

She gazes around her, as if this might still be a joke. As if he will, even now, burst through the doors with his broad smile, telling her that he was teasing her (he is a bit too fond of teasing her). And he will take her arm, kiss her cheek with wind-chilled lips, and say something like, "You didn't think I'd miss this, did you? Your first trip to Paris?"

"Madam? You need to go to the platform." The Eurostar guard reaches for her ticket. And for a second she hesitates—will he come?—and then she is in the crowd, her little wheeled case trailing behind her. She stops and types:

Meet me at the hotel, then.

She heads down the escalator as the huge train roars into the station.

"What do you mean, you're not coming? We've planned this for ages." It is the annual Girls' Trip to Brighton. They have traveled there on the first weekend of November every year for six years—Nell, Magda, Trish, and Sue—piled into Sue's old four-wheel drive or Magda's company car. They would escape their daily lives for two nights of drinking, hanging out with the lads from stag weekends, and nursing hangovers over cooked breakfasts in a tatty hotel called Brightsea Lodge, its outside cracked and faded, the scent of its interior suffused with decades of drink and cheap aftershave.

The annual trip has survived two babies, one divorce, and a case of shingles (they spent the first night partying in Magda's hotel room instead). Nobody has ever missed one.

"Well, Pete's invited me to go to Paris."

"Pete is taking you to Paris?" Magda had stared at her as if she'd announced she was learning to speak Russian. "Pete Pete?"

"He says he can't believe I've never been."

"I went to Paris once, on a school trip. I got lost in the Louvre, and someone put my sneaker down a toilet in the youth hostel," said Trish.

"I snogged a French boy because he looked like that bloke who goes out with Halle Berry. Turned out he was actually German."

"Obviously we're wrong. Turns out he's the kind of bloke who takes Nell on romantic weekends to Paris. Which is . . . you know. Great. I just wish it wasn't the same long weekend as our long weekend."

"Well, once we'd got the tickets . . . it was difficult. . . ." Nell mumbled with a wave of her hand, hoping nobody would ask who had actually purchased these tickets. (It had been the only weekend left before Christmas when the discount had applied.)

She had planned the trip as carefully as she organized her office paperwork. She had searched the Internet for the best places to go, scanning TripAdvisor for the best budget hotels, cross-checking each one on Google, and entering the results on a spreadsheet.

She had settled on a place behind the rue de Rivoli—"clean, friendly, very romantic"—and booked an "executive double room" for two nights. She pictured herself and Pete tangled up in a French hotel bed, gazing out the window at the Eiffel Tower, holding hands over croissants and coffee in some street café. She was only really going on pictures: she didn't have much idea what you did on a weekend in Paris, apart from the obvious.

At the age of twenty-six, Nell Simmons had never been away for a weekend with a boyfriend, unless you counted that time she went rock-climbing with Andrew Dinsmore. He had made them sleep in his Mini, and she woke up so cold that she couldn't move her neck for six hours.

Nell's mother, Lilian, was fond of telling anyone who would listen that Nell "was not the adventurous type." She was also "not the type to travel," "not the kind of girl who can rely on her looks," and now, occasionally, if her mother thought Nell was out of earshot, "no spring chicken."

That was the thing about growing up in a small town—everyone thought they knew exactly what you were. Nell was the sensible one. The quiet one. The one who would carefully research any plan and who could be trusted to water your plants, mind your kids, and not run off with anyone's husband.

No, Mother. What I really am, Nell thought as she printed off the tickets, gazing at them, then tucking them into a folder with all the important information, is the kind of girl who goes to Paris for the weekend.

As the big day grew nearer, she started to enjoy dropping it into conversation. "Got to make sure my passport is up-to-date," she said when she left her mother after Sunday lunch. She bought new underwear, shaved her legs, painted her toenails a vivid shade of red (she usually went for clear). "Don't forget I'm leaving early on Friday," she said at work. "You know. For Paris."

"Oh, you're so lucky," chorused the girls in Accounts.

"I'm well jell," said Trish, who disliked Pete slightly less than everyone else.

Nell climbs onto the train and stows her bag, wondering how "jell" Trish would be if she could see her now: a girl beside an empty seat going to Paris with no idea whether her boyfriend was even going to turn up.