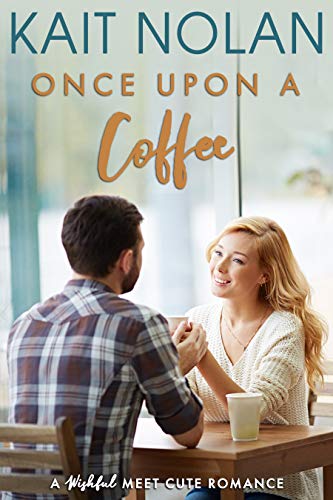 A blind date and a case of mistaken identity just might lead to love...

After a long series of stinkers, when a respectful match from an online dating site asks to meet Avery Cahill in real life, she agrees. Invoking her favorite romantic comedy, they arrange to meet in a local coffee shop with a flower and a book.

Under a serious deadline to finish a group project for his MBA--solo--the only thing Dillon Lange wants is peace and quiet. When a beautiful stranger sits down in his booth at the coffee shop, he knows he ought to say something about not being who she thinks he is, but he can't resist her smile or her engaging conversation.

How long can he keep up the charade? And what will happen when her real date shows up?

A short story of approximately 7,500 words.

"Meet cute" is a term used to describe a situation in which a future romantic couple meets for the first time. Meet Cute Romance is a series of contemporary romantic shorts celebrating the possibilities of that first meeting.

Professor Hendricks was a certifiable asshole. As Dillon Lange climbed the stairs to his second floor apartment, he ran through a number of other less-than-flattering descriptions for the man who didn’t give a damn that Dillon’s project partner had a ruptured appendix, thus blowing their chances of finishing the midterm project on time. At least if they expected to finish it together.

“You should’ve planned for this,” Hendricks had said when Dillon met with him to plead for leniency since Noelle was still in the hospital.

Right, because a ruptured organ was so easy to predict. Noelle felt awful about leaving him in the lurch, but she was so doped up on medication, she could barely stay awake, let alone string a coherent sentence together. During his brief conversation with her about it, she’d fallen asleep twice and woken up with a lurch, shouting “Save the crazy cat lady!” Totally not the frame of mind they needed for a project on macroeconomics. Because Dillon wasn’t an asshole himself, he’d said he’d take care of the project and that she should focus on getting well.

God, he missed undergrad when he could still live from class to nap to party.

The thump of machine gun fire greeted Dillon before he even got the door open.

Half crouched on the futon, half standing, his roommate Owen clutched the Xbox controller with all the intensity of a drone pilot on a mission as war raged on the flat screen TV. “Come on, dude! You’ve gotta close in on the flank, I’m getting slaughtered here!”

Battlefield? Titanfall? Hell if Dillon knew. He hadn’t had time for video games since he started his MBA at the University of Mississippi. He was at least two editions of Assassin’s Creed behind.

“Lousy.” Dillon dumped his keys in the Cool Whip bowl that served as a catch all by the door. “No extension.”

“That bites. No, no not you,” he spoke into the headset perched in his shaggy dark hair. “Well, yeah, getting ambushed at the spawning point bites, too. I’m comin’ to you. Hang on.”

“Are you gonna be at this a while? Because I’ve got a crapton of work to do on this project if I’m going to make the deadline.”

“Huh? Oh, well we’re in the early stage of this campaign. I can’t walk away right now.”

Of course, he couldn’t.