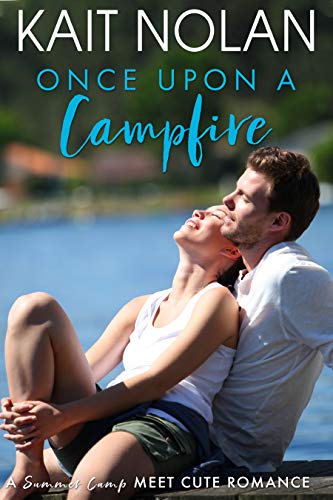 It was a terrible idea.

But that doesn't stop Sarah Meadows from saying yes to covering for her identical twin sister at staff orientation week at Camp Firefly Falls. It's just a few days and she'll be back to finishing her master's thesis, right? But when her sexy, ex-park ranger partner figures out her secret, she's got her work cut out convincing him not to turn her in.

Beckett Hayes knows he should report Sarah to the boss, but instead, he finds himself agreeing to train her. There's just something about those big, doe eyes and all that sass. But when Sarah starts to matter more than he planned, the pressure's on. Can he convince her to take the road less traveled or will this one week have to be enough?

A novelette of approximately 16k words. This story is a crossover introduction to the Camp Firefly Falls series. Check out my full novel in the series, Second Chance Summer.

"Meet cute" is a term used to describe a situation in which a future romantic couple meets for the first time. Meet Cute Romance is a series of contemporary romantic shorts celebrating the possibilities of that first meeting.

“I NEED YOU TO impersonate me.”

From the faded corduroy sofa in her tiny, studio apartment, Sarah Meadows rolled her eyes, though her sister on the other end of the phone couldn’t see.  “Did you forget to renew your driver’s license again?  Because it expired back in January.”

“I wish it were something that simple,” Taylor said.  “I’ve got a serious problem.”

“What is it this time?”  Sarah tried to keep the judgment out of her voice.  Really, she did.  But it was hard.  So much of her twin’s adult life had been a train wreck, and it seemed Sarah was routinely the one called upon to pick up the pieces.

“Well, you know I was supposed to be done with this private tour guide gig day after tomorrow and flying back East in time to start the new job at Camp Firefly Falls on Saturday, right?”

“Yeah.  You’ve got orientation next week.”

“I’m not going to make it back in time.”

Oh, not good.  Not good at all. “Did your flight get canceled?”

“No. This job came in last night—a week-long trek for some Hollywood muckitymuck.”

“You are not blowing off the camp job for one last guide trip.”  Dear God, she’d thought Taylor was past this kind of thing.

“No, it’s not like that.  I told Danny I couldn’t do it.  But he’s threatening not to give me my last month’s pay if I don’t stick around and do it.”

“You haven’t been paid in a month?”

“Room and board were covered, and I figured if I didn’t have the money in hand, I couldn’t blow it on anything stupid.  Except now I risk not getting paid at all, and I need that money, Sarah.”

That was putting things mildly.  Three years before, Taylor’s unfortunate taste in men had resulted in a short relationship with one Jax Howorth—not his real name—who’d taken every dime of Taylor’s money, trashed her credit, and left her in a mountain of debt.  She’d been slowly, painstakingly climbing out of that hole ever since.

Sarah sighed.  “How much are we talking?”

Her sister named a figure that had Sarah’s mouth dropping open.

“You’re getting paid that much as a guide?”  Maybe she’d chosen the wrong career.  Not that anybody became a grad student to make money.  The hope was that you’d make some when you finished the degree.

“Rich people will pay for all kinds of things.  And this producer guy, or whoever, is willing to give me a five thousand dollar bonus to stick around.”

That had all of Sarah’s alarm bells ringing.  “Are you sure he doesn’t expect you to do something more than be a trail guide?”

Well, that was something, at least.  “So, what exactly are you asking?”

“I want you to go to Camp Firefly Falls and be me for orientation week.  I’ll be done with this job, get paid, and be back in time for the certification test.  Nobody will be any the wiser.”