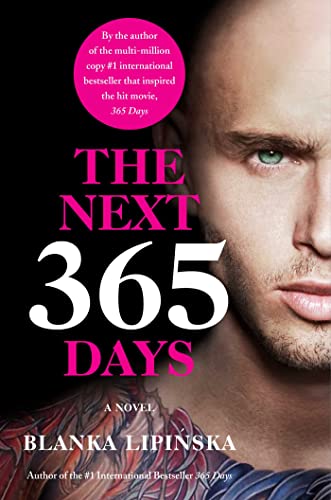 The global phenomenon and USA TODAY bestselling inspiration behind the Netflix film of the same name—the 365 Days series—continues as it follows the sizzling story of Laura and Massimo.

As the wife of Don Massimo Torricelli, one of the most dangerous Mafia bosses in Sicily, Laura’s life is a rollercoaster. She is often at risk, the potential target of Massimo’s unscrupulous enemies who will stop at nothing to destroy the powerful man. And when Laura is seriously injured in an attack, pregnant and fighting to survive, Massimo faces the toughest decision of his life. What will his life be without Laura? Will he be able to raise their child alone? What will the fate of his family be, and whose 365 days may come to a close?

Chapter 1
CHAPTER 1
Hot wind winnowed my hair as I drove my convertible down the promenade. Ariana Grande blared from the speakers. I couldn’t think of a song more fitting for my current predicament than “Break Free.” “If you want it, take it,” sang the pop star, and I bobbed my head to each word, cranking up the volume.

It was my birthday. I was getting older and should probably be feeling depressed, but the truth was that I felt more alive than ever. As I stopped the car, waiting for the light to turn green, the chorus began. The bass boomed, and I couldn’t have felt happier. I sang along.

“?‘This is the part when I say I don’t want ya. I’m stronger than I’ve been before,’?” I shouted with Ariana, waving my arms. A young man stopped his car next to mine. He sent me a flirtatious smile, tapping a hand on the steering wheel to the rhythm of the song. Aside from the loud music and my loud singing, what must have caught his eye was my outfit. Its scantiness, to be precise.

I wore a black bikini that perfectly complemented the color of my purple Plymouth Prowler. To be honest, there weren’t many things that didn’t complement that car. It was perfect. The beautiful, rare vehicle had been my birthday present. I suspected the gifts wouldn’t stop coming anytime soon—that my man wouldn’t stop showering me with presents—but I hoped against reason that this one had been the last.

It all began a month before. I would get something new each day. My thirtieth birthday required something special, and thirty gifts would apparently do the trick. I rolled my eyes and stepped on the accelerator as soon as the light turned green.

A few moments later, I parked the car, grabbed my bag, and headed to the beach. The weather was sweltering hot, and I intended to make the most of it. Reach my limits. Sunbathe until I’d had more than enough. Taking a sip of iced tea through a drinking straw, I plodded across the waterfront, relishing the feeling of the hot sand on my feet.

“Happy birthday, old girl!” my man shouted. I turned around and a geyser of Moët Rosé exploded in my face.

“The hell do you think you’re doing?!” I screamed through bouts of laughter, trying to escape the fizzy stream. Without effect. He chased me with the bottle spewing out its pressurized content. When it was empty, he threw himself at me and toppled me to the ground.

“Happy birthday,” he whispered. “I love you.”

His tongue slid between my lips and started its dance. I moaned in pleasure, wrapping my arms around his neck and spreading my legs, as he took his place between them, hips slowly twisting.

He laced his fingers with mine and pinned my arms to the ground, pulling away his head and fixing me with an amused stare.

“I have something for you.” He wiggled his eyebrows and got up, pulling me with him.

“What do you know,” I muttered, rolling my eyes behind the dark barrier of my sunglasses. He reached out and took them off. His face grew serious.

I inhaled, but he raised his hand. I said nothing.

“Before you say anything, Laura, please consider. A proposal isn’t marriage. And marriage doesn’t have to be forever.” He prodded me gently with the little box.

“Remember, I don’t want to make you do anything against your will. I’ll never order you around. Say ‘yes’ only if you want it.”

A silence descended on the both of us for a long while. He waited patiently for my reply. He got none. “If you refuse, though, I’ll send Amelia after you.”

I couldn’t take my eyes off him. I was scared, worried, awestruck, and… happy.

If anyone had told me during last New Year’s Eve that I would end up where I was, I would have burst out in laughter. I thought about it and laughed, but inwardly. And if a year ago, when Massimo had kidnapped me, anyone had suggested that I would find myself on Tenerife with that colorfully tattooed boy at my feet, I would have bet everything that such a thing was simply impossible. Well, impossible is nothing, as they say. The thought of what had happened eight months before was still chilling, but—thank God (or rather, Dr. Mendoza)—at least I could finally sleep. But after so much time and with that kind of company in bed, it really wasn’t that surprising.