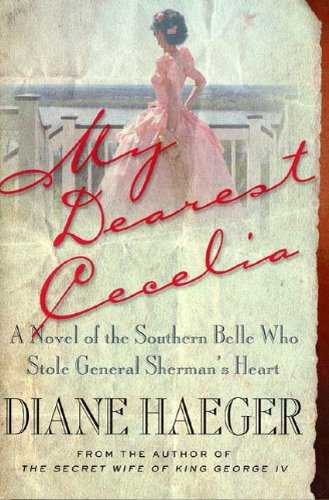 As she enters the Commencement Ball at West Point Military Academy on a spring evening in 1837, in her pink gown with white silk roses and ropes of pearls, Cecelia Stovall looks---and feels---like the perfect, innocent Southern belle. Little does she know that at that dance she will meet the man who will change her life---and the lives of all her fellow Southerners---forever. Cecelia falls instantly in love with the dashing young Northern cadet, William Tecumseh Sherman, and they embark on a fiery, secret rendezvous despite their broad cultural differences and the expectation that they will marry others. Their love remains poignantly aflame and survives the worst obstacles over years of separation and longing. And then the long-threatened Civil War starts, and both Cecelia and William assume prominent positions on opposite sides of their country's deepest and fiercest rift, as William becomes the very same General Sherman who will be feared and hated throughout the South.

Legend has it that Sherman's love for Cecelia was the reason he spared her hometown of Augusta during his infamous march to the sea, in which his troops cut a swath through nearly every other town in Georgia and burned Atlanta to the ground. Now Diane Haeger, the author of the acclaimed The Secret Wife of King George IV, has re-created this lost romance in a sweeping and lyrical novel that will be treasured by the history enthusiast---and hopeless romantic---in everyone. A multilayered historical saga spanning a quarter-century, Diane Haeger's My Dearest Cecelia is an epic novel of star-crossed lovers Cecelia Stovall and General William T. Sherman---a romance for the history books.


But there's nothing half so sweet
In life as love's young dream.
—THOMAS MOORE
Chapter One


"Damn it to hell!" William snarled, not at all certain then why her opinion mattered. He meant to say that she had surprised him. But instead self-preservation and fear had caused him to walk away.
Outside, the warm summer breeze cooled him even as he tossed down his gloves, and the sweet music of the crickets distracted him from the surprising power of his encounter with Cecelia. William wondered, as he touched the stone balustrade, what exactly had happened in there with a fellow cadet, but moreover, why had a Southern girl who should not have touched his defenses been able to do so?
"Well, now. You're not going to just leave things like that, are you?"
William turned with a start. He had believed himself alone on the terrace. But behind him, beside a twisted vine of wisteria, full of flowers, stood a compact, dignified man. He had a shock of umber-colored hair, arched brows, and gray-green eyes flecked with gold that were directed on him as he stood holding a full cup of punch. The man was alone, a total stranger to William.
"I beg your pardon, sir?"
"The girl. You don't plan to end up in the same position with her as that insufferable looking lout with the heavy eyebrows, do you?"
William glanced back inside for a moment before he replied. "I don't expect either of us has particulary impressed her this evening."
The other man chuckled and extended his hand. "Name's Lee."
"Sherman. My friends call me Cump," he responded, shaking his hand in return. "You a cadet?"
"I was. Graduated in '29. Second in my class. I've a commission now as first lieutenant of engineers supervising the work in Saint Louis Harbor."
"That is impressive. But what on earth brings you back here now?"
"I'm the commencement speaker tomorrow. Never having won a demerit here seems to be a lightning rod for the other cadets."
William shook his head. "I had two demerits my first month."
"I'll wager you haven't had a great many more since."
"True."
"You learn quickly."
"Not quickly enough, apparently, to win a second dance with the illustrious Miss Stovall."
"And that matters to you?" Lee asked as they both watched her dancing now with a different upperclassman William did not recognize.
"I don't exactly know if it does or not."
"Then it seems to me, you owe it to yourself—and Miss Stovall—to find out for certain."
William looked back at the dance floor for another moment and watched her dance. Lee was right. Something very odd inside him told William it was absolutely essential that he find out. Still he faltered. Lee saw it.
"Not that I don't appreciate the advice but—"
"She's a Southern girl, and you're from the North. Is that it?"
"She seems to think so."
"I met Miss Stovall myself this morning at the church social. She reminds me of my own wife—proud, fiery, yet delicate as glass—and in need of a man who can handle all three."
"And you think I'm that man?"
"Well, son. I wouldn't make a guess on that." Lee gazed out over the river, a sweeping black space behind a frame of tall pine trees, as he took a swallow of punch. "But you sure as hell aren't gonna find out standing here with the likes of me!"
William smiled. A heartbeat later, he extended his hand. "Thank you, Lieutenant—"
"Lee, son. The name is Robert E. Lee."