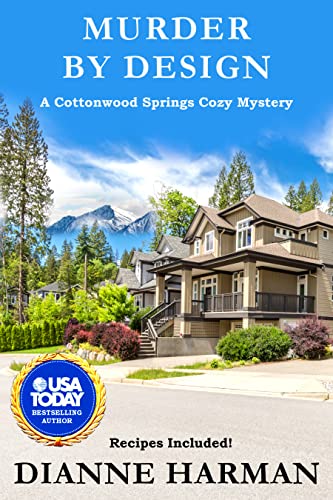 A redecorated dream house.
A bottle of wine.
A dead designer.
But did the murderer kill the wrong person?

When the new owners arrive to meet the designer they hired in the small town they’ve just moved to for a “reveal” of what she’s done with the house, things don’t quite go as planned. Their initial excitement leads to horror when they find the body of their designer on the living room floor, clearly dead. And three glasses on the dining room table, one of which is now empty.

Sheriff Davis and Brigid encounter one false lead after another in their search for the murderer. Brigid begins to wonder if the killer got the right person. Then it becomes a search not only for the murderer, but a search to find out if someone else had been targeted, and if so, who?

This is the 21st book in the Cottonwood Springs Cozy Mystery Series by a USA Today Bestselling Author.
Read more

Liz and Joan Mayfield thought Cottonwood Springs was a beautiful, idyllic town. Not only did it have tons of small-town charm on every block and corner, but the people were incredibly kind and welcoming. And for a same sex couple, that was important. They had both heard that small towns could have a lot of narrow-minded people, but that simply wasn’t the case when it came to Cottonwood Springs.

Besides their relationship, they also didn’t know how they would be greeted because they were coming from a big city. What if the local residents had prejudices against big city folk? Especially against those who dated people of the same gender? But so far, they’d been greeted with nothing but respect, open arms, and smiles.

On this particular morning, Liz and Joan were walking down the tree-lined residential street in Cottonwood Springs. The air was still cool, even though the sun was getting higher in the sky. Liz knew it would warm up soon, but she wished she would have worn a warmer jacket. The sky was turning shades of pink and orange as they strolled toward their new home. They were excited, because now that the renovations were complete, it would really feel like their new home.

It was going to be everything that they’d ever wanted. The right colors, the right lighting, everything was going to be exactly how they wanted it. That is, if the designer had held up to what she’d promised, and followed the instructions they’d given her.

The early morning light made everything seem fresh and new. Birds flitted from tree to tree, and there were no loud cars or neighbors to be heard. It certainly wasn’t like what they’d had back in the big city where they’d come from. No, Cottonwood Springs was actually quiet. The town left you with a comforting feeling, like taking a deep breath right after a strong rainstorm, once that damp earth scent hit your senses, and you could physically feel yourself relaxing.

That’s what Cottonwood Springs was like compared to Grandview, Missouri. Grandview had been filled with cars, high-speed highways, and angry drivers, all of whom felt they deserved to get where they were going before anyone else was able to get there. And that was the exact thing they were trying to get away from with their move to Cottonwood Springs.

They’d moved to Cottonwood Springs to get away from big city life and the people who lived there. By relocating, they’d put a whole state between them and their old home, and they had high hopes of starting over. The cute little town of Cottonwood Springs seemed like just the place for them to do that. It was a small town where people were nice, accepting, and also knew one another.

“I can’t wait to see what Candace has done. Do you think Candace used the colors we picked?” Liz asked as they slowly walked along the sidewalk. “Or if she used the tile we liked for the shower?”

They’d hired a designer to supervise the renovations of their new home before they’d moved into it. While the renovations were being done, they’d rented a nearby house until the final touches were finished. Thankfully the last of it had been finished yesterday evening, and this morning was going to be their first day at their new home. Liz was ecstatic and barely able to control her excitement.

“Considering we haven’t seen the place since there were exposed wall studs, I can’t even begin to guess what it’s going to look like,” Joan said. She hadn’t been thrilled with the idea of trusting a designer to redo their home to their liking.

But Liz had always dreamed of hiring a designer-decorator, and since the cost of housing was so reasonable in Cottonwood Springs, Joan had decided to give in to Liz’s wishes. Anyway, she really didn’t care all that much what the house looked like, she just wanted to be able to start living in it.
“Here we are,” Joan said as they came to their property.

It was a tall craftsman style home that had been extremely dated and in bad need of a remodel. But the two-story home was twice the square footage of their old home and half the price. Considering that they both worked online from home, location hadn’t really been an issue, as long as it was somewhere they felt they could be happy.

The house looked dark inside, and everything seemed to be closed up tight. It made them hesitate and then Liz said with a frown on her face, “I thought you told me Candace said she’d be waiting for us? It doesn’t look like there’s anyone in the house.”

“That’s what she told me,” Joan said as she looked up at their new home, and she had to agree with Liz. It didn’t appear anyone was there at all. She turned and looked at the street and the cars that were parked there.

“That’s her car,” Joan said as she pointed to it. “So, she must be here. Maybe she’s keeping the curtains drawn so we’ll be surprised. You know, to make it dark in there for the big reveal?”

Part of their requirements when they’d hired Candace was that they wanted curtains that blocked out all light. They both tended to be night owls and often needed it to be dark when they slept in some mornings. Maybe the curtains worked so well that the house only appeared to be empty with no one home.

“That’s probably it,” Liz said eagerly. “If that’s the case, she did a great job getting the curtains we wanted. Come on, let’s not make her wait any longer than she’s already had to. I can’t wait to see what it looks like.” Liz was practically squealing with excitement.

Hurrying up the sidewalk, they paused at the door, tempted to knock and then laughed at themselves. “I guess we don’t have to knock on the door of our own home,” Joan said with a giggle as she twisted the doorknob.

The first thing they noticed when they entered the house was how dark it was inside. The decorator had definitely fulfilled their dark curtain request. “Candace?” Liz called out as she took a few tentative steps inside. “Are you still here?” Joan followed her and closed the door behind her.

“Maybe she had something come up, and she got a ride with someone,” Joan said as she slowly followed Liz. “That would explain why her car is parked out in front.

“Where are the lights?” Liz asked as she fumbled her hand against the wall. “Oh! She used the green color that we picked for this room,” Liz said excitedly as she found a light switch. “Here we go. Watch your eyes.” The lights came on and illuminated their new living room. Their furniture had already been placed, the “L” shaped couch dividing the living room from the dining area, just as they’d imagined.

“Oh, look at this,” Joan said after she’d taken in everything in the room. On the dining room table were three glasses and a wine bottle. Only one glass had been used while the other two were empty. “She’s got to be around here somewhere. Looks like she’s already started pouring some celebratory wine.” Joan pointed toward the table with the glasses.

“Little early if you ask me,” Liz muttered to herself. Still, maybe this was something Candace usually did with her clients at the end of a job. She’d wanted to meet with them yesterday evening, but they were both deep into their work, Liz as an online therapist, and Joan an online accountant. They often worked in the evening when people weren’t at their jobs, so they’d had to wait until this morning to come to the house and meet with Candace.

Moving towards the dining area, Joan followed Liz. “Candace?” Liz called again. As she rounded the couch she froze.

“Oh, no!” she cried out as she dropped to her knees, her hands shaking. Laying sprawled on the floor was Candace. She looked as though she’d collapsed. Joan had to take a step back from the scene in front of her, but she felt rooted in place as her mind tried to make sense of what she was seeing. None of it made sense, even as she struggled to try to make it.

She reached out to touch Candace to confirm what her still form was already telling them, that Candace was dead. Joan turned and pulled out her phone to dial 911 as Liz let out an ear-splitting scream.