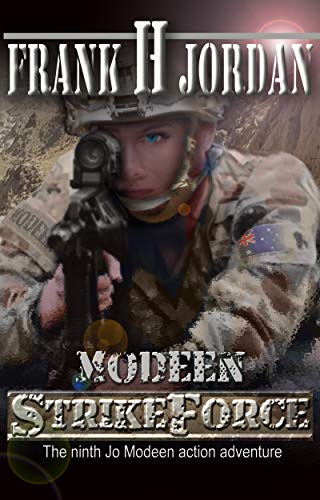 The Taliban embarks on increasingly bold raids as it struggles to maintain its Afghanistan territory and demonstrate its ability to repel invading forces. When two American A10 Hogs and a British Apache helicopter are shot down during a skirmish and the pilots captured, the Taliban's ruthless Red Group publicly celebrates the triumph and begins making demands.

The British and American military respond with forceful intent, with the British particularly anxious to re-acquire their pilots ... alive. They trust the rescue mission to a squad of top British SAS soldiers, while the Americans send in the deadly US Night Stalkers to recover the captives.

It's an impressive strikeforce, but will it be enough?

MODEEN: STRIKEFORCE is the 9th book in the high-action Jo Modeen series. The stories in this series can stand alone but are best enjoyed when read in sequence.

‘You realise you’re not going to be able to turn around in there,’ Bugs warned. ‘If you run into trouble, there’s only one way to go.’

‘A chance I’ll have to take.’ Slinging the rifle across her chest, barrel facing downward, she pulled Walt from her thigh holster and dropped to her knees.

As she crawled inside, she could see the shaft running horizontal for the first five metres before sloping downward. Extra padding on her US fatigues cushioned her elbows and knees as she inched along the gravelly surface, and she found herself once more mentally thanking Munro for kitting them out with state-of-the-art gear.

The deeper into the shaft she went, the more foggy the vision from her thermal goggles became, due to the lack of temperature variation. The vision turned from dark indigo blue to a deep green-black when she switched from thermal to night vision mode.

And the further she descended, the blacker it got.

The already confined space seemed even more restrictive in the darkness. Realising there could be something or someone inches from her and she wouldn’t know it, her other senses kicked into overdrive.

Had the tunnel been booby-trapped? More likely than not. And here I am, blindly blundering in….

She paused to take some calming breaths.

This must be what the Vietnam tunnel rats referred to as the ‘black echo’.

She gave a wry snort.

And I’ve only been in here minutes.

Gathering herself, she pushed those thoughts aside and moved onward.

When she stopped to take a breath, an ominous rasping sound reached her ears.

A continuous rasping, like someone rubbing long lengths of sandpaper together. It was coming from … maybe a metre ahead.

She froze and focused on the sound.

The hairs on the back of her neck bristled as her radar went off the scale.

Keeping her movements slow and steady, she felt around her webbing. When her gloved fingers found the small torch attachment, she pulled it free, hoping the red black-out lens cap was still attached. Without the cap to defuse the light, shining the torch in the shaft would definitely draw attention. As she slid the attachment onto the Picatinny rail beneath the barrel of her Walther Q4, she realised the rasping sound was coming closer, and had been joined by a second.

Lowering a hand to the scabbard strapped to her leg, she pulled out the special ops bayonet and held it in front of her in a tight grip.

The rasping was inching nearer, closing in on her.

She switched her night optics to thermal and then back again, peering desperately through the fog, trying to make out a shape or hint of movement in the complete blackness.

Only the rasping, coming ever nearer.

She’d have to risk using the torch.

With her blade hand, she felt under the Q4 for the tiny switch and slid it to the ON position.

The instant the light flashed on, a snake lunged at her from out of the red hue, its mouth wide and fangs extended.

She jerked back as the serpent’s fangs struck her goggles, and in a split-second reflex action, she sliced the bayonet across the air in front of her. The finely-honed blade connected with the snake and pinned it against the shaft wall. As it writhed, trying to strike out at her, she swiped the blade down, severing the head and splattering her helmet with ophidian blood. Still writhing, the sinuous body dropped to the ground beside the severed head.

Venom slid greasily down her goggles as she peered ahead. With the blade of her bayonet she flicked the still twitching body into the advancing nest of vipers.

Through her comms she heard Spooky whisper, ‘Hey, what’s that noise?’

Seeing the snake’s severed head open and close its mouth, she put the tip of her bayonet between its eyes, and when it appeared to wince, drove the blade in deep through sinew and bone. Lifting the bayonet, she flicked the attached head into the advancing reptiles, and was relieved to see two strike at the severed body part. The third continued advancing toward her, striking again and again at the barrel of her Q4. She timed the hits, and on the fourth, intercepted the strike with her blade.

Two down, two to go.

The remaining snakes had turned on each other, fighting over their comrade’s severed head, an apparently tasty morsel.

Murmuring darkly, ‘Insidious creatures,’ she took advantage of their ferocious scuffle to behead both.

‘Creatures?’ Spooky said anxiously over the comms. ‘What creatures?’

‘Snakes,’ she whispered, ‘They were making that rasping sound.’

‘Not nasty anymore. At least not these four.’ She brushed the heads aside and crawled over the still writhing bodies, before switching off the torch.

If the hostiles had laced the vent shafts with vipers, there was less likelihood she would run into further traps. All the same, she kept Walt and the bayonet handy as she continued forward.

A short time later a green hue crept into her night vision goggles and gradually intensified. A tightly meshed steel grate materialised out of the greening gloom.

Finally, the end of the ventilator shaft....