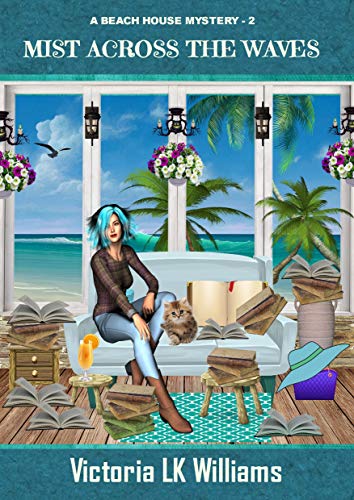 Morgan knew she didn't want to go out to sea...now she knew why.

The simple act of a surprise birthday party brings trouble from the depths off Pearl Island, and Morgan is forced to solve a murder and confront the threat to the island. It's her destiny to protect Pearl Island and it's residence, just as it's Cora's destiny to try to destroy Morgan.

The sea witch is full of trickery and malice as she tries to lure a group of ocean salvage divers with the promise of gifts from the sea. But Morgan, with the help of her friends Gabe Holleran and the Colbright sisters, plans her own slight-of-hand.

Who will win this battle? As Morgan tries to find the murderer, she also finds more about the history of Pearl Island and the roles the Seaver Family has played in the battles against the tricks and deceptions of the sea witch.

Chapter 3
Morgan unpacked the books, finding a few significant
discoveries at the bottom of the box. She quickly sent a
message to the owner, giving him news of her discovery. The
man didn't hesitate and told her to go ahead and do whatever
was needed to save the books. And when she finished that
batch, he had more boxes to send.
In the past, Morgan would have gone to the job and
worked on the book repairs on the owner’s site, but since returning
to Pearl island, she had set up shop in one of the large
rooms on the ground floor that overlooked the courtyard. She
had earned an excellent reputation over the years in her work
of repairing old books, and her clients didn't mind sending the
books to her at this stage. She still planned to go out and do
consultations at job sites, but for the most part, she was going
to do the repair work from the island. This was new to Morgan.
She'd never had roots before, but it felt right. The island
had called her home, and the large Seaver beach house had welcomed
her back to where she had spent her childhood.
"Well, Misty, it looks like we've got some work ahead of us,"
Morgan spoke to the cat sitting on her desk as she hung up the
phone. Ever since Misty had appeared from the mist the first
night Morgan arrived at the island, she had gotten in the habit
of talking to the kitten. Morgan was used to being alone and
liked her own company, but there was something about Misty's
presence that made her speak her thoughts out loud.
"It doesn't look like we will have time for another bike ride.
I better get that bike in the storage shed."Morgan was speaking
more to herself this time. Tucking her phone in her back pocket,
she hurried from the room to put the bike in the shed where
it would be out of the weather. The weatherman had promised
rain tonight, but then again, he had been promising rain for the
last couple of nights, so it was anybody's guess.
Finishing that task, Morgan came back in the house, put
some food down for the kitten, and made herself a quick sandwich.
Grabbing a bottle of water and her food, she headed up
to the library, where she planned to read the next family Journal.
Morgan was strict about the order she read the journals,
starting from the very first one, and working her way up to the
present, reading each of the journals her aunt had left behind.
"I'm glad to see you're reading the family's history," a
soft voice said behind Morgan.
Morgan had finished working in the library and, after a
quick shower, grabbed the book to take to her room and sit
outside on the widow's walk to read. Her room was on the
third floor, opening to the widow's walk connected to the opposite
side of the walk. From here, Morgan could see the shoreline
and would often spend time just sitting and watching the
boats coming into the harbor. She had always loved the widow's
walk, even as a child. She could remember sitting up here with
her aunt and her mother, reading books on the benches that
had been placed to give the best view and protection from the
wind.
The voice didn't take her by surprise; she'd secretly been expecting
it. It had been a couple of days since she'd heard the soft
musical tone, and she turned with a smile to see the shimmering
figure of her Aunt Meredith.
"Hello, Aunt Meredith. These books are fascinating; how
could you not read them? There's so much recorded here about
the history of the island."
"There's more than facts in those books, Morgan. You'll
find answers to the Seaver legend in there, as well. Be sure you
read them carefully; the information may help you someday."
Morgan looked back out to the sea as if it contained the
answers she wanted to ask before she looked back at Meredith.
"It's not over, is it? Cora will return as she promised."
Meredith nodded. She moved closer to sit next to her niece
on the bench. "I'm afraid so. But the more information you
have the better prepared you will be. Don't let your guard
down. That's when Cora will take advantage."
The two were silent for a moment, watching the waves
crash against the shore.
"You know, you should be writing a journal, as well. It's
your turn to write down the family's history. You need to
record what is happening to you, just as your mother and I did."
Morgan was silent for a moment and then turned to her
aunt to answer her, but she had disappeared.
She laughed into the empty night air. "You know, that's just
rude."