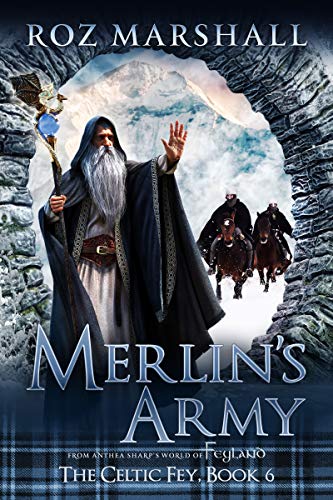 Legends come to life...After a daring rescue from high-tech computer game Feyland, Scottish teenager Corinne MacArthur looks forward to a quieter life and time to enjoy her magical grey horse and her friendship with Elphin Irving.

Music student Elphin thinks he's seen the last of the blue-faced hag who ensorcelled him in Feyland. But Cailleach, the legendary witch of winter, has other ideas. And greater ambitions. Ambitions which spread beyond the faery realm and into the real-world landscapes of Scotland.

However, she's reckoned without Corinne and Elphin, and their legendary friends...


:: Merlin's Army is the fifth book in the Celtic Fey series set in Anthea Sharp's Feyland universe (with her kind permission), and it concludes the story arc started in the first book, Unicorn Magic, amzn.com/B01LZSO1DH.

This is a clean Arthurian fantasy which is set in Scotland (and the faerie realm) and uses British English spelling and grammar. Start reading this amazing series today!