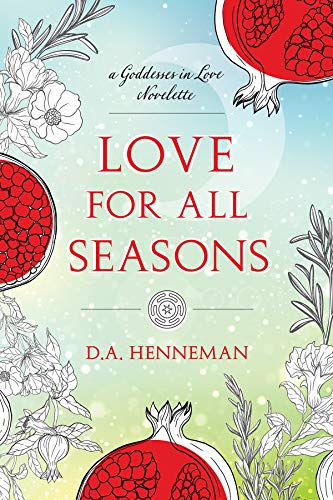 A story about how Hades and Persephone REALLY met...

The seasons aren't cooperating, and Hecate's rosemary supply is dwindling. She needs a solution for growing her crops or her spells just won't be the same. Hermes is willing to help but it comes with a price, the least of which is the two of them dabbling in the love life of Hades, the God of the Underworld.

In addition to setting Hades up on a blind date, Hermes demands Hecate spend 24-hours alone with him. That isn't what concerns her the most since she has added stipulations of her own. But the trickster has made it clear that he won't settle for anything less than her heart. Is Hecate ready to pay the price?

On the Island of Crete where she made her home, Hecate, the goddess of witchcraft tended her garden. There were countless things to prepare for the upcoming Samhain celebration and she worried she wouldn’t have time for them all. It was especially true, since a number of her potions would require substitutions and when she did that they weren’t nearly as potent. While she had endless supplies of magick at her disposal, she didn’t use it for her spells and ceremonies. There was something pleasing about doing things as the humans did and she felt more connected to the earth because of it.

She spent most of her time on the island; it was the place she thought of as home.  Lately though, it had been a great deal harder for her to do the things she once enjoyed. The seasons had stopped changing decades before, and her crops hadn’t grown properly since. She loved Demeter and her daughter Persephone but having everlasting spring was affecting more than her potions, it wasn’t good for the planet as a whole. Nothing ever had a chance to properly rest and rejuvenate. Her workload had increased because of it.

If things didn’t correct themselves soon, she would have no other option but to take matters into her magical hands. That would be a last resort as stepping on godly toes always had consequences. If she dabbled with the seasons, Demeter would be impossible to live with.

As she pushed her hands into the soft soil, she pulled out a small tuber and felt the sides for rot. It seemed to be fine, but only cutting into it later would she know for sure. She had barely enough Rosemary from the prior season to complete the recipe, but her herbs had been spindly and almost unusable. If she didn’t find a way for her Rosemary plants to produce, she wasn’t sure what she was going to use to signify remembrance in future celebrations. There wasn’t a substitution on the planet that would work for that.

A masculine voice laced with a playful tone interrupted her solitude. The visit from Hermes wasn’t entirely unexpected, but it had been some time since he last came to chat. She wondered if her thoughts from the night before had prompted his arrival.

Hecate shook her head and shot him a wry glance over her shoulder. As she suspected, his eyes weren’t anywhere near the pile of carrots she had at the end of the row.

“You aren’t even looking at the carrots.”

“Perhaps it was my carrot I was thinking of.”

Hecate snorted and shook her head. “It usually is. And I wouldn’t know if it was impressive.”

“A fact we can easily rectify.” The smoldering look stopped her breath momentarily, then she came to her senses.

Hecate finished plucking the last few potatoes as she responded. “We’ve already decided that wouldn’t be a good idea.”

She ignored the comment. He had always made his intentions clear and she was the one who had always stopped his advances. Hecate didn’t miss the intrigue on Mount Olympus and knew that an affair with Hermes would have tongues wagging. It wasn’t anyone’s business who she spent her time with, but it was always best to avoid the gossip. Other than her best friend, Demeter, and her daughter Persephone, there weren’t many that preferred the Earth realm to the heavens. Hermes shared her connection to the earth realm and underworld, so they had a lot in common.

“You haven’t been coming around as much.” She tried not to let her tone reflect her disappointment. “I thought perhaps you had grown tired of my company.”

He didn’t respond immediately, causing her to look back and take in his thoughtful expression. When he caught her eyes, he pasted on a smile. “I’ve been busy,” he said with a knowing grin.

“There hasn’t been anything going on in weeks. That seems hard to believe.”

His grin widened, his look satisfied. She felt her cheeks flush but thankfully he didn’t say anything about her comment. He didn’t need any encouragement from her, what had she been thinking?

With a shrug of his shoulders and a wink, he confessed. “You’re right as usual, you can see right through me.”

“If that were the case, I would have known you were coming.”

“True,” he said. And then in true Hermes form, he bounced to another topic. “I’m pleased I’m one of the few who can still surprise you. By the way, those pants I gave you look amazing on you.”

Hecate stood and turned, watching his eyes move from ass to chest height. When his eyes finally made it to hers, her unamused expression made him blush. “They are easier to work in than a dress. I’m actually glad you thought of it.”

Hecate laughed at his tone; he never did stop trying. She imagined that she gave quite a show in his pants, especially since she had sized them for a better fit. The thought of what it did to his “carrot” flustered her.

It was safest to keep the conversation on track. “What brings you here today, Hermes?”

“Can’t a god just stop by and chat with a beautiful goddess?”

“In your case, not really.” She wiped her hands on her trousers, taking a bit of female pride in Hermes attention. He was a beautiful man. There was no denying her attraction, even though she chose not to act on it. “As the messenger of the gods, you aren’t generally the bearer of good tidings.”

“True,” he laughed. “But today, I’m not here on official business, at least not from Zeus.”

“Okay, I’ll bite.” Hecate walked closer, intrigued by his appearance, and the hint of the dimple she had always admired on his masculine face.

“If only I were so lucky,” he muttered with a sigh. She was close enough now to see the bob of his Adam’s apple. She had always made him nervous, and that suited her. Much more than him knowing she was attracted to him as well. He cleared his throat and pretended his last comment wasn’t vocalized. “I’m actually here to ask for your help.”

That got her attention. After she had helped in the war against the Titans, the gods had pretty much left her alone. She thought it was because Zeus didn’t want to be anymore indebted to her than he already was. Her power tapped into the old magick and the Olympians didn’t trust her, even though Zeus owed her his life. Although they were friends of a sort, it was strange to her that Hermes would seek her aid, especially considering that Zeus was his father.

Another step and she was close enough to see the flecks of gold in his crystal blue eyes. She was one of the only goddesses without the tell-tale sign of godhood; her eyes were a rich brown like the other Titans. She had always thought that Hermes eyes were slightly more compelling than the others, especially when combined with his dark curly hair and muscular build.

“Well, I noticed that you haven’t been traveling to the underworld of late.”

“Hades doesn’t need me to help guide the souls of the departed, he has you.”

“Yes, except that’s the thing. There aren’t many arrivals. I got to thinking about the frustrations you’ve had with your crops and saw a common thread. It’s like there’s a whole lot of sowing without much reaping, in all things.”

“Lots of births, but not a whole lot of deaths.” With as busy as she was with her preparations, she hadn’t thought about it until now. He was right.

“Precisely,” he said. “I’m sure it’s Demeter’s fault. Persephone’s as well. Her perpetual happiness is tiresome.”

“She can be rather much,” Hecate agreed. “But she is a sweet girl and doesn’t mean any harm. You are right though; the celebrations have been harder with the lack of seasons. Not having rosemary alone makes celebrating local traditions nearly impossible, especially this time of year.”

“Yes well, I believe that their happiness is harming the planet more than we realize. There needs to be a cycle to all things. The fact that Demeter has things stuck in spring mode is wreaking havoc. You have to agree it was much better before Persephone came along.”

Hecate didn’t like the direction the conversation was heading. She loved Persephone, almost as much as she would her own daughter.

“What are you saying, Hermes? That you want to get rid of her?”

His eyes widened; she was relieved to see he was horrified. “Of course not! I would never suggest such a thing! However, I do have a proposal that I believe will work in both our favors.

Hecate was desperate enough to listen. Hermes had a unique way of finding his way through things. It was one of his gifts. If he had a solution to her produce and herb problems, she would listen. “Go on.”

“It’s common knowledge that Hades needs a girlfriend. If for no other reason that it would get him off my back. Since things have slowed down and there is no longer a need to ferry souls to him, he has me doing all kinds of other odd jobs.”

Hermes rolled his eyes and shook his head in disbelief. “Does it really matter?

“Not unless he has you playing tricks on your father again. The last time you messed with him it almost started a war.”

“I told him Zeus was off limits. He decided messing with my step-mother would be just as much fun.”

Hecate shook her head. “That is entirely worse.” Hera was not someone any of the gods wanted to cross. Her temper was vile. “In that case, I agree that a woman in his life would do him some good. Now that I think of it, he has been pretty grumpy.”

“Grumpy? Is that what you call it?” His exasperated expression made her laugh. “It isn’t funny, Hecate. Do you have any idea how many tedious jobs he can come up with to spend eternity on? He really needs to find something else to focus on.”

“So, what are you proposing?”

“I am proposing that you and I set Hades up with Persephone. They are both single and overdue to fall in love. If they hit it off, then we’ll get rid of both of our problems at once.”