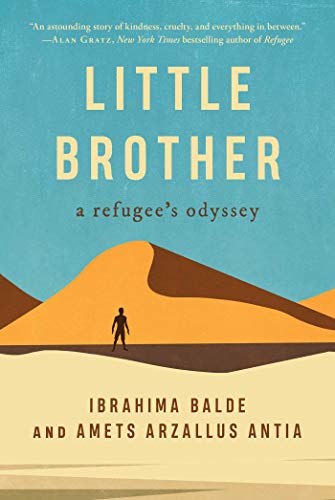 Based on the author's own life, this heartbreaking novel about an African migrant takes you inside the refugee crisis—for readers of The Lost Children's Archive and The Girl with the Louding Voice. Ibrahima is still a boy when his father dies, but as the eldest son he must leave their home village in the Guinean countryside in search of work to support his family. Eventually apprenticed to a trucker in the capital, he learns that his younger brother has dropped out of school and fled to Libya to pursue the dream of finding work in Europe. Leaving behind everything, Ibrahima sets off with the aim to convince his little brother to return home and complete his education. His journey, full of hardships and sometimes on foot, takes Ibrahima north to Mali and across the Sahara Desert to the refugee camps of North Africa—to Algeria, Libya, and then back west to Morocco. Stopping along the way to recover physically or earn money, he encounters untold cruelties as well as kindness. His savings are taken at gunpoint. In the desert, he is held in a prison that serves as a slave market. In Libya, imprisoned again, he is sold to a chicken farmer but escapes for the second time. Only then, in a camp in Algeria, does he learn that his brother may have drowned attempting to cross the Mediterranean. Grief-stricken, burdened by guilt, and unable to face his mother, he too arranges passage across the sea in a Zodiac. The author, Ibrahima Balde, was rescued at sea and found refuge in the Basque Country of Spain. Based on his true-life story told to a traditional bard from the Basque Country and retold here, Little Brother is a deeply moving, eye-opening novel that gives voice and a face to the refugee crisis, illuminating the plight of migrants from many lands.