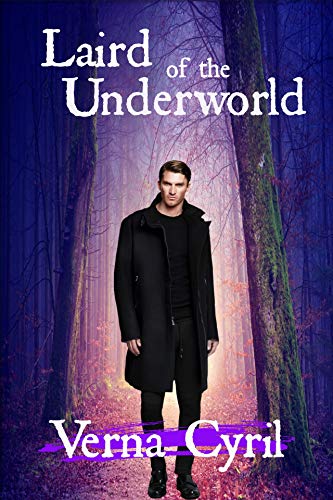 Laird of the Underworld : Book 1

Meet Alaric, the defender of his people and leader of his pack; a bloodthirsty bloodline of vampires who dominates everything including their women. He is eager to claim his long-awaited prize, his fiancée, Genevieve. A golden-haired half-mortal half-vampire promised to him by his father.

The hapless Genevieve only learns of her grim fate on the night before her wedding and is helplessly dragged to the altar to be the wife of a perfect stranger, whom she thinks is a vampire! Genevieve is unaware of her abilities and is struggling to unravel her family's dark secrets. In the midst of peril, she is forced to seek refuge in the arms of this mysterious stranger and give up everything she has known.
Laird of the Underworld is an epic fantasy tale of arrange marriage, action, and suspense.

“What are you, what do you want from me?”. Feeling helpless, Genevieve faced him, holding unto the door to keep herself from shaking.
Alaric slowly lifted the hood off his head. Genevive gasped. He was provocatively handsome with appealingly bronze skin, dark black straight hair fell over the nape of his neck. A few strands fell casually over his forehead. Attractively messy hair, Genevieve thought. She also noticed that his eyes were amber all over again. She continued to feast on his features. His jawline was strong and his lips were deliciously inviting. For the first time, Genevieve squirmed, a surge of heat rushed down her stomach and shot between her thighs creating unfamiliar sensations. She became oddly uncomfortable as he stared back at her. She ran her hand through her hair and moved away from the door.
“Soon”, he promised, his eyes never leaving hers as he moved his hands over the piece of furniture next to him.
Startled, Genevieve gazed at him blankly, confused.” What do you mean by soon.”
Alaric ran his eyes over her excitedly. “Our union shall be consummated soon.”
Genevieve blushed. She cleared her throat. “What the heck are you referring to?”
Alaric smiled lopsidedly. Genevieve's knees buckled under her. No one had ever had such an effect on her before. She knew she was making a fool of herself.
“We shall be married by this afternoon”, he said as he walked past her. “The women are coming right now to adorn you.”
Genevieve began hyperventilating. She could not believe what she had just heard.“There must be some mistake”, she yelled. “I can't marry you!”
Unamused Alaric opened the door to leave the room. He had decided to exit through the door, considering the fact he didn't want her to swoon. Their wedding was in little but two hours.
“ Wait!..”, Genevieve whimpered, not sure how to stop the madness.
Alaric paused, his back turned to her.
She flinched. The room suddenly felt smaller, women and children surrounded her. Genieve gawked. They came out of nowhere. She turned towards the door again. He was gone. Tears rolled down her cheeks as she whispered in disappointment. “I don't know your name.”