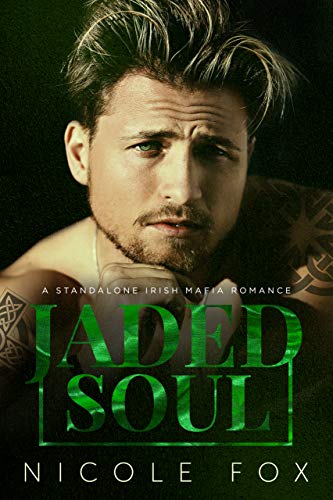 Thirteen years ago, I killed a man to protect her. She repaid me by ruining my life.

I’m a different man now.
Darker. Deadlier.
And as the heir to the throne of the O’Sullivan mafia…
I’m coming back to reclaim what’s mine.

Saoirse looked me in the eyes the day I was exiled and told me to run for my life.
This time around, the tables are turned.
She’s the one in the jail cell.
I’m the one with the world at my fingertips.

If she thinks I’m here to rescue her, she’d better think again.
I didn’t beat death just to kiss and make up.
I came back to give her what she gave me:
The greatest pain she’s ever felt.

JADED SOUL is a standalone second chance mafia romance. It follows Cillian O’Sullivan, the exiled black sheep of Ireland’s O’Sullivan crime family, as he returns home for the first time in thirteen years, and the girl he was forced to leave behind.