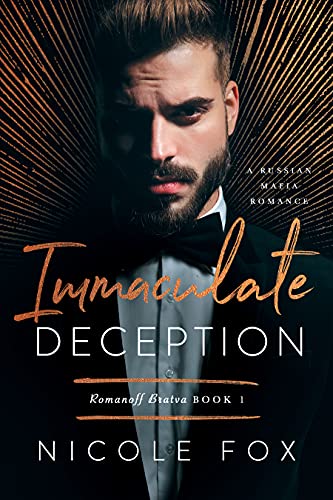 MY LIFE WAS ONE PERFECT LIE. UNTIL THE DON BURST IN AND TORE IT ALL APART.

He broke into my clinic late one night and made me his.
Nine months later, I’m on the side of the road giving birth—and who do I see stopping to help?
The mobster.
The monster.
The man who made me beg for more—and then left before I ever got his name.

He doesn’t realize who I am. Where I’m from. What I’ve done.
But I’ve got secrets that I’ll die to keep safe from him.
Starting with this:
That’s our baby in his arms.

IMMACULATE DECEPTION is a secret baby romantic suspense novel. It is Book One of the Romanoff Bratva Duet. Arya and Dima’s story concludes in Book Two, IMMACULATE CORRUPTION.