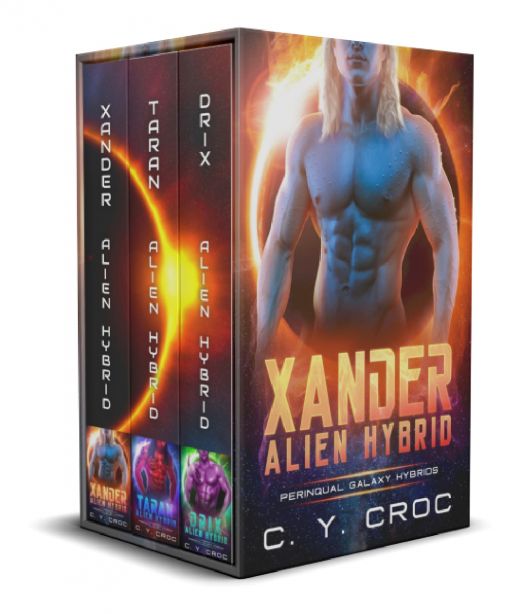 "No other females awoke my passion until her!"

Xander runs a fighting dome with his uncle on the colonized Planet Desra. The fighters are all female and they are all prisoners, purchased from the vile rat-like aliens the Taraquets, who transport them to the prison planet Prismn. They have two choices, either go straight to Prismn and see out their sentences or be sold to Xander, to fight in his dome for their freedom.

Fenolla wakes up on a new planet surrounded by a multitude of aliens, and none of them speak her language - but that is not the biggest surprise. The biggest shock is that she's being held prisoner by a 7 ft white haired blue alien with a rattling tail, skin bumps that raise with his temper and body bone blades.
He wasn't the one to abduct her but he sees potential in her to help him get the dome off his uncle.

Will the chance to do her dream job as fight trainer lure her? Will her attraction to her alien capture get in the way of her bid for freedom? Will she want to leave?

"I want to protect her. I don't want any other male touching her - but I can't let my guard slip!"

Taran is an undercover Federation officer on Planet Desra.
An assignment places him in an exotic dancing club where he's exposed to illegal female trafficking and an unknown species with curves that he's only dreamt about.
As bodyguard to all the females forced to dance there, Taran finds himself drawn to the unknown female species in particular.

However, his assignment is not to stop the illegal trafficking, yet he's determined he's going to help the females before his mission ends - especially the small female with the curves that drive him wild each time she dances.
But whatever he does he mustn't let his guise slip or he might put them all in danger.

Kimberley thought her exotic dancing days were history, but as she heads off to start her new life in the army she's abducted by short hairy rodent faced aliens. Now, she's made to dance against her will, and this time the club's in a different galaxy.

Being forced to dance again is only made bearable because a hot 7ft red alien with long black dreadlocks, tattoos and a spikey tail becomes her bodyguard.
If only she can get him to notice her, then being stuck in another dimension wouldn't seem so bad after all.

"This unknown female species repulses me - yet I have a carnal desire to make her my mate!"

Drix is ecstatic his clan have decided to revive an outlawed female hunting game. But when the clan's leader brings back a mixed group of females he's disappointed by the offerings and especially with the small pathetic unknown species with translucent pale skin. She repulses him the most.

Yet, something in her fragility stirs emotions in him, and he has carnal thoughts of her - thoughts he can't ignore. The only thing is, their leader has invited a rival clan of Prumiqions to join in with this prestigious occasion and their leader also has his eye on her.

Let the games begins - she will be his!

Marcella cannot believe what is happening. One minute she is out running in the woods and the next she is tied up with a group of terrified alien women on a spaceship.

But when they are all dumped in the middle of strange forest, it's not the terrifying shrieking coming from the forest depths that frightens Marcella, it's the huge purple alien who has horns jutting from his shoulders and elbows, a chest covered in scars, and a look of disgust in his eyes whenever he rakes them over her body - that's what sends shivers down her spine.

Now she and the others must run a race for their lives, because if they are caught by any of the alpha male aliens - God only knows what will happen to them!