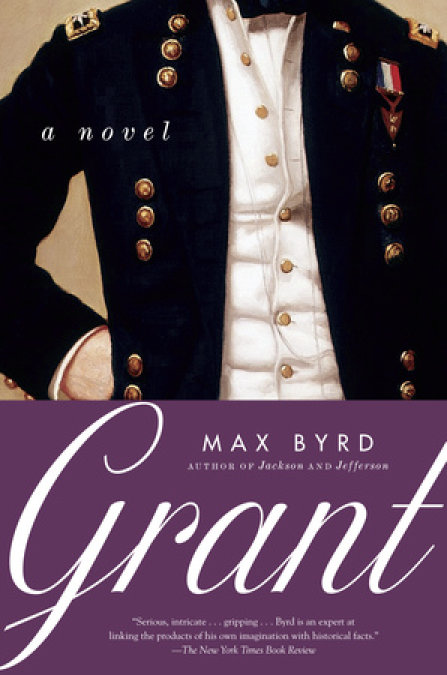 Max Byrd, the renowned author of Jackson and Jefferson, brings history to life in this stunning novel set in America’s Gilded Age. Grant is an unforgettable portrait of a colorful era—and the flawed, iron-willed, mysterious giant at its center.

Ulysses S. Grant pursued a tragic war to its very end. But his final battle starts in 1880, when he loses his race to become the first U.S. President to serve three terms, goes bankrupt, and begins a fight against cancer that will prove to be his greatest challenge. Through journalist Nicholas Trist, readers follow Grant’s journey—and along the way meet Grant’s sworn enemy Henry Adams and Adams’s doomed wife, Clover, the old soldiers Sherman and Sheridan, and the always clever, always scheming Mark Twain. Revealed here are not only the penetrating secrets of our eighteenth president, but the intimate power-brokering that led to the end of Grant’s career, setting the stage for a new era in American history—one defined by politics, not warfare.

“Serious, intricate . . . gripping . . . Byrd is an expert at linking the products of his own imagination with historical facts.”—The New York Times Book Review

“With the license and gifts of a first-rate novelist, Max Byrd has managed in Grant to reveal the man far better than those who have tried before.”—San Francisco Chronicle

“A vibrant, stunning story of Grant’s last years, but best of all, a gripping tale of ‘the reborn nation on the other side of the war.’ ”—Civil War Book Review

“Splendid . . . nothing less than a visit with greatness.”—Associated Press

“Historical fiction doesn’t get any better than this.”—Booklist

"An author," said Maudie Cameron, aged ten, wearing a crisp white pinafore and an expression of pug-nosed disdain, "is a dreadful person who writes books."

Nicholas Trist III scratched his chin stubble with the palm of his hand and studied a crystal decanter of amber-brown whiskey just to the child's left, on a tabletop otherwise uselessly cluttered with little colored porcelain figures of cats and dogs in bonnets.

"My father never reads books," Maudie said. "He says books are a damn-blasted waste of time."

"That's quite enough, Maudie." The child's governess was knitting or sewing or vivisecting something furry and blue in her lap, and without actually looking up she narrowed her eyes in a professional frown. Trist caught a glimpse of his own red-rimmed eyes in one of the room's six mirrors. He placed his hand on his knee and stood up and dropped his hat.

"You wrote a book," Maudie said.

"But nobody read it," Trist assured her. Despite himself he licked his lips. Three steps to the decanter. Five steps to the door. Five thousand steps back to the steamship docks at Baltimore. His hat somehow found its way to his fingers again. There were four separate kinds of malarial fever according to the drunken Arab doctor he had seen in Marseilles, and Trist had managed to come down with the least severe but the most persistent strain, though for the life of him just now he couldn't remember the technical Latin name of it.

"Are you, in fact ... an author, Mr. Trist?" The governess had put down her knitting and was making apologetic little flutters with her hands. "I understood you were Senator Cameron's escort to Chicago."

"Journalist," Trist said. In the mirror, by a species of optical illusion, he swayed on his feet.

"Yes. Well." Doubtful flutters now. "I can ring for the Senator's wife -- she knows the Senator's schedule, but he should be home himself any moment."

"You're perspiring," Maudie announced, coming closer. "And your eyes are red." She cocked her head like a sparrow on a curb. "And you haven't got one arm at all."

"I wonder," Trist said unsteadily to the governess, and stopped to rub his brow with his hat. "A little touch of illness from the ship," he said, "overheated, ocean voyage." He gestured vaguely toward the window, which opened onto the redbrick elegance of Lafayette Square, Washington, D.C., at present not overheated but overcast with low, fat afternoon clouds the color of avocados, at present showing no ship at all anchored under its leafless gray trees. In the center of the Square a colossal bronze statue of his stepfather's old boss Andrew Jackson reared his horse and tipped his tricorn hat to a squadron of pigeons.

The governess had tended a hundred feverish children. She pulled a silken bell cord behind the whiskey decanter and scooped young Maudie out of harm's way, germ's way. Instructions flew. Doors rapidly opened and closed; a black maid in a black uniform hurried down a hallway in front of him, pointed wordlessly to a door, and disappeared. Trist nodded his thanks to the empty corridor, then slumped his back against the wall.

In one pocket of his coat he had seventy-three dollars in new American greenbacks, a handful of useless French sous, and six paper packets of Dr. Susens' Patented Tropical Miracle Quinine Powder. In the other pocket he had a dented brass flasket of miracle brandy. The sweat was now running down his cheeks and neck and under his shirt; he was starting to melt from the top down, like a candle. This was the classical pattern -- fever first, then Dizziness, Chills, Trembling Extremities, La Nausee. Dr. Susens listed the symptoms briskly and unsympathetically on the packet and recommended one dose every four hours, taken with two tumblers of water. Trist used his teeth to tear open a packet, licked the bitter quinine crystals from his hand like a dog, and then uncapped the flasket and swallowed steadily for as long as he could stand it, till brandy spilled over his chin and leaked out his pores. The Arab doctor had suggested a mixture of arsenic powder and chalk instead of quinine, but in the war Trist had seen arsenic used as a poison as well as a medicine; if he was going to poison himself, it might as well be with brandy.

He wiped his mouth with his sleeve and braced himself against the wall. Brandy worked fast. He could already feel his veins start to crackle and light up like burning twigs. Quinine made him excitable. He glanced at the dark little privy behind him -- what else did you expect of a United States Senator in the year 1879 if not modern indoor plumbing? -- and then pushed away from the wall and began to walk. Because he ought to be there, waiting, when Senator Cameron arrived, a journalist ought to be on time and waiting.

He passed one closed door, a second, turned a corner, and stopped. In a house ten minutes and lost. Trist took another swallow of brandy. The corridor was at least fifty feet long and ended at a heavily curtained window. There were three dim gas lamps spaced on brackets along the wall, but they did little to dispel the inky gloom. Trist had the sensation of walking downhill, as if into a mine. He passed another mirror where somebody's flushed and overheated face floated in the black glass like a burning moon. In his first command in the war, in the summer of 1863, three-fourths of his troops had caught either dysentery or malaria. He blinked at a pencil-thin streak of light creeping under the bottom of a door six feet away. In the war, Senator Cameron's father had been something important in Lincoln's cabinet. Trist moved toward the light and tried to remember the story. The older Cameron was a Pennsylvania politician with a reputation for wholesale thievery. When Lincoln asked a colleague if Simon Cameron was likely to keep it up in Washington, the colleague had scratched his head and said, well, Simon probably wouldn't steal a red-hot stove. When Cameron demanded an apology, the colleague declared, I did not say you wouldn't steal a red-hot stove.