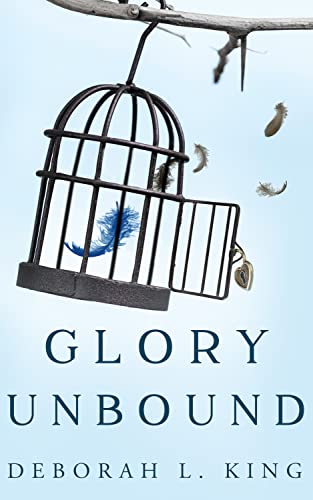 When Glory Bishop is offered a new life by a seemingly altruistic Chicago socialite, there may be more than good intentions at play. Against the advice of trusted friends and family, Glory chooses the protection of Malcom Porter, her adoring, much older bad-boy-turned-minister fiancé.

Thrust into a gilded world of wealth, society, and privilege, Glory struggles to overcome the guilt of loving her new life. The whirlwind of 1980s designer clothing, penthouse views, and first-class travel is a far cry from her former existence.

With this new reality comes unexpected complications and temptations. As she struggles to remain true to herself and her fiancé, Glory wonders if she will ever truly feel at home in this new world. Follow Glory Bishop in her search for freedom and independence as she strives to be her own savior.
Read more

Deborah King has been a writer and storyteller her whole life. She published her first short story when she was seven years old. Her writing runs the gamut from poetry and women’s fiction, to espionage and science fiction. When she’s not writing, Deborah enjoys cartoons, cooking, photography, and Star Trek. Born and raised in Chicago, Deborah has managed to achieve all of her childhood dreams and still lives in the area with her husband and two youngest children. According to her daughter, she has “literally aced her life!”

Each step she took, she prayed the cuts and welts wouldn't start bleeding again. Fighting against the biting winds of the frigid February night, with her bracelets jingling softly, Glory tried to pick up her pace, but the moist bandages on her legs rubbed against her long skirt and loosened. Her head ached from that fall against the metal bed frame, and the gauze covering the gash was barely enough to staunch the blood flow. The purging shouldn’t have been a surprise. She must have been possessed by demons to say the things she’d said to her mother. Did demons of doubt make me question God’s will?

“What if God sent somebody else for me?”

Did demons of disrespect loosen my tongue and cause me to speak against Malcolm?

Did demons of worldliness make me forget my place, make me ungrateful, make me argue?

Pulling her collar tighter, Glory walked the two blocks up Seventy-Fifth Street to the store with the pay phone. She had no idea who she’d call. She wished she could call her friends Tressa and Christy, but having no phone at home, she hadn’t bothered to learn their numbers. She could call the salon, but her boss and best friend, Herschel, was not likely to be there on a Monday night, and what would she tell him? He’d want her to go to the hospital, but that was out of the question. And what would I tell a doctor? They might lock her up if she said she was injured in a demon purge.

Glory shivered. The small movement sent lightning bolts through her aching head and caused her undershirt to rub against the open wounds on her back that she hadn’t been able to reach. That old extension cord, cracked and jagged in places, had scraped across her skin, raising welts and opening cuts, digging into the flesh on her left side, arm, and leg and on her back. Her mother wielded the weapon, shouting prayers to bind Glory’s demons, and Glory sobbed and screamed for Jesus and begged for mercy. And when she could scream and cry no more, when she had no energy left to fight, when the pain was so much that she could no longer feel it, Glory drifted off to sleep while her mother pressed a pillow over her face to see if God would take her this time.