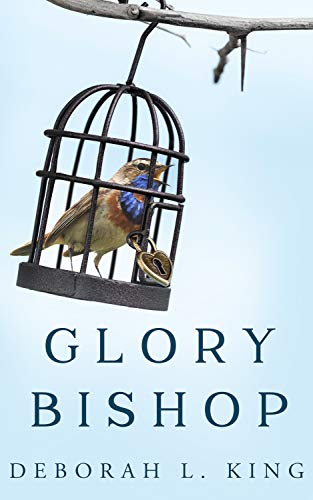 "Deborah King has written a compelling, thought-provoking novel that engages readers and made me wish the story would never end." -Chicago Writer's Association Windy City Reviews

Glory Bishop lives her life in pieces. At work and with her friends, she reads novels, speaks her mind, and enjoys slow dances and stolen kisses with her boyfriend, JT. But at home, Glory follows strict rules and second-guesses every step. Though she dreams of going to college and living like a normal teenage girl, her abusive mother has other ideas.

When JT leaves to join the navy, Glory is left alone and heartsick. The preacher's son, Malcolm Porter, begins to shower her with lavish gifts, and her mother pushes Glory to accept his advances. Glory is torn between waiting for true love with JT or giving in to the overzealous Malcolm.

When a stranger attacks Glory on the street, Malcolm steps in to rescue her, and her interest in him deepens. But the closer she gets to him, the more controlling he becomes. Glory must eventually decide whether to rely on others or to be her own savior.

Deborah King has been a writer and storyteller her whole life. She published her first short story when she was seven years old. Her writing runs the gamut from poetry and women’s fiction, to espionage and science fiction. When she’s not writing, Deborah enjoys cartoons, cooking, photography, and Star Trek. Born and raised in Chicago, Deborah has managed to achieve all of her childhood dreams and still lives in the area with her husband and two youngest children. According to her daughter, she has “literally aced her life!”

She was standing at a softly rumbling dryer, folding “mountain fresh” scented towels, when she heard the door opening behind her.

She continued folding, pretending not to hear.

She would not give that devil’s son the satisfaction of responding.

The door closed, and she hoped he’d gone, but then he was behind her… his arms around her waist… his lips touching her shoulder. “Remember the first time you let me kiss you? You said you’d be my wife.”

Glory shrugged off the kiss and tried to ignore him—tried not to notice his scent or relax in his arms. She tried not to respond to his voice… tried not to care.

His lips touched the back of her neck. “Remember the second time you let me kiss you? You said you’d be my girl.”

Glory deliberately brushed his kiss from her neck and moved to the washing machine, careful to keep her back to him.

“Oh… so it’s like that now, huh? No problem. I’ll just sit down and watch you work. I’ve got all night. And you know, I always did appreciate you from behind, too.”

Glory growled under her breath, taking her annoyance out on the wet towels she pulled from the washer. She heard him sigh loudly as he settled down on the old couch. She whispered a prayer for patience and strength.

Glory continued her work and tried to ignore him as he flubbed his way through “Ribbon in the Sky” and “Isn’t She Lovely,” but when he started singing “Brick House,” she threw down the towel she was folding and gripped the edge of the table.

“Oh… so you’re talking to me now, huh? I win big. I get to hear your pretty voice and look at your fine a—”

“No!” Glory turned to face him, arms folded, seething, channeling every bit of hurt and anger into a glare that she wished would burn him to cinders. “No. I’m not talking to you. I’m asking the devil to leave me alone! I’m asking Satan himself to leave me alone and never speak to me again.”

“Well,” he said, standing and moving toward her. “Your prayer is gonna be answered. I’m leaving for the navy tomorrow.”

He smiled. He actually smiled. That no-good lying two-timing devil smiled his smug smile—that I’m the finest boy in the world, and I know you agree smile. That I win smile.

Glory opened her eyes. The smug smile was gone—no mocking, no joking, only the slightest hint of a plea in his voice and in his eyes—the force of will that always made her trust him… or used to make her trust him.

Glory sat away from him on the couch, arms still folded, not looking at him. She listened to his tale of a weekend with his cousins and wine and reefa and the twenty-two-year-old next door and his not really remembering it until his aunt called his mother about a baby that looked like him. She tried to stay angry and to push him away when he knelt in front of her, begging forgiveness. She tried not to see the tears in his eyes.

“I was scared. I didn’t want to hurt you. I knew you’d be mad, and I couldn’t fix it. I didn’t have a do-over for this.” He dropped his head and laughed a little. “I was outta Barbie shoes.” JT laid his head on her lap, and despite herself, Glory began stroking his hair.

“Why haven’t you been back to church? It’s been months. Your mother brings the baby with her. Why don’t you come? Are you ashamed?”

“No,” JT said, a bit of anger in his voice. “I just don’t believe in their God no more. I made mistakes—I always make mistakes, but my God forgives me. That church don’t. You said it yourself: they think I’m the devil. They want me to stand up there and apologize for having a son. Not happening. The only people I need to apologize to are my mama, you, and maybe my son. Everything else is between me and God.”

“I hate when you talk like that. How can you question God, Josiah?” Glory stood up, pushing him away.

“I’m not questioning God. I think I’m actually understanding God.” He followed her to a dryer, helping move the warm towels to the folding table. “Think about it. God made this big, beautiful world, and that church tells you that loving the life God gave you, or anything God made, is evil. I think that’s dissin’ everything God does right now—”

“Um… it’s Michelle.” His voice wavered slightly when he spoke the name of his baby’s mother. He was all confident, challenging God, but not when he talked about his own sin. Good. He should be ashamed of himself.

“You could marry her. Give your son a proper fam—”

“Girl, are you crazy? God, no! She already got three kids. She don’t want no part of this baby, and… well… just no.” Before Glory could pick up another towel, JT pulled her into his arms, mischief shining in his eyes. “And besides… I’m already married, remember, Mrs. Glory?”

“Well, actually,” Glory said to that self-satisfied smiling face she loved and hated, “my daddy said that since you didn’t ask him first, and you didn’t have a job, we’re not really married.”

“But you let me kiss you, so we are.” He kissed her lightly on the lips. She didn’t pull away.