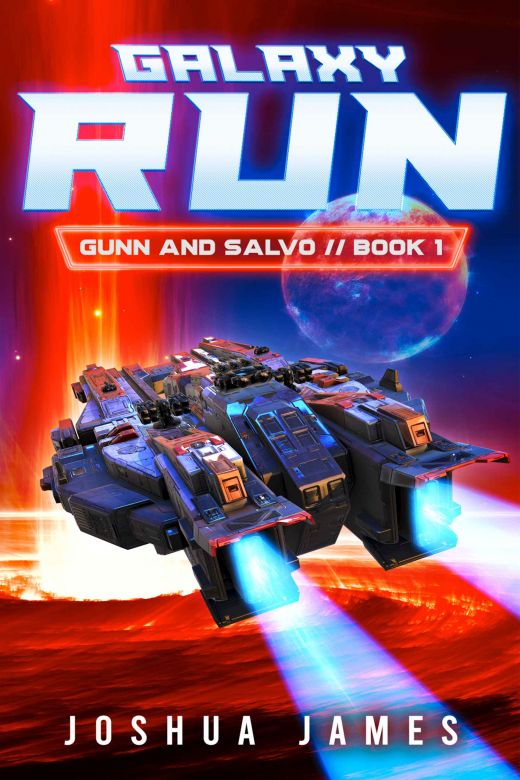 Joshua James Founding author
Follow
When deep space bounty hunters chase down a teen linked to a catastrophe, something is off.
Genres: Science Fiction
Buy now
Available in:

When deep space bounty hunters Gunn and Salvo chase down a teenager linked to the catastrophic loss of a space station, everything about the job feels off.They're used to greedy people lying to them. But honest people who should know better? That's new.So they do the one thing you don't do in their line of work: Ask questions.Before they know it, they're the ones with a galaxy-wide bounty on their heads ... and the fate of humanity in their hands.Galaxy Run is a sci-fi thriller featuring a pair of (mostly) honest bounty hunters, a not-so-innocent teenager, and a sadistic enemy hellbent on destruction.

Helmsman Simeon Dantry stepped over a pair of blood-soaked bodies sprawled on the deck.

That isn’t right. Is it?

But when he sat down at his station and looked again, his vision went fuzzy. His head was pounding and he couldn’t think why.

That isn’t right either, thought Dantry hazily. We shouldn’t be going that way, we should…

His hands were already moving to do as he’d been told.

Usually the supply ship Phoebus hopped from station to station like clockwork. This time, they’d set out in utterly the wrong direction.

“Estimated arrival?” the captain asked. When Dantry turned to look at her, he saw that her eyes were glassy and unfocused.

“Three days,” said the navigator seated to Dantry’s right. Her voice was flat, and when he glanced at her face, he saw that it was as blank as the captain’s.

We’re acting like mods, thought Dantry. Every action felt automatic, but not out of muscle memory. More like he was moving because he didn’t have a choice, or because someone else had chosen for him.

Dantry tried like hell to remember where they were headed, and failed. It was something to do with their passenger.

That clicked somewhere in his brain. Passenger. Since when did cargo vessels take on passengers?

As if summoned by Dantry’s thoughts, the door to the command center opened, and their passenger stepped through.

He was tall and slender, dressed in a fine charcoal suit that struck Dantry as archaic. His hair was long—not excessively so, but it clearly required care, unlike the buzz cuts most of the working crew favored. A yellow signet ring glimmered on one finger; even though he knew better, Dantry thought it looked like real gold. Impossible, of course, but he still felt a feral pang of jealousy whenever it caught the light.

Everything about their passenger was impractical and preternaturally clean. It wasn’t right.

“Good morning,” he said smoothly, scanning each of their faces with his cold, pale eyes. “Are we making proper time?”

“Yes, sir.” The captain’s voice sounded like an echo of itself. “Within three days, we’ll dock at Ilium, and then…”

Her eyes narrowed, as if she was trying to remember something that wouldn’t come. Dantry wondered if she felt the same way he did: that something was wrong, and that she could only half-remember why.

“Captain, you’re doing an excellent job,” said their passenger soothingly. “I trust you’ll get us to Ilium right on schedule.” He ran a hand over the back of her head, a strangely intimate gesture, one that set Dantry’s teeth on edge.

Within moments, her eyes glossed over again.

Satisfied, their passenger withdrew, clasping his hands behind his back. “When we reach Ilium, you will dock at the port and wait for me. We’ll be staying here a few days.”

She should have stayed quiet. Their passenger turned to her, soft smile still in place, but the navigator withered under his gaze.

“Is this a problem, officer?” asked the man, whom Dantry had begun to expect was not a man. A mod, maybe? But could mods get inside your head?

“No problem,” said Parris. Her gaze darted around the room helplessly, but nobody came to her rescue. “I only… I was only thinking about the supply line. Kri’s waiting on this synthsteel shipment.” The more she spoke, the clearer her expression became. “Kri. Weren’t we supposed to be going to Kri? When did our plans change?”

Don’t let him touch you, thought Dantry wildly. There had been others on the bridge crew. Where were they? Something had happened to them, he thought, but it was so hard to remember…

Parris raised her arm as if to ward off a blow, but the passenger simply gripped her wrist and pulled her arm aside. These was no violence in the movement, but Parris whimpered. His hands found the back of her head.

No, thought Dantry madly, you have to stop him before he…

It was too late. Parris slumped toward him, looking up at him as if he was an old lover.

“Is the route to Ilium very complicated?” the passenger asked.

“Then we don’t really need a navigator, do we?” He leaned closer and whispered something in her ear.

Parris was still smiling vacantly when he stepped away. He nodded once.

Parris smashed her face against the controls.

For a split second, Dantry considered stopping her, grabbing her by the hair and pulling her back… if only his hands would move.

She brought her forehead down again, this time so hard that Dantry heard a crack as her forehead collided with the dash. When she reeled back, he could see where her forehead had split open along the edge of the console.

“This will take much too long,” said the passenger, sounding bored. “You’ll have to try harder.”

Stop, thought Dantry, because his mouth wouldn’t let him say it.

Parris leaned all the way back in her chair, and then, with the full force of her body weight, threw herself down. Her nose connected with the counter, forcing it back up into her skull, and her neck bent at a nightmarish angle.

“Perfect,” said their passenger, turning away. “I prefer a skeleton crew.”

Parris was making a small sound, almost like a baby, that grew wetter and fainter by the moment.

Just before Dantry let the last bit of his conscious mind slide beneath the surface of the lingering fog, he remembered why they were going to Ilium.

They were looking for the girl.