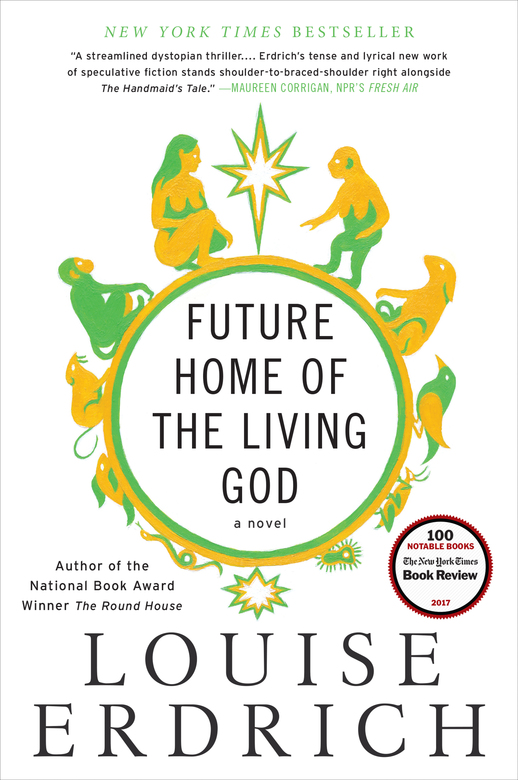 Louise Erdrich, the New York Times bestselling, National Book Award-winning author of LaRose and The Round House, paints a startling portrait of a young woman fighting for her life and her unborn child against oppressive forces that manifest in the wake of a cataclysmic event.

The world as we know it is ending. Evolution has reversed itself, affecting every living creature on earth. Science cannot stop the world from running backwards, as woman after woman gives birth to infants that appear to be primitive species of humans. Thirty-two-year-old Cedar Hawk Songmaker, adopted daughter of a pair of big-hearted, open-minded Minneapolis liberals, is as disturbed and uncertain as the rest of America around her. But for Cedar, this change is profound and deeply personal. She is four months pregnant.

Though she wants to tell the adoptive parents who raised her from infancy, Cedar first feels compelled to find her birth mother, Mary Potts, an Ojibwe living on the reservation, to understand both her and her baby's origins. As Cedar goes back to her own biological beginnings, society around her begins to disintegrate, fueled by a swelling panic about the end of humanity.

There are rumors of martial law, of Congress confining pregnant women. Of a registry, and rewards for those who turn these wanted women in. Flickering through the chaos are signs of increasing repression: a shaken Cedar witnesses a family wrenched apart when police violently drag a mother from her husband and child in a parking lot. The streets of her neighborhood have been renamed with Bible verses. A stranger answers the phone when she calls her adoptive parents, who have vanished without a trace. It will take all Cedar has to avoid the prying eyes of potential informants and keep her baby safe.

A chilling dystopian novel both provocative and prescient, Future Home of the Living God is a startlingly original work from one of our most acclaimed writers: a moving meditation on female agency, self-determination, biology, and natural rights that speaks to the troubling changes of our time. 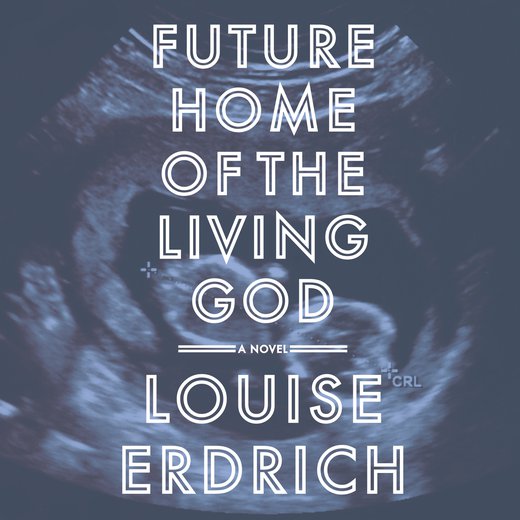 When I tell you that my white name is Cedar Hawk Songmaker and that I am the adopted child of Minneapolis liberals, and that when I went looking for my Ojibwe parents and found that I was born Mary Potts I hid the knowledge, maybe you’ll understand. Or not. I’ll write this anyway, because ever since last week things have changed. Apparently—I mean, nobody knows—our world is running backward. Or forward. Or maybe sideways, in a way as yet ungrasped. I am sure somebody will come up with a name for what is happening, but I cannot imagine how everything around us and everything within us can be fixed. What is happening involves the invisible, the quanta of which we are created. Whatever is actually occurring, there is constant breaking news about how it will be handled—speculation, really, concerning what comes next—which is why I am writing an account.

Historic times! There have always been letters and diaries written in times of tumult and discovered later, and my thought is that I could be writing one of those. And even though I realize that all lexical knowledge may be useless, you’ll have this record.

Did I mention that I’m four months pregnant?

Nearly a decade ago and almost two months into my first pregnancy, I had an abortion. I am telling you because it is important that you know everything. My decision came about the instant I took the dipstick test—no. I would close this door. In doing so, I opened a different door. If I hadn’t had an abortion then, I would not be having you, now. This time the dipstick test filled me with yes.

So I am twenty-six, pregnant, and I haven’t got health insurance. This would completely upset my parents, who actually have more than they need. It is also, without question, a perilous time in the history of creation. Unless the swirling questions are answered soon, you will be born into this unknown state. But whatever happens, you will be welcomed with eager arms into a family that spans several cultures. There are first of all my adoptive parents, whose lyrical name is of British origin. Glen and Sera Songmaker. They are truly beautiful people, there is no doubt, no question, and although I’ve given them a great deal to worry about, they’ve dealt gracefully with me for the most part. They are forgiving people, Buddhists, green in their very souls. Although Sera is annoyingly phobic about food additives, and many years ago Glen had an affair with a Retro Vinyl record shop clerk that nearly tore the family apart, they are happily married vegans. They are the dearest people imaginable, except … Except I’ve never understood how I was adopted—I mean, the legality there is definitely to be questioned. There is this law called the Indian Child Welfare Act, which makes it almost impossible to adopt a Native child into a non-Native family. This law should have, even had to, apply to me. Whenever I mention it, Glen and Sera hum and look away. Even if I scream, they don’t look back. Still. They are good parents, they will be wonderful grandparents, and you’ll have aunties and uncles and a whole other set of bio-based grandparents, the Potts.

As I mentioned, yes, I denied and disregarded the knowledge of my biological family for a short time, but perhaps you’ll understand if I explain how my ethnicity was celebrated in the sheltered enclave of my adoptive Songmaker family. Native girl! Indian Princess! An Ojibwe, Chippewa, Anishinaabe, but whatever. I was rare, maybe part wild, I was the star of my Waldorf grade school. Sera kept my hair in braids, though I famously chopped one off. But even one-braided, even as a theoretical Native, really, I always felt special, like royalty, mentioned in the setting of reverence that attended the study of Native history or customs. My observations on birds, bugs, worms, clouds, cats and dogs, were quoted. I supposedly had a hotline to nature. This continued through high school, but waned, definitely waned, once I went to college and hung out with other indigenes. I became ordinary, then. Even worse, I had no clan, no culture, no language, no relatives. Confusingly, I had no struggle. In our talking circles, I heard stories. Addictions. Suicides. I’d had no crises in my life, besides the Retro Vinyl clerk, so I invented one. I chopped off both braids, then stopped going to classes. I’d been a snowflake. Without my specialness, I melted.

One year ago, perhaps thinking that my lack of ambition regarding a degree stemmed from confusion about my origins, perhaps thinking who-knows-what, Sera decided to give me a letter that she had received from my biological mom.

Honorable Sera, she had not opened it. I did. I read the letter twice and put it back in its envelope. Then I put the envelope in a manila folder. I am a very organized person. I decided to file the letter. Under what? I needed a label. I thought about that for a while. Biological Family? Potts? How about Immense Disappointment? How about FUCK YOU? It was upsetting to be contacted, after all. And there was worse. It was a shock to realize that on the reservation I was even more ordinary than I’d felt myself to be in college. My family had no special powers or connections with healing spirits or sacred animals. We weren’t even poor. We were bourgeois. We owned a Superpumper. I was Mary Potts, daughter and granddaughter of Mary Potts, big sister to another Mary Potts, in short, just another of many Mary Potts reaching back to the colonization of this region, many of whom now worked at the Superpumper franchise first stop before the casino.

What was I to do? Until this biological confusion, until my pregnancy, until this great uncertainty that life itself has suddenly become, I’ve hidden the fact that I even opened the letter. I’ve told my Songmaker parents that they raised me, I love them, and that is final. I’ve told them that I want no complications; I want no issues of abandonment and reconciliation; I want no maudlin reunion, no snake tears. But the truth is different. The truth is I am pissed off. Who are the Potts to suddenly decide to be my parents, now, when I don’t need them? Worse, who are they to have destroyed the romantic imaginary Native parents I’ve invented from earliest childhood, the handsome ones with long, both-sided braids, who died in some vague and suitably spiritual Native way—perhaps fasting themselves to death or sundancing to heatstroke or plunging off a cliff for love or being carried off by thunderbirds? Who were the Potts to keep on living their unremarkable lives without me, and to work in a Superpumper?

I wouldn’t have had the slightest thing to do with them if it wasn’t for my baby. Sweets, you’re different! You’re new. Things can start over with you, and things need to start over. You deserve more. You deserve two sets of grandparents. Not to mention genetic info, which may affect who you are even beyond whatever is now occurring. There may be hereditary illnesses. Or unexpected talents—one can always hope, though that seems doubtful, given my birth mother’s letter. Still, I think you need to enter the web of connections that I never really had.

I embraced Catholicism in my crisis-creating year, at first as a form of rebellion, but also in an effort to get those connections. I wanted an extended family—a whole parish of friends. It was no passing phase and I have integrated both my ethnicity and my intellectual leanings into my faith first by analyzing the canonization of the Lily of the Mohawks, Kateri Tekakwitha, and then by editing, writing, illustrating, publishing, and distributing a magazine of Catholic inquiry called Zeal. I obtain funding for my work through private donations, occasional per capita casino payments, and a small contribution from my church. I’ve got enough to keep the magazine going until your due date, December 25, which also means that I’ve got roughly four and a half months to figure out how to give you a coherent family as well as be a mom.

Your father might help, but I’m trying to keep our distance.

All the more reason to find you an extra grandfather, maybe an uncle or two, a cousin—functional, I hope.