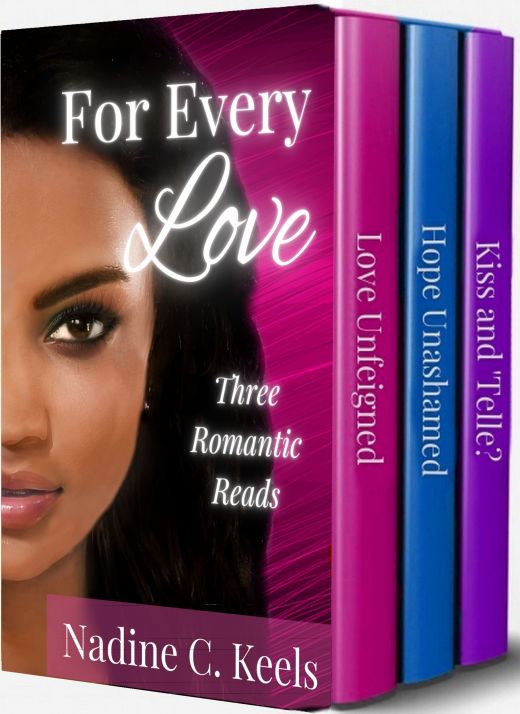 For every love, there is a season—and it’s worth the wait.

There’s homesickness in his kiss…
Back when Lorraine and Isaiah were children, the competitive spark and warm regard between them grew into a strong bond. But they’ve been traversing divided paths in the years since, and a disastrous experience has resulted in life-altering trauma for one of them. Now that Lorraine and Isaiah have reached adulthood, what might it take to reunite them in a love unbounded by time?

He’s never been so mesmerized by a girl before…
Arthur has always kept his focus on his education and career ambitions, but meeting a stunning young lady blindsides his ideas on dating. When he gets serious about romance but his plans fall through, Arthur must realize when it’s time to give up the shame of a broken dream—and learn what it truly means to hope for more.

Kiss and ’Telle?
A friends to lovers romantic comedy

If only this type of thing were as easy as it looks in chick flicks.
Ever since her college days, Chantelle has had growing feelings for Dennis, a close friend who’s got romance coming out of his ears. Or so he says. When he and Chantelle team up for a huge, professional opportunity, it may lead to the perfect time for her to tell him what he means to her. Or it may be time for some of Chantelle’s own words about love to come back to bite her. Oops.

Enjoy these sweet romances of friendship, laughter and pain, and the miracle of second chances.

An Excerpt from Love Unfeigned

A wide smile stole over Isaiah’s mouth. “One step closer to musicals on Broadway, for you.”

I gave an unreserved laugh. “Yeah, and Broadway audiences would chase me off the stage with every tomato and head of lettuce from the produce section, once they heard me try to sing.”

“Oh, come on, I’ve heard you carry a tune or two. You’re not terrible. You could take voice lessons.”

“Sure. Or I could have a voice double hide behind the curtain while I fake it and take the credit,” I suggested, holding up my hand as a puppet, having it mouth along while I started crooning out our school’s fight song, which the band had played at the last pep rally, in my most cartoonish voice.

“Ha! No,” Isaiah cut into the song, reaching over to clamp my puppet’s mouth shut. “You’re too real to fake anything, Bit.”

The words were out, apparently before Isaiah thought to check them. I nearly laughed, but I stopped upon doing a mental double-take, my memory prickling, my smile melting. Isaiah and I sat there looking at each other, his comment hovering in the space between us, his hand enclosing mine. He seemed to vacillate, and then his gaze soberly lowered to his fingers as they moved from around mine, slipping down to take a light hold of my bare wrist.

“You, um,” he began, biting his lip before he went on. “You’re not going to wear the bracelet. Are you?”

It wasn’t really a question, I knew. The morose note that had crept into his tone tugged at my soul. I wished I could smile it off, but couldn’t. “I’m not going to throw it away,” I replied, which was all I could grant him. He had a girlfriend. Or a girl something, already.

At the moment, I didn’t think of the recent dates I myself had been on.

I gently pulled my wrist in toward me, meaning to bid Isaiah to release it, and he did, but he followed the pull before doing so, inclining closer to me, his fingers leaving my wrist to come catch a lock of my hair, resting on my shoulder.

There was no telling how much time elapsed before I had my eyes closed, my head tilted into Isaiah’s hand as his fingers were stroking fondly through my hair, as if they were accustomed to being there. Some mysterious part of me was filling up, making me eerily fearful of drowning, somehow. Isaiah’s hand ran through to settle at the nape of my neck, and I heard the hoarseness in his throat when he said, “Lorraine…baby, I wish I could tell you—”

“Thank you.” My statement was scarcely above a whisper, but it made Isaiah hush. My eyes mistily opened to meet his. I raised my voice a tad. “For your help. I appreciate it. I’ll see what my geometry teacher says.”

I more felt than heard Isaiah’s sigh, more sensed than saw his nod of resignation. His fingertips rubbed wistfully at the back of my head, and he leaned toward my face as he rose from his seat, nudging the hair near my brow out of the way with the tip of his nose. I remembered that natural, up close scent of his, and I liked it.

“You’re welcome,” he answered, his lips pressing a warm kiss to my forehead, leaving behind the invisible but unmistakable imprint of familiarity and homesickness.

Minutes later, I stood in the front door watching while Isaiah went to his car in the driveway, unlocking and opening his door. I was breathing a little too hard; I didn’t want to drown. Isaiah. I saw him pause and stand there for a second, his head turning somewhat, and…