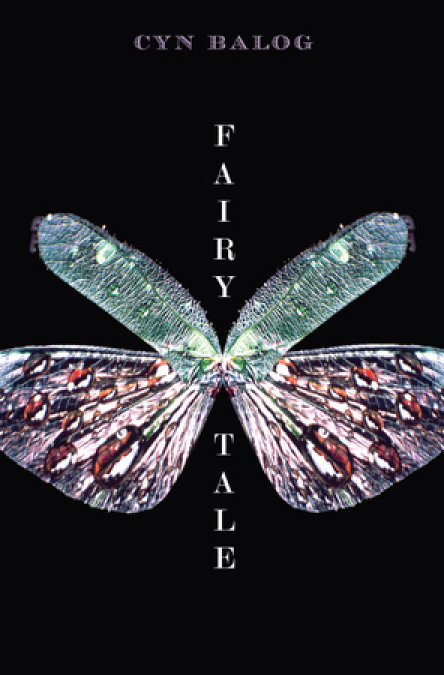 A captivating and witty dark fantasy that will have girls lusting after it.

Morgan Sparks has always known that she and her boyfriend, Cam, are made for each other. But when Cam’s cousin Pip comes to stay with the family, Cam seems depressed. Finally Cam confesses to Morgan what’s going on: Cam is a fairy. The night he was born, fairies came down and switched him with a healthy human boy. Nobody expected Cam to live, and nobody expected his biological brother, heir to the fairy throne, to die. But both things happened, and now the fairies want Cam back to take his rightful place as Fairy King.

Even as Cam physically changes, becoming more miserable each day, he and Morgan pledge to fool the fairies and stay together forever. But by the time Cam has to decide once and for all what to do, Morgan’s no longer sure what’s best for everyone, or whether her and Cam’s love can weather an uncertain future.

Maybe because by eleven o'clock on that day, I'd already told Ariana Miles she'd starve to death in Hollywood, Erica Fuentes she'd bomb history, and Wendell Marks that he would never, ever be a part of the A-list, no matter how hard he tried.

Now, sitting in the bleachers after school, half watching a meaningless Hawks football exhibition game and waiting for some nameless freshman to bring me my French fries (psychics cannot work on an empty stomach), I've just about reduced my fourth client of the day to tears (well, Wendell didn't cry; he just pretended to yawn, covered his mouth, and let out a pathetic snurgle). But hey, sometimes the future is scary.

Sierra Martin won't look at me. Instead, she's taken an unnatural interest in the Heath bar wrapper wedged between the metal planks her sequin-studded flip-flops are resting on. A tear slips past her fake-tanned knees and lands perfectly on her porno-red big-toe nail.

"Sorry," I say, offering her a pat on the back and a couple of orange Tic Tacs for consolation. "Really."

Sometimes this gift does suck. Some days, I have the pleasure of doling out good news--BMWs as graduation presents, aced finals, that sort of thing. Today, it's been nothing but total crap. And yes, it obviously must have come as a shock that I'd envisioned Sierra, whose parents had bred her for Harvard, walking to Physics 101 on the Middlesex Community College campus, but it's not my fault. I just deliver the mail; I don't write it.

I sigh. This is the inevitable question, and I always answer the same thing: "I'm sorry, but I've never been wrong."

I know that probably makes me sound like a total snob, but it's simple fact. Since freshman year, I've correctly predicted the futures of dozens of students at Stevens. It all started way before that, though, in junior high, when I correctly guessed who would win the million-dollar prize on every reality-TV show out there. At times I would have to think, really think, to know the answer, but sometimes I would just wake up and, clear as day, the face of the winner would pop into my mind. Soon, I started testing my abilities out on my friends, and my friends' friends, and before long, every other person at school wanted my services. Seriously, being a psychic will do more for your reputation than a driver's license or a head-to-toe Marc Jacobs wardrobe.

Sierra tosses her frizzed-out, corn-husk-blond spirals over her shoulder and straightens. "Well, maybe you saw someone else. Someone who looked like me. Isn't that possible?"

Actually, it isn't possible at all. Sierra has a totally warped sense of style, like Andy Warhol on crack. Everyday things lying around the house do not always make attractive accessories. I shrug, though, since I don't feel like explaining that hell would have a ski resort before two people on the face of this earth would think it was okay to tie their ponytail up in a Twizzler, and crane my neck toward the refreshment stand. I'm starving. Where are my French fries?

"I mean, I did get a twenty-three hundred on my SATs," she says, which is something she's told me, and the rest of the student body, about a billion times. She might as well have broadcast it on CNN. However, she hasn't taken into account the fact that there are thousands of other students across the country who also got those scores, and took college-level physics or calculus instead of Dramatic Expression as their senior extra_curricular activity. Everyone knows that Sierra Martin screwed herself by deciding to coast through her classes this year.

See, I'm not that spooky. Truth is, most people don't use enough of their brains to see the obvious. Part of it is just being keenly aware of human nature, like one of those British detectives on PBS. It's elementary, my dear Watson. Colonel Mustard in the Billiard Room with the candlestick, and Sierra is so not Harvard material.

"We need to do the wave," Eden says, grabbing my arm. She doesn't bother to look at me; her attention is focused totally on the game, as usual. "They need us."

I squint at her. "It's an exhibition game."

She pulls a half-sucked Blow Pop from her mouth with a smack and says, "So?"

She turns around to face the dozen or so students in the bleachers, cups her hands around her lips, and screams, "Okay, let's do the wave!" Auburn hair trailing like a comet's tail, she runs as fast as her skinny, freckled legs can carry her to the right edge of the seats, then flails her arms and says to the handful of people there, "You guys first. Ready? One, and two, and three, and go!"

I don't bother to turn around. I know nobody is doing it. It's human nature--doing a wave during an exhibition game is _totally lame. Actually, doing a wave at all is totally lame. And nobody is going to listen to poor Miss Didn't-Make-the-Cheerleading-Squad.

She scowls and screams, "Morgan!" as she rushes past me, so I feel compelled to half stand. I raise my hands a little and let out a "woo!" Sierra doesn't notice Eden's fit of school spirit, since she's still babbling on about her three years as editor of the yearbook, as if giving me her entire life story will somehow get her closer to the Ivy League.

Eden returns a few seconds later, defeated, and slumps beside me. The spray of freckles on her face has completely disappeared into the deep crevasse on the bridge of her nose. "This school has no spirit."