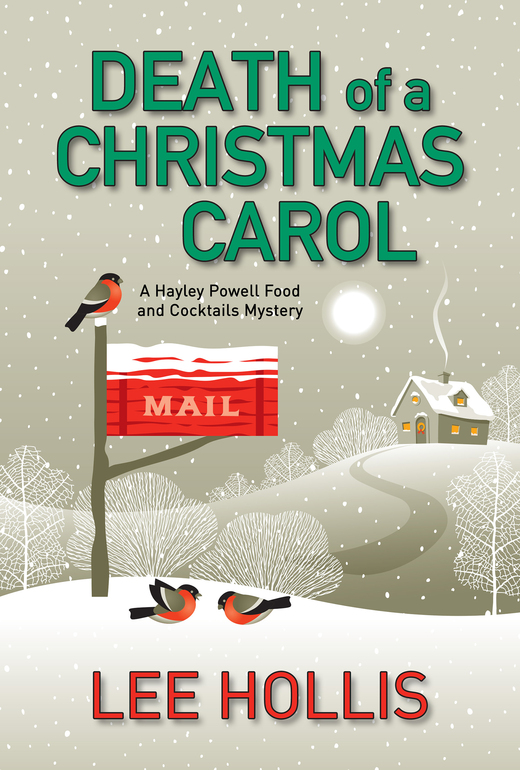 Season’s Greetings—murder is in the cards . . .

The Island Times Christmas soiree gets off to a scrooge-y start when Hayley Powell, Mona Barnes, and Rosana Moretti receive a Christmas card from the town flirt, Carol Waterman—who threatens to run off with one of their husbands . . . !

The ladies chalk it up to an imprudent prank . . . until they find Carol mistletoe-up under her tree . . .

And in dramatic fashion.

It all started on a blisteringly cold, gusty winter night in mid-December at the Island Times newspaper office on lower Main Street. The sky was already dark by four fifteen in the afternoon. The office holiday party was not scheduled to begin until six thirty, so Hayley still had time to get everything ready before the staff showed up to celebrate the end of another year of local news reporting.

It had become somewhat of a tradition for Hayley to take charge and plan the annual Christmas gathering. Luckily, she had some help this year. One of her besties, Mona, had generously donated enough lobster and crabmeat from her seafood business for some of the tasty appetizers Hayley had been tirelessly preparing for the last two days. These included a Spicy Tuna Dip, Blue Cheese–Stuffed Shrimp, and a Crab–Brie Cheese Ball. Hayley had sent Mona over to her house to pick up all the food she had prepared earlier. Mona was now setting them out on the serving table, but leaving them wrapped in tinfoil to keep the food warm until the guests arrived.

Meanwhile, Hayley was busy arranging her homemade Christmas cookies on a platter and keeping a watchful eye on Mona. She wanted to make sure Mona didn’t scarf down half of her holiday cheesecake before anyone else had the chance to try it, like she had done last year when she unexpectedly crashed the party.

At least this year, Mona had been officially invited. Editor in chief Sal Moretti’s one rule was that the holiday party was for employees of the paper only. However, everyone was welcome to bring one guest. Since Hayley and Bruce both worked at the Island Times, this year Hayley had made Mona her plus one. How could she not? Mona had given her hundreds of dollars of free seafood!

Her second helper assisting with party preparations, Sal’s wife of twenty-six years, Rosana Moretti, was at the moment standing on top of a small ladder, up on her tippy toes. Her arms were stretched as far as they could be as she tried pinning mistletoe on the top of the door frame leading to the back bull pen. She was a tiny thing, barely cracking five feet tall. She had a mop of grayish hair and thick black glasses that made her look like an aged version of the bookish Velma character from all those Scooby-Doo episodes and movies Hayley watched as a kid.

Hayley suddenly noticed the ladder teetering from side to side as Rosana, a piece of Scotch tape attached to her right index finger, her tongue protruding out of her mouth as she concentrated, tried in vain to tape the string tied to the piece of mistletoe to the door frame. She suddenly lost her balance and started to topple over.

“I got her!” Mona cried. She was much closer to the ladder and managed to dash over in time to catch Rosana in her thick arms. Mona effortlessly set the woman down as if she weighed no more than a rag doll.

“Rosana, I told you to let Mona do that!” Hayley scolded. “She’s taller than you.”

“I know, I just didn’t want to bother her,” Rosana said meekly. “I’m sorry to cause such a fuss.”

Hayley adored Rosana. Unlike her blustery, loudmouthed, hot-tempered husband, Sal’s wife was soft-spoken, sweet, never without a kind word, and was always concerned with keeping the peace.

The saying was true.

Mona gently pushed Rosana out of the way, climbed up the ladder, and, without breaking a sweat, easily taped the mistletoe so it hung down from the top of the door frame perfectly. When Mona stepped back down, she turned to Hayley and barked, “When can we have some cheesecake?”

“When the guests arrive, Mona, and not a moment before. Got it?” Hayley warned.

“That’s two hours from now. I’m never going to make it,” Mona groaned. “By the way, Dennis is coming. He’s Bruce’s plus one.”

This unexpected news blindsided Hayley—not that Bruce had invited Mona’s husband, Dennis, to be his guest, but that Dennis had actually agreed to get off the couch for once and appear in public. And at a Christmas party of all things! Dennis hated mingling and talking to people. He rarely talked to Mona. In fact, the only recent time Hayley had heard him speak was when she was over at their house earlier in the fall. Dennis was yelling at some Red Sox player on TV for striking out at the top of the ninth inning.

“I know, I know, I was as shocked as you. I don’t know what’s gotten into him lately. Suddenly he’s acting like he’s a real person in this world. Maybe he’s dying and just hasn’t gotten around to telling me yet,” Mona said.

“Trust me, Rosana, he’s not going anywhere. The man eats and drinks too much, never exercises, has a negative attitude most of the time, but he’s as healthy as a horse. I know God will kill me off first and let him live to be a hundred just to be funny!” Mona barked.

“It’s Christmas! Let’s talk about something more pleasant! Did you see the sweater I knitted for Sal? He wore it to the office today,” Rosana chirped.

“Oh, yes, the one with the gingerbread man on it that says, ‘Let’s Get Baked’?”

“Isn’t it adorable? I saw one like it on Pinterest, so I just had to make one for him myself.”

Mona raised an eyebrow. “ ‘Let’s Get Baked’? Do you know what that really means?”

She clearly did not know the real meaning of the phrase.

Before Mona had a chance to explain to the naive Rosana that her homemade sweater was promoting the use of marijuana, Hayley quickly interjected, “You’ve done a wonderful job decorating the office, Rosana.”

“Thank you, Hayley,” Rosana beamed, glancing around and inspecting her work: the hanging Christmas ball tapestry, the flower tree, the blinking colored lights strung a. . .