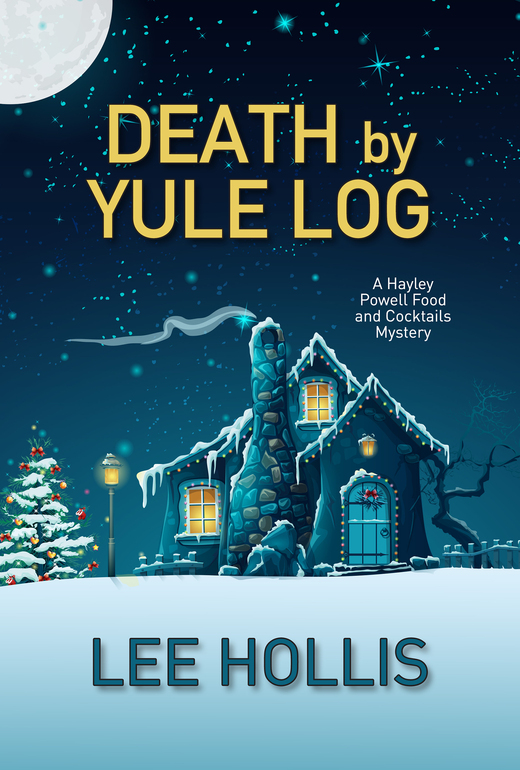 Hayley Powell’s holidays aren’t off to a very merry start. Not only has her daughter brought Conner—an infuriatingly perfect new beau—home to Bar Harbor, but a local troublemaker has been found dead with traces of her signature Yule log cake on his body. As Conner becomes the prime murder suspect, Hayley must put aside her mixed feelings to identify the real killjoy.

Hayley’s son would not be coming home for Christmas. “Mom, are you still here?”

“Anyway, it doesn’t look like I’ll be able to get out of here for at least five or six more days, which means . . .”

“It’s fine if you are,” he reassured her.

“I’m not crying,” Hayley insisted as a tear suddenly streamed down her right cheek. “It’s just . . . this will be the first Christmas that we haven’t spent together.”

“I know, but we can celebrate when I finally make it home.”

She heard someone talking in the background on the other end of the call.

“I’m on the phone with Mom,” Dustin said. “I told her I’m going to miss Christmas and she’s an emotional mess.”

“Let me talk to her,” Hayley heard her ex, Danny, say.

“Aw, you always were the sentimental type. Don’t worry. I’ll take good care of the kid and make sure he gets home in time for New Year’s.”

“Just don’t let him gorge on too much—”

“We have plenty of supplies. I stocked up on frozen pizza and I got a whole pantry full of potato chips and pretzels I picked up at Costco.”

“Don’t worry, I picked up a bag of veggie chips, too, for a little balance.”

“Ever hear of a produce section, Danny?”

“It’s the holidays, babe. No one is supposed to eat healthy.”

“And don’t let him play too many video games.”

Dustin grabbed back the phone. “Hey, Mom, guess what? Dad let me open one of my presents early! He got me Resident Evil 7: Biohazard! Can you believe it? We’ve been playing it all day!”

Before she could respond, Dustin handed the phone to Danny again.

“So, did Gemma arrive yet?” Danny asked.

“She called from the Bangor Airport when she landed. She was going to pick up her rental car and drive straight home. That was about an hour ago. She should be here any minute.”

“I hear she’s not coming alone.”

“From what I can gather, it appears to be. She hasn’t told me too much about him,” Hayley said, grimacing.

Ever since Gemma dropped out of vet school and moved to New York City to find herself, Hayley’s relationship with her daughter had been slightly strained. They still talked on the phone every other day, but their conversations were mostly confined to the subject of Gemma’s job, waiting tables at a Chelsea eatery, and how she had been dabbling more in cooking and was considering applying to a Manhattan culinary school. Gemma couldn’t decide if she wanted to be a chef at a restaurant or write a food column, like her mother did. Her ambitions far exceeded Hayley’s, however. Hayley was comfortable and happy just writing her daily column for the local Island Times newspaper in Bar Harbor, Maine. Gemma was eyeing her own column in Bon Appétit magazine or starring in her own Barefoot Contessa–style TV show on the Food Network, with a global Twitter following. But whenever Hayley broached the subject of her daughter’s personal life, Gemma made it clear that topic was strictly off-limits.

She did spill a few minor details on occasion about making new friends at her job and going out to nightclubs on the weekends with “a couple of girlfriends.” There was also her roommate, with whom she shared an apartment in Astoria, Queens. She was Greek and an insomniac, so she was usually up all night making her grandmother’s homemade hummus recipe and blasting the television, watching gooey romantic-comedy movies on Netflix.

But when it came to dating, Gemma had remained mum.

About a month ago, while discussing her weekend plans, she casually mentioned she had met someone at the restaurant where she worked. A guy who came in with some buddies for dinner. He had flirted shamelessly throughout the meal as she waited on them, and scribbled his number on the back of his credit card receipt after paying the bill. She was debating whether or not she should call him. Well, by their next conversation, she apparently had, because she told Hayley they had met on the previous Sunday afternoon. He had taken her to an East Village Film, Performance, and Art exhibit at the Museum of Modern Art, and then they had spent hours getting to know each other over espressos at a nearby coffeehouse. After that, Hayley was able to squeeze out a few more details, but unlike when she dated in high school, Gemma resisted the urge to gush freely about her new beau.

And Hayley found that incredibly frustrating.

And then there was that.

Hayley had nothing personal against actors. But she had read enough magazines and watched plenty of E! Entertainment Television to know dating an actor was the equivalent of walking through a minefield. Inflated egos, innate self-centeredness, unchecked vanity, any one of those could blow up at a moment’s notice. But Hayley hadn’t even met him yet, so she was working hard in her mind to give him the benefit of the doubt.

Hayley pictured him saying that with a straight face. “You’re always acting, Danny. You just don’t get paid for it.”

“The truth always does.”

Hayley saw a pair of headlights turning into the driveway.

Her stomach did a flip-flop.

She was suddenly nervous.

“Sure thing. And tell Dustin I love him and miss him and can’t wait for him to come home.”

“You’ve always been such a softie. Bye, babe.”

Hayley ended the call and placed her cell phone down on the kitchen counter. She quickly checked herself out in the mirror hanging in the hallway next to the staircase. Her eyes were bloodshot from crying, but there was little she could do about that now.

She took a deep breath.

Hayley heard footsteps on the front porch and then the door opened with a whoosh and Gemma burst in, her arms flung open for a hug.

Gemma looked radiant. Fresh-faced and glowing, her hair beautifully coiffed and styled, she was dressed to the nines in a stylish Kate Spade quilted winter coat.

Hayley held her tight for a moment, and then as she stepped back to get another look at her daughter, she felt as if she might start crying again.

“Wow, look at you! New York suits you,” Hayley said, her eyes brimming with tears.

When did she become so mushy and overly emotional?

She could only guess it had something to do with the empty-nest syndrome, now that both her kids were growing up and spending less and less time at home.

Gemma moved aside to reveal a strikingly good-looking young man, a few inches taller than Gemma, perfectly put together, wearing a very fashionable-looking black Burberry coat. He extended a hand and offered Hayley a warm smile.

His voice was deep and resonating.

“Please call me Hayley. And it’s great to finally meet you too, Conner.”

“Is this your first time in Maine?” Hayley asked.