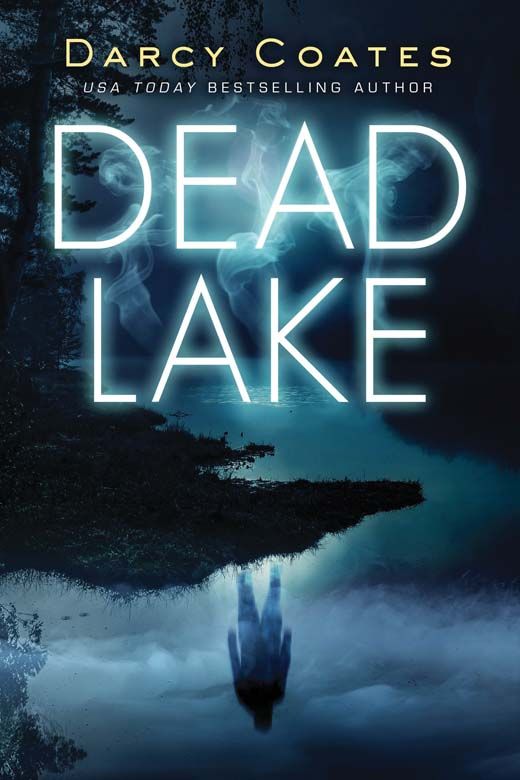 Sam is excited to spend a week at her uncle's remote lake cabin. It's a chance for her to focus on her art without distractions: no neighbours, no phone, and a small radio as her only contact with the outside world.

But there's something deeply unnatural lingering in the lake.

The radio's news reports talk about disappearances on a nearby hiking trail. The car won't start. And Sam starts to believe she's being stalked when she catches glimpses of a tall, strange man standing at the end of her dock, staring intently into the swirling waters below...

"A beautiful marriage of supernatural to a terrifying scenario... if you enjoy a suspenseful, frightening horror story, then Dead Lake is most definitely for you." -Twisted Book Junkie

Sam’s breath caught as she stepped back from the car, jacket in one hand and a luggage bag in the other, and turned to face the densely wooded hills behind her. The strangest sensation had crawled over her, as if she were being watched.

That was impossible, of course. The lakeside cabin was the furthest from civilisation Sam had ever been. Nestled deep in Harob Forest and situated at the edge of a large lake, her uncle’s property was a two-hour drive from the nearest town. Her Uncle Peter had said hiking paths snaked through the forest, but only a couple of them came near his part of the lake, and they weren’t used often.

Despite that, Sam couldn’t stop herself from running her eyes over the dense pine trees and shrubs that grew along the rocky incline. Only a colony of birds fluttering around a nearby conifer and the steady drone of insects broke the silence.

Sam turned back to the two-story cabin. The sun caught on the rough-hewn wood, making it almost seem to glow. It sat as close to the water as it could without compromising its foundations, and a balcony overlooked the lake. The rocky embankment rising behind it merged directly into the mountains, which grew more than a kilometre into the sky.

Peter had built the cabin nearly a decade before as a hobby to keep himself occupied on the weekends. He was proud of it, and rightfully so; Sam knew Peter made his living as a woodworker, but she hadn’t expected him to be so proficient at it. The cabin looked as natural as the rocks, as though it could have sprouted out of the ground fully formed.

Sam shifted the luggage bag to her left hand and approached the front door. Her key fit into the lock and turned easily, and a grin grew across her face as the door creaked open.

The cabin’s lower level was a single large room. A fireplace sat to her right; a stack of kindling waited for her near the soot-blackened hole, with a bracket holding aged firewood and an axe beside it. Two stuffed armchairs stood on thick animal furs, facing the fireplace. A polished wood table and chairs sat to Sam’s left, near the kitchenette that took up the back part of the room. A stairway above the kitchen led to the upper level.

Sam dropped her bag beside the open door and marvelled at how clean the room was. Peter said he visited it at least once a month, and he must have been scrupulous with its maintenance. Sam felt in her jacket pocket for the letter he’d given her then unfolded it to re-read the characteristically abrupt chicken-scratch scrawl.

Have fun at the cabin. Don’t get eaten by bears.

The lake’s good for swimming. There’s a canoe in the shed. And dry wood. Light a fire when the sun goes down—it gets cold at night.

There’s no electricity or phone reception, so don’t get into trouble, but if you do, there’s a two-way radio in the kitchen cupboard. I wrote the most important codes beside it.

Don’t go on the dock. (This line was underscored twice.) The wood’s rotten. I’ll fix it next time I’m up there.

There’s food in the cupboards. Eat it. You’re too skinny.

Smiling fondly, Sam tucked the note back into her pocket. The drive from the city had taken most of the day, and the sun was already edging towards the top of the mountains surrounding the lake. Sam hurried back to her car and began bringing in the rest of her luggage.

An easel, watercolours, oils and acrylics, a large wooden box full of mediums, charcoal and pencils, copious brushes, sketchbooks, and a dozen canvasses had filled the boot and both back seats of the car. Sam brought them inside with significantly more care than she’d shown her travel bag, which held only clothes and towels. She placed most of her equipment on the table then opened the easel in the empty space in the room’s corner.

Sam adjusted the angle of the easel so that it caught the natural light from the window, and set a canvas on it. It looked good there, she thought. Like an artist’s dream retreat. If this doesn’t get you back into your groove, nothing will.

The sky was darkening quickly, and Sam knelt in front of the fireplace. She found matches and clumsily lit the kindling in the grate. She hadn’t started a fire since her parents had taken her camping when she was a child. She used up most of the kindling before the blaze was strong enough to catch onto the larger pieces of wood.

Satisfied that her fire wasn’t about to die, Sam went to explore the second floor. The steep, narrow staircase turned at the corner of the room and led straight into a bedroom, which, like the ground floor, was open-plan. There was something resembling a bathroom at the back wall, with a sink, cupboard, mirror, toilet, and a bathtub—but no shower. The sink and bathtub had plugs, but no taps. On examination, Sam found a pipe coming out of the wall, with a drain and a bucket underneath it, set next to a hand pump. She guessed it was connected to a rainwater tank behind the cabin.

Of course. No electricity and no running water.

That meant she would have to heat the water over the fire if she wanted a warm bath. It wouldn’t have bothered Peter. He was a mountain man through and through; he loved hunting, fishing, and woodworking, and he probably relished icy cold showers, too.

A large double bed took up most of the room. It held several layers of thick quilts, topped with animal furs. Sam hesitated, felt the furs gingerly, then folded them up and placed them in the cupboard opposite the bed. Sleeping under the skins of dead animals seemed strangely macabre.

The door leading to the balcony stood to her left. Sam opened it and leaned on the sill to absorb the view. The sun had set behind the mountains, but most of the sky was still a pale blue, with tinges of red showing just above the tops of the trees on the west mountain. The glassy lake, which seemed to stretch on forever, reflected the patchy white clouds. Peter’s cabin was set at one of the lake’s widest points, but to her right, it narrowed and curved around the sides of the hills that cradled it.

The dock protruded from the shore below the cabin, running twenty meters into the lake. Something large and misshapen sat at its end; Sam squinted in the poor light, trying to make out what it was, then her heart faltered as the shape moved.

It was a man, on his knees, bent over the edge of the dock. His broad shoulders trembled as he stared, fixated on the water below.

Sam’s mouth had dried. She squeezed the balcony’s bannisters so tightly that her knuckles turned white. Her mind, shocked and panicky, struggled to pull information together. Who is he? Peter had said there weren’t any other houses within walking distance. Is he a hiker? Why’s he on our dock?

She was suddenly acutely aware of just how remote the cabin was. If she went missing, no one would know until she failed to return home a week later. The police would take hours to reach her, even if she could call them, which she couldn’t. Any defence would have to come from her own hands.

The man wasn’t moving, except for his shoulders, which twitched sporadically. Sam backed away from the balcony, barely daring to breathe, keeping her eyes fixed on the man until he disappeared from sight, then she turned and ran down the cabin’s stairs.

I need a weapon—something to intimidate him with or use in self-defence. Sam wrenched open the kitchen drawers, searching for a knife, but she came up with only two small blades that were useless for anything more than chopping carrots. She turned to look about the room, bouncing with anxious energy, and a glint of silver beside the fireplace caught her eye. The axe. Yes, that’ll do nicely.

Sam gripped its wooden handle and raised it to head height. She gave it an experimental swing and staggered as its weight threw her off-balance. Anxious sweat built over her back and palms as she turned towards the door and licked her lips.

He’s probably just a hiker who’s gone off the path to have a closer look at the lake.

He was trespassing, though, on what was clearly private property. Worse, he had to know someone was staying there—the car parked out front and the fireplace’s glow leaking through the windows were impossible to ignore.

The doorknob felt unusually cold under Sam’s fingers. She took a breath to brace herself then shoved the door open and staggered outside, her shaking hands squeezing the axe’s handle so tightly that they ached.

Be strong. Be intimidating. Show him that he doesn’t want to mess with you.

“Hey, punk, this is private property,” she yelled, hoping he wouldn’t hear the frightened squeak in her voice. No answer came. Sam squinted at the dock, which was becoming increasingly hard to see in the rapidly failing light. It was empty.