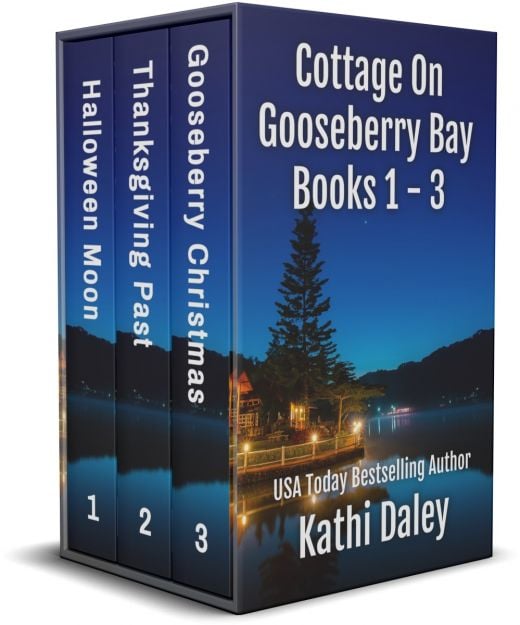 Kathi Daley Founding author
Follow
The Cottage at Gooseberry Bay is a series about, not only finding answers, but finding hope.
Genres: Animal Cozy MysteriesRomantic Suspense
Buy now
Available in:

USA Today Bestselling author Kathi Daley brings you a heartwarming mystery series about finding answers and fostering hope while building friendships and embracing the magic of life by the sea and small town holidays.Ainsley Holloway had come to Gooseberry Bay to find answers about her past. She’d come to find an explanation for the dreams that haunted her after the death of the cop who’d both rescued and raised her. And she’d come to identify the family she couldn’t remember but knew in her heart she’d once belonged to.Ainsley hoped that by finding these answers, she’d also find healing. She hoped that once she’d resurrected the memories buried deep in her mind, she’d find peace.The Cottage at Gooseberry Bay is a series about, not only finding answers, but finding hope.It’s a series about family and friendship.It’s a series about shared holidays, festivals, and celebrations.It’s a series about shared heartbreak and hardship.And it’s a series about the bond that can be forged amongst strangers when tragedy binds two or more individuals with a common goal.In book 1 in the series, Ainsley arrives in Gooseberry Bay only to find there will be no easy answers as she’d so naively hoped. Unwilling to leave before she gets what she came for, she rents a cottage on the sea where she and her dogs, Kai and Kallie, can settle in and wait. Her first night in town she meets a young woman who is later found dead. The local sheriff has labeled the death of this young woman a suicide based on a text message she’d sent before she died. But Ainsley, who’d spoken to the victim only hours before the text was sent, isn’t quite as sure of the easy answer the sheriff would like everyone to believe. An investigative journalist by trade and cops daughter by upbringing, Ainsley never had been the sort to walk away from unanswered questions, so with the help of new friends she meets along the way, she initiates a parallel investigation which seems to indicate the sheriff’s real motivation in trying to sell the suicide angle to the community is to protect the interests of a very rich and very powerful man.In book 2 in the series, Ainsley finally meets Adam Winchester who agrees to help her find the answers she is looking for. Meanwhile, Ainsley joins forces with Parker, Jemma, and Josie as they search for the truth about what might have happened to the family who vanished five Thanksgivings ago.In book 3 in the series, Ainsley decides to set aside her search for answers to her past and enjoy her first Gooseberry Christmas by volunteering along with the rest of the gang for the Christmas Festival on the boardwalk. Normally Ainsley didn’t bother much with Christmas and all its trappings but this year she is excited to join in as most of the locals are prone to do. Of course it does put a bit of a damper on the festivities when a body is found in the tree lot where the gang had offered to help out, but that doesn’t stop Ainsley from making the most of the season in spite of the crazy investigation she can’t help but get pulled into.