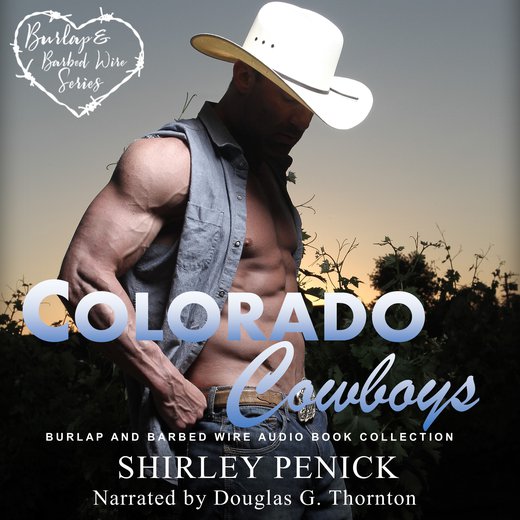 The entire Burlap and Barbed Wire Series in one set.

The six Kipling siblings find laughter and love in the Colorado mountains. Shenanigans and steam abound on the Rockin’ K ranch.

A Cowboy for Alyssa Looks can be deceiving, and a cowboy only gets one chance to make a good impression. Beau Kipling sees the sweet young thing coming for her riding lesson and feels a kick to his gut. What is this hot young woman doing dating a man old enough to be her father?

Taming Adam The heart wants what the heart wants, even when the head says Noooo! Rachel Reardon has to question her own sanity when she’s enthralled with a man she can hardly stand to speak to.

Tempting Chase Friends forever. Katie Jackson has known Chase Kipling since first grade, she’s had a crush on him since middle school, and loved him since, well, probably forever. But he’s got her firmly in the friend zone and she has no idea how to change that. Or if she even wants to risk changing it. After all friends is better than nothing. Isn’t it?

Roping Cade A fake relationship is the plan. Cade Kipling can’t believe the beautiful woman that emerges from the cocoon of overalls and oversized glasses. Two weeks of dating will either kill them or change their lives forever.

Trusting Drew A death-bed promise turns lethal. Drew Kipling rides to the rescue of the pretty woman who needs to get warm and have her injuries taken care of. When she can't remember her name, he vows to protect her, until she knows who she can trust.

Emma’s Rodeo Cowboy He’s never even kissed the woman, but her son is clearly, without a doubt, his. Emma Kipling took matters into her own hands six years ago, before the man she was crazy about took off to join the rodeo. Now he’s back for her brother’s wedding, and by the look on his face, sparks are going to fly.