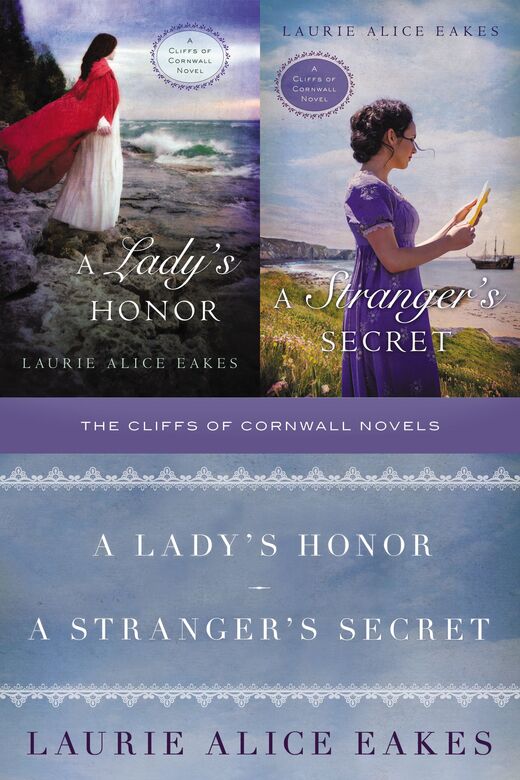 The Cliffs of Cornwall Novels

Two novels from Laurie Alice Eakes are now available in one collection!

On the cliffs of 19th-century Cornwall, a spirited, impetuous young woman is torn between the honor of her family and the longing of her heart.

When Elizabeth Trelawny flees London, she has more than one reason to run. And when her carriage, pursued by her would-be fiancé, is caught in a storm, she quickly accepts the help of a dark stranger. Anything to get back to Cornwall.

But Rowan Curnow is not exactly a stranger. He’s not quite a gentleman either. Class disparity once kept him from courting Elizabeth . . . even if it didn’t keep him from kissing her.

Together they elude their pursuers and reach Bastion Point, Elizabeth’s future inheritance and the one place she calls home. But in the very act of spiriting her to safety, Rowan has jeopardized Elizabeth’s inheritance—if her grandfather ever learns she spent the night, however innocently, in the company of a man.

When smugglers unite the pair in a reckless, flirtatious alliance—an alliance that both challenges the social norms Elizabeth has been raised to revere and rattles Rowan’s fledgling faith in God—Elizabeth must choose between the obedience of a child and the desires of a woman: cling to the safety of her home or follow the man she loves.

As a grieving young widow, Morwenna only wants a quiet life for herself and her son. Until a man washes ashore, entangling her in a web of mystery that could threaten all she holds dear.

Lady Morwenna Trelawny Penvenan indulged in her fair share of dalliances in her youth, but now that she's the widowed mother to the heir of the Penvenan title, she's desperate to polish her reputation. When she's accused of deliberately luring ships to crash on the rocks to steal the cargo, Morwenna begins an investigation to uncover the real culprits and stumbles across an unconscious man lying in the sea's foam—a man wearing a medallion with the Trelawny crest around his neck.

The medallion is a mystery to David Chastain, a boat builder from Somerset. All David knows is that his father was found dead in Cornwall with the medallion in his possession after lying and stealing his family's money. And he knows the widow who rescued him is impossibly beautiful—and likely the siren who caused the shipwreck in the first place—as well as the hand behind whoever is trying to murder David.

As Morwenna nurses David back to health and tries to learn how he landed on her beach, suspicion and pride keep their growing attraction at bay. But can they join together to save Morwenna's name and estate and David’s life? Can they acknowledge the love they are both trying to deny?