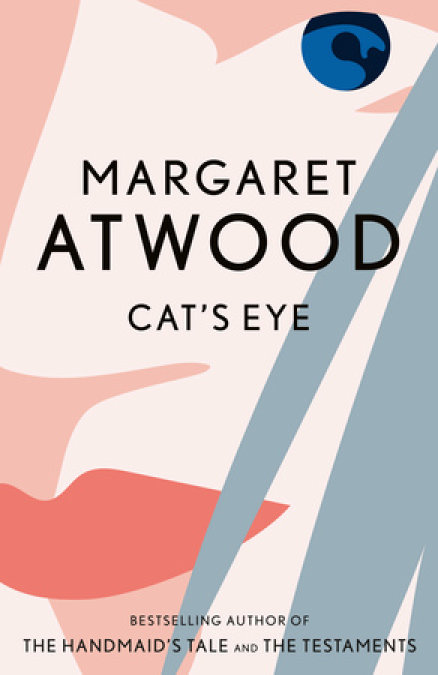 From the Booker Prize-winning author of The Blind Assassin comes a breathtaking novel about a woman grappling with the tangled knot of her life. Disturbing, hilarious, and compassionate, Cat's Eye is the story of Elaine Risley, a controversial painter who returns to Toronto, the city of her youth, for a retrospective of her art. Engulfed by vivid images of the past, she reminisces about a trio of girls who initiated her into the fierce politics of childhood and its secret world of friendship, longing, and betrayal. Elaine must come to terms with her own identity as a daughter, a lover, an artist, and a woman-but above all she must seek release from her haunting memories. 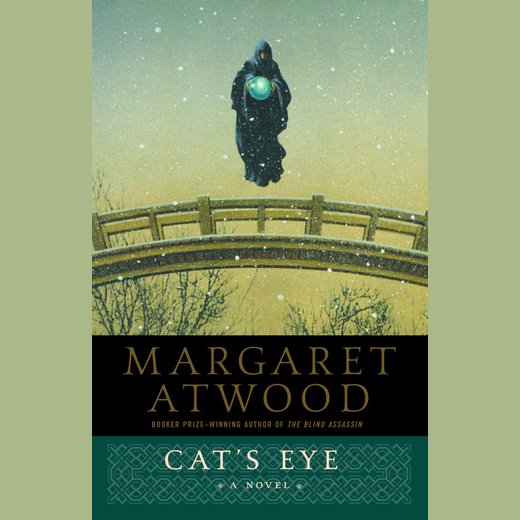 Time is not a line but a dimension, like the dimensions of space. If you can bend space you can bend time also, and if you knew enough and could move faster than light you could travel backward in time and exist in two places at once.

It was my brother Stephen who told me that, when he wore his raveling maroon sweater to study in and spent a lot of time standing on his head so that the blood would run down into his brain and nourish it. I didn’t understand what he meant, but maybe he didn’t explain it very well. He was already moving away from the imprecision of words.

But I began then to think of time as having a shape, something you could see, like a series of liquid transparencies, one laid on top of another. You don’t look back along time but down through it, like water. Sometimes this comes to the surface, sometimes that, sometimes nothing. Nothing goes away.

“Stephen says time is not a line,” I say. Cordelia rolls her eyes, as I knew she would.

“So?” she says. This answer pleases both of us. It puts the nature of time in its place, and also Stephen, who calls us “the teenagers,” as if he himself is not one. Cordelia and I are riding on the streetcar, going downtown, as we do on winter Saturdays. The streetcar is muggy with twice-breathed air and the smell of wool. Cordelia sits with nonchalance, nudging me with her elbow now and then, staring blankly at the other people with her gray-green eyes, opaque and glinting as metal. She can outstare anyone, and I am almost as good. We’re impervious, we scintillate, we are thirteen.

We wear long wool coats with tie belts, the collars turned up to look like those of movie stars, and rubber boots with the tops folded down and men’s work socks inside. In our pockets are stuffed the kerchiefs our mothers make us wear but that we take off as soon as we’re out of their sight. We scorn head coverings. Our mouths are tough, crayon-red, shiny as nails. We think we are friends.

On the streetcars there are always old ladies, or we think of them as old. They’re of various kinds. Some are respectably dressed, in tailored Harris tweed coats and matching gloves and tidy no-nonsense hats with small brisk feathers jauntily at one side. Others are poorer and foreign-looking and have dark shawls wound over their heads and around their shoulders. Others are bulgy, dumpy, with clamped self-righteous mouths, their arms festooned with shopping bags; these we associate with sales, with bargain basements. Cordelia can tell cheap cloth at a glance. “Gabardine,” she says. “Ticky-tack.”

Then there are the ones who have not resigned themselves, who still try for an effect of glamour. There aren’t many of these, but they stand out. They wear scarlet outfits or purple ones, and dangly earrings, and hats that look like stage props. Their slips show at the bottoms of their skirts, slips of unusual, suggestive colors. Anything other than white is suggestive. They have hair dyed straw-blond or baby-blue, or, even more startling against their papery skins, a lusterless old-fur-coat black. Their lipstick mouths are too big around their mouths, their rouge blotchy, their eyes drawn screw-jiggy around their real eyes. These are the ones most likely to talk to themselves. There’s one who says “mutton, mutton,” over and over again like a song, another who pokes at our legs with her umbrella and says “bare naked.”

This is the kind we like best. They have a certain gaiety to them, a power of invention, they don’t care what people think. They have escaped, though what it is they’ve escaped from isn’t clear to us. We think that their bizarre costumes, their verbal tics, are chosen, and that when the time comes we also will be free to choose.

“I’m going to have a pet iguana,” I say, “and wear nothing but cerise.” It’s a word I have recently learned.

Now I think, what if they just couldn’t see what they looked like? Maybe it was as simple as that: eye problems. I’m having that trouble myself now: too close to the mirror and I’m a blur, too far back and I can’t see the details. Who knows what faces I’m making, what kind of modern art I’m drawing onto myself? Even when I’ve got the distance adjusted, I vary. I am transitional; some days I look like a worn-out thirty-five, others like a sprightly fifty. So much depends on the light, and the way you squint.

I eat in pink restaurants, which are better for the skin. Yellow ones turn you yellow. I actually spend time thinking about this. Vanity is becoming a nuisance; I can see why women give it up, eventually. But I’m not ready for that yet.

Lately I’ve caught myself humming out loud, or walking along the street with my mouth slightly open, drooling a little. Only a little; but it may be the thin edge of the wedge, the crack in the wall that will open, later, onto what? What vistas of shining eccentricity, or madness?

There is no one I would ever tell this to, except Cordelia. But which Cordelia? The one I have conjured up, the one with the rolltop boots and the turned-up collar, or the one before, or the one after? There is never only one, of anyone.

If I were to meet Cordelia again, what would I tell her about myself? The truth, or whatever would make me look good?

Probably the latter. I still have that need.

I haven’t seen her for a long time. I wasn’t expecting to see her. But now that I’m back here I can hardly walk down a street without a glimpse of her, turning a comer, entering a door. It goes without saying that these fragments of her-a shoulder, beige, camel’s-hair, the side of a face, the back of a leg-belong to women who, seen whole, are not Cordelia.

I have no idea what she would look like now. Is she fat, have her breasts sagged, does she have little gray hairs at the comers of her mouth? Unlikely: she would pull them out. Does she wear glasses with fashionable frames, has she had her lids lifted, does she streak or tint? All of these things are possible: we’ve both reached that borderline age, that buffer zone in which it can still be believed such tricks will work if you avoid bright sunlight.

I think of Cordelia examining the growing pouches under her eyes, the skin, up close, loosened and crinkled like elbows. She sighs, pats in cream, which is the right kind. Cordelia would know the right kind. She takes stock of her hands, which are shrinking a little, warping a little, as mine are. Gnarling has set in, the withering of the mouth; the outlines of dewlaps are beginning to be visible, down toward the chin, in the dark glass of subway windows. Nobody else notices these things yet, unless they look closely; but Cordelia and I are in the habit of looking closely.

She drops the bath towel, which is green, a muted sea-green to match her eyes, looks over her shoulder, sees in the mirror the dog’s-neck folds of skin above the waist, the buttocks drooping like wattles, and, turning, the dried fern of hair. I think of her in a sweatsuit, sea-green as well, working out in some gym or other, sweating like a pig. I know what she would say about this, about all of this. How we giggled, with repugnance and delight, when we found the wax her older sisters used on their legs, congealed in a little pot, stuck full-of bristles. The grotesqueries of the body were always of interest to her.

I think of encountering her without warning. Perhaps in a worn coat and a knitted hat like a tea cosy, sitting on a curb, with two plastic bags filled with her only possessions, muttering to herself. Cordelia! Don’t you recognize me? I say. And she does, but pretends not to. She gets up and shambles away on swollen-feet, old socks poking through the holes in her rubber boots, glancing back over her shoulder.

There’s some satisfaction in that, more in worse things. I watch from a window, or a balcony so I can see better, as some man chases Cordelia along the sidewalk below me, catches up with her, punches her in the ribs—I can’t handle the face—throws her down. But I can’t go any farther.

Better to switch to an oxygen tent. Cordelia is unconscious. I have been summoned, too late, to her hospital bedside. There are flowers, sickly smelling, wilting in a vase, tubes going into her arms and nose, the sound of terminal breathing. I hold her hand. Her face is puffy, white, like an unbaked biscuit, with yellowish circles under the closed eyes. Her eyelids don’t flicker but there’s a faint twitching of her fingers, or do I imagine it? I sit there wondering whether to pull the tubes out of her arms, the plug out of the wall. No brain activity, the doctors say. Am I crying? And who would have summoned me?

Even better: an iron lung. I’ve never seen an iron lung, but the newspapers had pictures of children in iron lungs, back when people still got polio. These pictures-the iron lung a cylinder, a gigantic sausageroll of metal, with a head sticking out one end of it, always a girl’s head, the hair flowing across the pillow, the eyes large, nocturnal-fascinated me, more than stories about children who went out on thin ice and fell through and were drowned, or children who played on the railroad tracks and had their arms and legs cut off by trains. You could get polio without knowing how or where, end up in an iron lung without knowing why. Something you breathed in or ate, or picked up from the dirty money other people had touched. You never knew.

The iron lungs were used to frighten us, and as reasons why we couldn’t do things we wanted to. No public swimming pools, no crowds in summer. Do you want to spend the rest of your life in an iron lung? they would say. A stupid question; though for me such a life, with its inertia and pity, had its secret attractions.

Cordelia in an iron lung, then, being breathed, as an aceordian is played. A mechanical wheezing sound comes from around her. She is fully conscious, but unable to move or speak. I come into the room, moving, speaking. Our eyes meet.