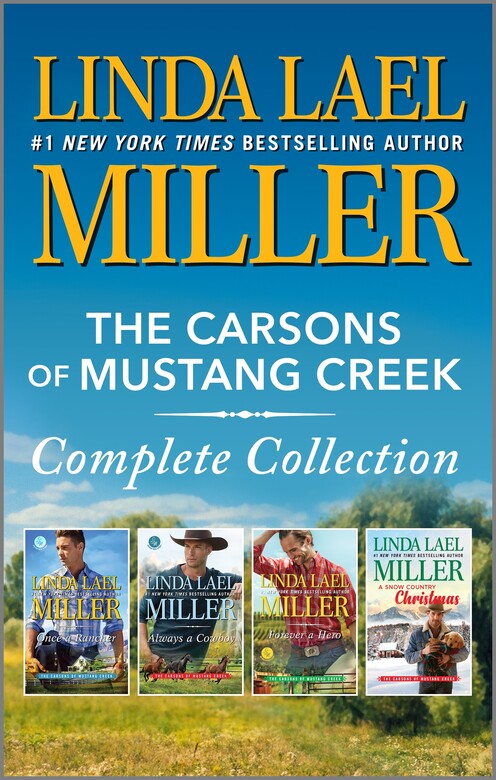 Meet the Carsons of Mustang Creek: three men who embody the West find love in these four fan-favorite stories—collected here in one volume for the first time—from New York Times bestselling author Linda Lael Miller, queen of the Western romance!

Slater Carson might be a filmmaker by trade, but he’s still a cowboy at heart—and he knows the value of a hard day’s work under the hot Wyoming sun. So when he sees troubled teen Ryder heading down a dangerous path, he offers the boy a job on the ranch he shares with his two younger brothers. And since Ryder’s guardian is the gorgeous new Mustang Creek resort manager, Grace Emery, Slater figures it can’t hurt to keep a closer eye on her, as well… But Grace Emery doesn’t have time for romance. When an unexpected threat emerges, she’ll discover just how far Slater will go to protect what matters most—and that love is always worth fighting for.

Drake Carson is the quintessential cowboy. In charge of the family ranch, he knows the realities of this life, its pleasures and heartbreaks. Lately, managing the wild stallions on his property is wearing him down. When an interfering so-called expert arrives, Luce Hale, and starts offering her opinion, Drake is wary, but he can’t deny the longing—and the challenge—she stirs in him. Luce and Drake are at odds from the very beginning, especially when it comes to the rogue stallion who’s stealing the ranch mares. But when Drake believes Luce is in danger, that changes everything—for both of them.

Mace Carson doesn’t consider himself a hero. Back in college, he came upon a woman in trouble and intervened—but he was just one irate Wyoming cowboy with his boots planted firmly on the side of right. Now a successful vintner, Mace is shocked to be reunited with the woman he saved. But it turns out she’s in Wyoming on business…a corporate executive representing the company that wants to buy his winery. Only he’s not selling. Reluctant to mix business with pleasure, Kelly vows to keep things professional, until her attacker is released from prison and comes for vengeance…against both of them.

Raine McCall would take snow-covered mountains over a star-studded premiere any day. But when hotshot movie executive Mick Branson arranges dinner on Christmas Eve to discuss a work opportunity, she’s intrigued—by the offer and the man. She’s a no-makeup, no-frills single mom who’s happy with her quiet life. Sharing chili cheeseburgers and sizzling kisses with Mick is sure heating up her holiday, but country girl and power player don’t mix. Their attraction is undeniable—and so are their differences. For Mick, putting down roots in the Wild West wasn’t in the script. But there are some Christmas gifts you can’t walk away from, even when they turn your whole world upside down…