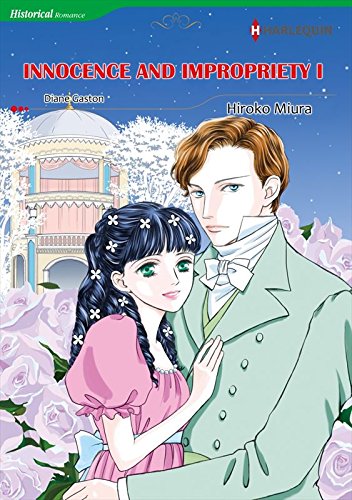 [Innocence And Impropriety 1]
London, 1817. The Marquess of Tannerton has whatever he needs, but what he truly desires is the company of Rose O'Keefe, the Irish singer who's been captivating hearts at Vauxhall Gardens. While Tannerton's secretary, Flynn, may be proper enough to keep his own interest in the lady from disrupting his employment, the foreboding Lord Greythorne appears to take whatever—and whomever—he wants, whether by money or force. All Rose wishes to do is sing for Flynn, but she may end up using her beautiful voice to cry for his help.

[Innocence And Impropriety 2]
It's the dawn of the 19th century and a masked man is attacking women of the night in London. Just as this fiend hides his secret identity, Irish singer Rose O'Keefe must conceal her feelings for the Marquess of Tannerton's secretary, Jameson Flynn. While Flynn may wish to be with his siren, the Marquess has already set his eyes on having her, if only to prevent her from falling into the clutches of the despicable Earl of Greythorne. Never mind the love triangle; can Rose manage to survive the harsh streets of London, or will she soon be singing her swan song?

[The Bonny Bride]
Dying after a life of suffering, Jenny's mother's last words to her were to never marry a poor man. Jenny, a maid in Scotland, grew up with this lessonWhen she hears that a man who found success in the New World is looking for a bride, she boards a ship crossing the Atlantic. However, when the ship encounters a storm and she falls into the sea, Harris, a rumored misogynist, dives into the ocean and rescues her.When she awakes, she is in the New World. And he, the man who glared at her with scorn when she saw him in town, saved her? While traveling together to meet her husband-to-be, Jenny feels herself drawn to Harris despite his reputation and despite her best intentions.