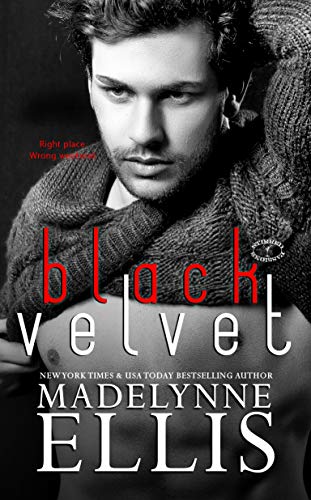 "Heartbreaking, heart wrenching and yet heartwarming too. This story will grab you and literally gut you with rampaging emotions but by the last page you sigh and smile and be glad you tagged along on this journey!"

My best friend just hooked up with the girl of his dreams. To say I'm devastated is an understatement. But it's nothing a nice rebound relationship can't fix. Go out. Get drunk. Get laid. Wake up fixed. At least that's the story I spin myself. And how I wind up seducing my straight—questioning—soon to be new co-star. It’s all going swimmingly, until she shows up. His very wet dream. In the bath-tub of our country cottage. And then we get snowed in.

★ ★ ★ ★ ★ “Heartbreaking, heart wrenching and yet heartwarming too. This story will grab you and literally gut you with rampaging emotions but by the last page you sigh and smile and be glad you tagged along on this journey!” Goodreads reviewer.

Black Velvet is a steamy emotional romance featuring a heart-broken hero, a videogame geek, and an unexpected guest. It includes M/F, M/M, & M/M/F encounters. Dive in and discover why readers say no one writes bisexual bad boys like Madelynne Ellis.

Please note: this title was originally published as Bath Bomb by Clara Leigh. This is an expanded version of the original story and contains approximately 7000 words of additional material.

Why would you do that to a perfectly good pint?”

“Because we’re celebrating, and you have to do that with champagne.”

“Only if you’re a Woodrow,” I remark, while staring at the Guinness I had all lined up to sip. It’s now sporting effervescent bubbles. Champagne was never a feature of my life before I got unofficially adopted by Dare’s Hollywood dynasty family. “In any case,” I inform him. “What you’ve given me is a mourning drink. This delightful concoction was first created to mark the death of Prince Albert.”

Which from my point of view is wholly appropriate. This is a wake.

Oh, not for them. Dare and Flicka are here celebrating the release of their movie Accelerant, and their absolute bliss at  having found one another. It’s only me who realises that tonight marks the end of an era. Going forward, we’re Dare and Lorne, bachelors about town no more. Instead, the gossip rags will be full of tales of Dare and Felicity. There’ll be no more reports of bad boy antics. No more partying until dawn. No more flat share, or bro-jobs, and an absolute end to believing that such an intense friendship will  magically transform into something more.

This is the end of the line.

He has an engagement ring burning a hole in his pocket. I’ve seen it. He showed me the stones. Demanded my approval and assistance in choosing it.

That’s for later, though. There’s a cord we need to cut first. A declaration he has to make in order to prove himself.

“I need to prove it absolutely to her. There can’t be any lingering doubt in her mind about us,” he said not five minutes ago as we crawled along in the limo waiting to be dropped off. Flicka as the leading lady had her own car.

God help me, he knew I wouldn’t say no. Hence, now I can hardly look at him. Not because I hate him. I don’t. Never will. But because this is goodbye, and I’m not ready for it to end.

“Is that true, the bit about Prince Albert?” Flicka asks. “I’ve never associated him with Guinness. It’s Irish, isn’t it, and he was German.”

I nod. It’s easier than speaking. I know my cocktail history. Matter of fact, I take pride in the fact that I know how to mix them. It’s a talent I put right up there with my other significant gifts, like looking shit hot on camera while practically naked, being able to roll a condom on without the use of my hands, and making the best hangover cures known to man.

“Dare—maybe we should get him another drink. I don’t want to jinx the release.”

I flash Flicka a toothy grin and let the black liquid flow down my throat. “Nah, it’s good. It’s just a beverage, Flicka. Movie success doesn’t ride on what you swallow.” Nor your future relationships. Sadly.

And actually, after another couple of deep draughts, it turns out that Black Velvet isn’t half bad. So, it’s kind of two-tone—like my mood—black and white, a surprising mix of froth and solidity. And best of all, I suspect, blessedly lethal.

I’m going to need at least six of them to get through the rest of tonight given what Dare’s asked of me.

Only he doesn’t know that it is, because he never did have the faintest bloody clue. So, I can’t hate him for it.

After a decade of his obliviousness, I can hardly expect sudden enlightenment, can I? And if it stings, well, that’s my fault too, because I ought to have spelled it out for him long before we ever reached this point.

Fab job of being obtuse, Lorne. You’re known for being blisteringly to the point, yet over the one thing that’s truly mattered, you’ve been wholly silent.

No wonder he never figured it out.

Dare somehow manages to catch my eye, which necessitates me diving headlong into my pint again.

I’m pretty certain that Black Velvet is usually served in champagne flutes. Yeah, whatever. I’m going to sleep like the dead tonight, totally oblivious to their amorous gymnastics. I’ve been eviscerated by those sounds one too many times in recent history already.

“To Accelerant,” I say. “May it be a roaring success.”

“And emancipation,” she adds, shooting her deadly smile back in Dare’s direction. She’s been fighting a courtroom battle with her former employers for the last eight months.

We all clink glasses.

It’s not hard to figure out how my best mate wound up so thoroughly hooked. Flicka Caine is a damned enticing mix of sweet and sultry. She’s beautiful in an ethereal blonde sort of way, and talented too.

Absolutely perfect for him in every way.

She even likes the Borrower.

Dammit, I like her. I like her a lot. She’s nearly impossible not to like. Hell, I even love that Dare loves her and has found his happiness. It just kills me that I lost out in the process of getting him what he so desperately deserved.

Yes, I was their bona fide matchmaker.

Without me, they’d never have sealed the deal.

Eat your heart out Yente—love that musical—harken to the cries of the new matchmaker in town.

As for Dare and Flicka, well, they’d better bloody well name their firstborn after me.