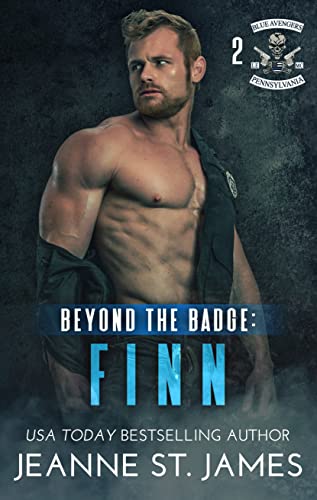 Beyond the Badge: Finn

When an undercover assignment ends up literally under the covers…

As part of the Tri-State Federal Task Force, Daniel Finnegan, road captain for the Blue Avengers MC, is investigating the Deadly Demons, an MC trafficking drugs into Pennsylvania. When he reluctantly goes undercover as a dancer with an all-male revue at a club recently purchased by the outlaw bikers, he comes face to face with Melina Jensen.

As manager of The Peach Pit, Mel could be an important asset for the drug task force with her unfettered access behind the scenes. Unhappy with the way the Demons are destroying the business, it doesn’t take much for Finn to convince Mel to work with him as a confidential informant. Even though becoming a CI for the task force isn’t without risk, Mel’s willing to help in any way she can.

To give Finn better access to The Peach Pit and the illegal dealings without raising any red flags with the MC, they start to “date.” Only, what starts out as a fake relationship ends up being anything but. Until eventually, neither can no longer dance around the truth.

However, once Mel’s safety is threatened, it’s up to Finn to find a way to protect her without blowing the entire investigation.

Note: Beyond the Badge: Finn is the second book in the Blue Avengers MC series. It’s HIGHLY recommended to read this six-book action/adventure series in order due to the continuing story arcs (subplots). However, each book focuses on a different couple who gets their HEA. This series has no cheating or relationship cliffhangers.