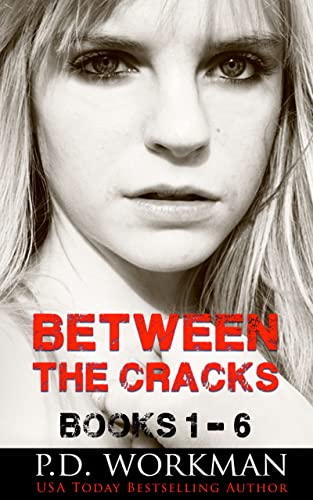 Follow the lives of the Simpson family, their lives torn apart by abuse and neglect. Get the full series!

Ruby, Between the Cracks

Ruby, Between the Cracks, was awarded a place in the Top Ten Books for Teens 2015.

Winner of Top Ten Books for Teens award by In the Margins Committee, 2015.

If you asked Ruby, she’d tell you she’s happy with her life. She’s tough and independent and doesn’t depend on anyone else. But things aren’t as rosy as she would have everyone believe, and the road ahead of her is filled not only with gangs, drugs, and depression, but other challenges that Ruby hasn’t even imagined.

Justin already failed June once. He wasn’t there when she needed him, and because of him, their lives will never be the same. Justin must protect June at all costs. But it seems they are always falling behind, barely keeping one step ahead of the nightmares.

When Michelle asked to be taken away from her abusive mother, she never expected to lose everyone she loved in the process. They said they would keep her and Kenny together. Her daddy said he would be back, but he wasn’t. All too soon, they are forced to reunite her with their mother, and Michelle is forced to take to the streets, seeking safety in the gang life.

Chloe had known for a long time that she was two people. The Chloe who watched and the Chloe who experienced. She had been watching for so long, she wasn’t sure she could feel anything anymore. But if she can’t overcome her past and start living in the real world, she knows she will lose herself forever.

Ronnie was the one child in the Simpson family to escape from the abuse and grow up in a normal home without being bounced from place to place or ending up on the street.

June Into the Light

Getting clean is just the first of June’s challenges, and as difficult as it is, may be the easiest part.

The path ahead is filled with so many obstacles she can’t see her way through to the other side. Facing her children and convincing them that she has really changed and is capable of a healthy relationship with them seems like an insurmountable task.