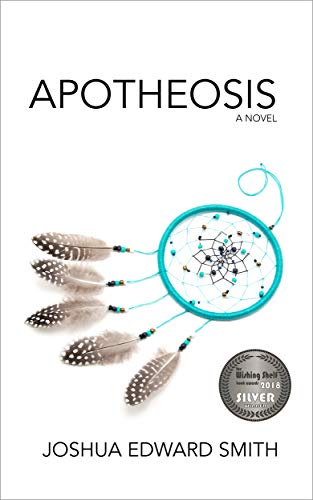 After a fleeting encounter with a state of bliss she's never before known, Cynthia is driven to recapture that moment. She sets off on a mission to find the man of her dreams, but instead discovers the frightening truth of what he really is. Life and death hang in the balance, with her own redemption being her only hope of survival. This contemporary take on the hero's journey is as moving as it is mesmerizing.

She couldn’t take her eyes off his face. He was telling a story about the time he traveled to Tibet. She thought she should be paying more attention to his words, but that face. That neck. That jaw line. His voice was soothing, like music. It didn’t matter what he was saying—just keep talking and I’ll be happy. There was a small hint of an accent. Someplace in the western part of the country. Texas maybe.

She had never traveled anywhere as exotic as Tibet. She should. She had money and no obligations other than work. She could travel. Maybe they could travel together. Her ex never wanted to travel. He worked hard and played harder and didn’t see any need to go anywhere else. But she was free of him now. She could travel if she wanted to.

Cynthia nodded and smiled. Anything to keep him talking, so she could luxuriate in the music of that voice. She glanced down at her body, naked under a single sheet. And over at his. She never slept naked. Always in a nightgown. It was a little outside her comfort zone to be naked while sleeping. But of course, they weren’t sleeping. They were talking. She pinched the sheet between her toes and tugged it down a little exposing her breasts. Lying sideways like this, her chest looked like that of a much younger woman.

She glanced up at him and noticed he was now staring at her erect nipples. She scanned down and was reasonably sure she could see a change in the profile of the sheet in front of his hips. How did I get here? What did I do to deserve this luck?Cynthia hadn’t been this content in… maybe ever? She thought back to the early days of her marriage. It was a heady stew of excitement and lust. Randy kept her on edge, and the tension was high. It was a good time, but it was totally different than this.

Her marriage had fallen apart so slowly she hardly noticed it happening. They talked less and less. He drank more and more. The sex ended and she didn’t even miss it. And then suddenly he was gone. Getting another girl pregnant will do that, she supposed. Ah, pregnancy. Her white whale. By the time they noticed they couldn’t seem to get pregnant, neither of them cared. She now figured it was something wrong with her own plumbing, since he didn’t have any trouble knocking that young thing up. She didn’t care whether she was capable of having children. She never had that desire to be a mother. Cynthia never had the desire to be much of anything. Right now she desired to slide on top of this delicious man.

Her gambit with the sheet hadn’t worked, though. He was six layers deep in his tale and he wasn’t about to be ripped away from it. That was fine. Just keep talking. She felt so much love. It filled her up. She smiled at him as she watched the little expressions on his face. The hint of a smirk when he talked about the local girl he met, hinting at a whole subplot he was skipping because she wasn’t the right audience for it. The eye roll when he talked about the other Americans he ran into, leaving him wishing he had told everyone he was Canadian, instead.

She looked down at his hands. They were strong and weathered. One was on the bed with his fingers spread like he was going to play the knife game. She eased her hand over and tapped her index finger next to his thumb. Position one. Then between his thumb and index finger. Position two. Back to one. She started tapping her finger onto the bed, faster and faster. Her finger was the knife. She became aware that he had stopped talking, but she had to finish the game. Several taps later she looked up at him sheepishly.

He had a huge smile on his face. “You nicked my pinky a little. I might bleed out.”

Cynthia laughed. “I’m sorry. I have no idea what came over me.”

“I love that side of you,” he said. “The silly girl who suddenly decides to play the knife game with my fingers.”

“Is that right?” she asked, sitting up a little, her breasts falling completely clear of the sheet. “Is that the side you like?”

He raised his eyebrows and looked at her display. “Yes. Now, as I was saying…”

And she lost him into the story again. She ran her fingertips along his pinky finger where she had mortally wounded him a moment ago. She leaned down and kissed it gently. Then she ran her fingers along the back of his hand and up his arm. She listened to his story as she made a path among the grasslands of his forearm. Exploring every freckle, every hair. She had never known such happiness.

She heard the sound of wind chimes. They blended nicely with his voice, but he stopped talking when he heard them. “What is that sound?” he asked.

She listened a moment. “Oh. Shit. That’s my phone alarm. Have we been talking all night? I’m going to be a zombie at work tomorrow. Well today, I guess. Ugh. Hang on.” She rolled away from him and silenced the 5:30 alarm on her phone.

She rolled back and he was gone. She scanned the dark room. Where the fuck did he go? She looked down and noticed she was no longer naked. She was wearing a nightgown. Like every morning. She looked back at his side of the bed. It hadn’t been slept in.

Cynthia was rattled. She sat up and tried to get her bearings. What the fuck? Logic told her that she had been dreaming. That he wasn’t real. But her heart, her gut, and her loins told her something else. He was there. He is real. She swung her legs off the bed and went to shower. She could still hear his voice echoing in her head. Still see his face. She had just met her soul mate. She was sure of it.