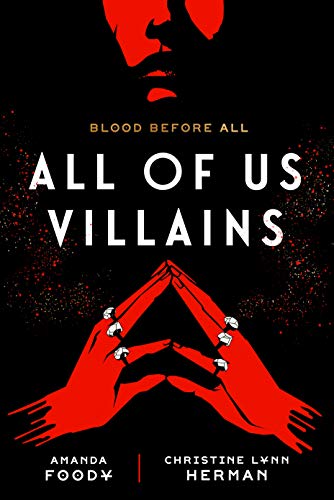 The blockbuster co-writing debut of Amanda Foody and Christine Lynn Herman, All of Us Villains begins a dark tale of ambition and magick...

You Fell in Love with the Victors of the Hunger Games.
Now Prepare to Meet the Villains of the Blood Veil.

Every generation, at the coming of the Blood Moon, seven families in the remote city of Ilvernath each name a champion to compete in a tournament to the death.

The prize? Exclusive control over a secret wellspring of high magick, the most powerful resource in the world—one thought long depleted.

But this year a scandalous tell-all book has exposed the tournament and thrust the seven new champions into the worldwide spotlight. The book also granted them valuable information previous champions never had—insight into the other families’ strategies, secrets, and weaknesses. And most important, it gave them a choice: accept their fate or rewrite their legacy.

Either way, this is a story that must be penned in blood. 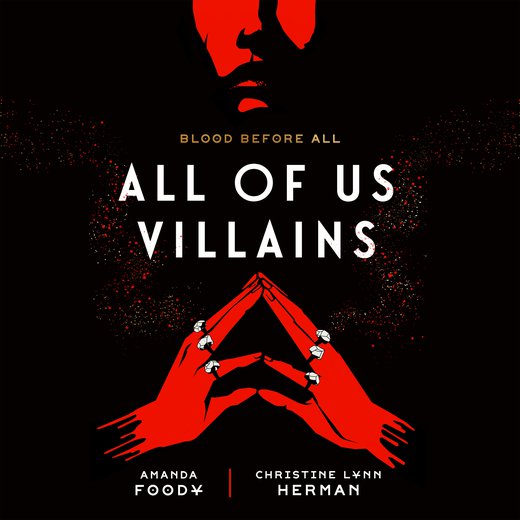 
The Lowes shaped cruelty into a crown, and oh, they wear it well.

A Tradition of Tragedy: The True Story of the Town that Sends its Children to Die

The Lowe family had always been the undisputed villains of their town’s ancient, bloodstained story, and no one understood that better than the Lowe brothers.

The family lived on an isolated estate of centuries-worn stone, swathed in moss and shadowed in weeping trees. On mischief nights, children from Ilvernath sometimes crept up to its towering wrought iron fence, daring their friends to touch the famous padlock chained around the gate—the one engraved with a scythe.

Grins like goblins, the children murmured, because the children in Ilvernath loved fairy tales—especially real ones. Pale as plague and silent as spirits. They’ll tear your throat and drink your soul.

All these tales were deserved.

These days, the Lowe brothers knew better than to tempt the town’s wrath, but that didn’t stop them from sneaking over the fence in the throes of night, relishing the taste of some reckless thrill.

“Do you hear that?” The older one, Hendry Lowe, stood up, brushed the forest floor off his gray T-shirt, and cracked each of his knuckles, one by one. “That’s the sound of rules breaking.”

Hendry Lowe was too pretty to worry about rules. His nose was freckled from afternoons napping in sunshine. His dark curls kissed his ears and cheekbones, overgrown from months between haircuts. His clothes smelled sweet from morning pastries often stuffed in his pockets.

Hendry Lowe was also too charming to play a villain.

The younger brother, Alistair, leaped from the fence and crashed gracelessly to the ground. He didn’t like forgoing the use of magick, because without it he was never very good at anything—even an action as simple as landing. But tonight he had no magick to waste.

“Do you hear that?” Alistair echoed, smirking as he rose to his feet. “That’s the sound of bones breaking.”

Although the two brothers looked alike, Alistair wore the Lowe features far differently than Hendry. Pale skin from a lifetime spent indoors, eyes the color of cigarette ashes, a widow’s peak as sharp as a blade. He wore a wool sweater in September because he was perpetually cold. He carried the Sunday crossword in his pocket because he was perpetually bored. He was one year younger than Hendry, a good deal more powerful, and a great deal more wicked.

Alistair Lowe played a perfect villain. Not because he was instinctively cruel or openly proud, but because, sometimes, he liked to. Many of the stories whispered by the children of Ilvernath came from him.

“This is a shitty idea,” Alistair told his brother. “You know that, right?”

“You say that every time.”

Alistair shivered and shoved his hands in his pockets. “This time it’s different.”

Two weeks ago, the moon in Ilvernath had turned crimson, piercing and bright like a fresh wound in the sky. It was called the Blood Moon, the sign that, after twenty years of peace, the tournament was approaching once more. Only a fortnight remained until the fall of the Blood Veil, and neither brother wanted to spend it in the hushed, sinister halls of their home.

The walk downtown was long—it was a waste of magick to drain a Here to There spellring this close to the tournament, and they couldn’t drive. Both were lost in their thoughts. Hendry looked like he was fantasizing about meeting a cute girl, judging from how he kept fiddling with his curls and smoothing the wrinkles in his sleeves.

Alistair was thinking about death. More specifically, about causing it.

The gloomy stone architecture of Ilvernath had stood for over sixteen hundred years, but in the last few decades, it had been renovated with sleek glass storefronts and trendy outdoor restaurants. Despite its disorienting maze of cobbled, one-way streets, questionable amenities, and minimal parking, the small city was considered an up-and-coming spot for the art and magick scene.

The Magpie was the boys’ favorite pub, although no one would guess that from how infrequently they visited. Determined to keep their identities concealed and their photographs out of the papers, Alistair insisted they vary the location for their nighttime excursions. They couldn’t afford to become familiar faces—they’d been homeschooled for that very reason. The way their grandmother talked, one whisper of their names and the city would be raising their pitchforks.

Alistair looked grimly upon the Magpie, its sign a dark shadow in the red moonlight, and wondered if the trouble was worth it.

“You don’t have to come inside,” Hendry told him.

“Someone needs to watch out for you.”

Hendry reached underneath his T-shirt and pulled out a piece of quartz dangling on a chain. The inside pulsed with scarlet light—the color of a spellstone fully charged with high magick.

Alistair grabbed Hendry by the wrist and shoved the stone back beneath his shirt before someone noticed. “You’re asking for trouble.”

Hendry only winked at him. “I’m asking for a drink.”

Magick was a valuable resource throughout the world—something to be found, collected, and then crafted into specific spells or curses. Once upon a time, there had been two types of magick: frighteningly powerful high magick and plentiful, weaker common magick. Throughout history, empires had greedily fought for control of the high magick supply, and by the time humanity invented the telescope and learned to bottle beer, they had depleted it entirely.

Or so they’d believed.

Hundreds of years ago, seven families had clashed over who would control Ilvernath’s high magick. And so a terrible compromise was reached—a curse the families cast upon themselves. A curse that had remained a secret … until one year ago.

Every generation, each of the seven families was required to put forth a champion to compete in a tournament to the death. The victor would award their family exclusive claim over Ilvernath’s high magick, a claim that expired upon the beginning of the next cycle, when the tournament began anew.

Historically, the Lowes dominated. For every three tournaments, they won two. The last cycle, twenty years ago, Alistair’s aunt had murdered all the other competitors within four days.

Before they’d learned about the tournament, the rest of Ilvernath could only point to the Lowes’ wealth and cruelty as the reasons an otherwise mysterious, reclusive family commanded such respect from lawmakers and spellmakers. Now they knew exactly how dangerous that family truly was.

So with the foreboding Blood Moon gleaming overhead, tonight was a risky time for the only two Lowes of tournament age to crave live music and a pint of ale.

Although the Lowe family hadn’t formally chosen their champion yet, the boys had always known it would be Alistair. Tonight meant far more to either of them than a simple drink.

The pub was a cramped, slovenly place. The air was thick from tobacco smoke; rock music blared from a jukebox in the corner. Red-and-white checkered cloths draped over every booth. For the sociable, there were billiards. For those keeping a lower profile, there was a pinball machine, its buttons sticky from whisky fingers.

The Magpie was flooded with cursechasers. They traveled the world to gawk at magickal anomalies like Ilvernath’s, such as the curse in Oxacota that left a whole town asleep for nearly a century, or the curse on the ruins in Môlier-sur-Olenne that doomed trespassers with a violent death in exactly nine days’ time. Now, the tourists clustered in groups, whispering over well-worn copies of A Tradition of Tragedy. The recent bestseller had exposed the death tournament and Ilvernath’s surviving vein of high magick … and had catapulted their remote city into the international spotlight.

“I didn’t believe that the Blood Moon was actually scarlet,” Alistair overheard one of them whispering. “I thought it was just a name.”