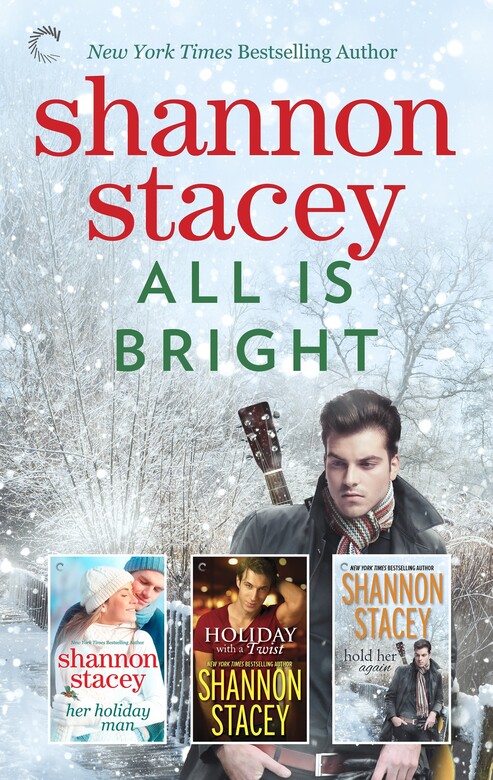 Christina Forrester is left raising her young son without any of the comforts of their old life. She’s learning to do it all on her own. Well, almost on her own—she’d be lost without Gail, the kind widow across the street. And when Gail’s son Will comes home, the beautiful and determined single mother awakens something in him he thought was buried forever.

As Will and Christina are forced to spend more time together, feelings that are more than neighborly grow between them. And with Christmas coming and a child filling both houses with holiday cheer, it becomes nearly impossible not to embrace the joy—and the love—in their lives.

Holiday with a Twist

Leigh Holloway’s best friend broke Croy Dawson’s heart back in high school, and Croy knows it was Leigh’s fault. They’ve never liked each other, but Croy isn’t cruel: he’d never turn away a pretty woman in need of some family-Christmas fortification. He doesn’t expect her to drink just enough candy-cane martinis to tell him her secrets—and he definitely doesn’t expect to get caught up in her holiday madness.

Despite the surprising love and laughter, Croy and Leigh can’t escape the truth: he can’t walk away from his family obligations and she has a life and career to reboot. But anything is possible if your holiday comes with a twist…

Ava Wright isn’t happy to see her high school sweetheart rolling into their hometown a few weeks before Christmas. There’s no way she’ll be able to avoid him. No one can: he’s become a country-music superstar since going solo and leaving Ava behind.

Jace Morrow grew up believing “money can’t buy happiness” was something people said to make themselves feel better. But now he knows it’s the truth: no matter how many number-one hits he has, he’ll never recapture the magic of singing with Ava. Missing her—loving her—and living with making the wrong choice in life were what made him who he is. As they fall in love all over again, they’re both faced with choices for their future…and this time Jace intends to make the right one.