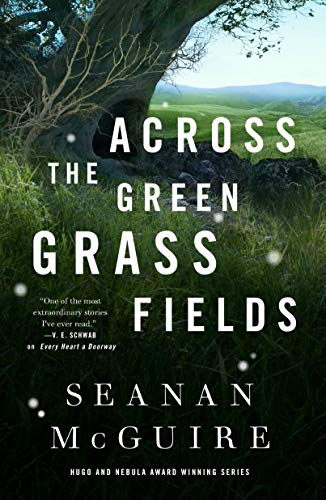 A young girl discovers a portal to a land filled with centaurs and unicorns in Seanan McGuire's Across the Green Grass Fields, a standalone tale in the Hugo and Nebula Award-winning Wayward Children series.

“Welcome to the Hooflands. We're happy to have you, even if you being here means something's coming.”

Regan loves, and is loved, though her school-friend situation has become complicated, of late.

When she suddenly finds herself thrust through a doorway that asks her to "Be Sure" before swallowing her whole, Regan must learn to live in a world filled with centaurs, kelpies, and other magical equines—a world that expects its human visitors to step up and be heroes.

But after embracing her time with the herd, Regan discovers that not all forms of heroism are equal, and not all quests are as they seem... 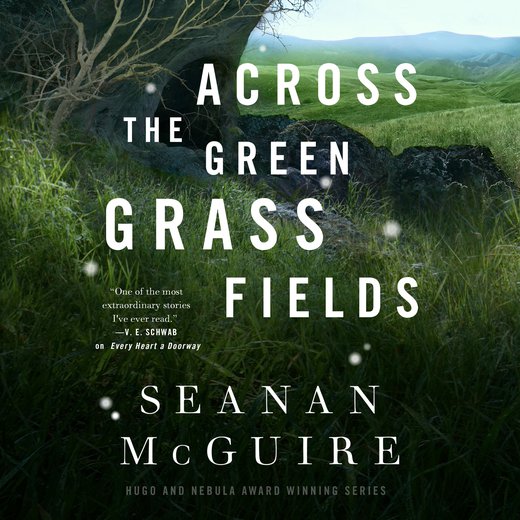 
THERE WAS A LITTLE GIRL


AT SEVEN, REGAN LEWIS was perfectly normal according to every measurement she knew, which meant she was normal in every way that counted. She wasn’t short or tall, not skinny or fat, but average in all directions, with hair the color of straw and eyes the color of the summer sky. She liked spinning circles in the field behind her house until her head spun and the world turned deliciously dizzy, like it was humming a song she couldn’t hear well enough to sing along to. She liked to read and draw and build palaces of mud, which she populated with frogs and crawdads and other creatures from the local creek. She loved her parents, and was only a little sad that so many of her friends had baby brothers and big sisters, while she had herself, and her parents, and a black-and-white cat named Mr. Buttons in honor of the three perfectly round black spots on his otherwise perfectly white chest.

Although sometimes her friends would come to school complaining about one or another horrible thing their brothers and sisters had done, and she would think maybe a cat named Mr. Buttons was the best sort of brother.

But most of all, more than anything else in the world, more than even her parents (although thoughts like that made her feel so guilty the soles of her feet itched), Regan loved horses.

She couldn’t say exactly why she loved them so much, only that she did, and thankfully, “girls and horses” was enough of a thing that adults said it knowingly when they saw her doodling ponies in the margins of her math workbook, or when she went high-stepping around the athletic field like a quarter horse doing dressage. Loving horses didn’t make her strange, and strange was something to be feared and avoided above all else in the vicious political landscape of the playground, where the slightest sign of aberration or strangeness was enough to bring about instant ostracization.

That was something adults couldn’t understand, not even when they understood other things, like a love of horses or a burning need to go to the state fair, lest a lack of funnel cake lead to gruesome and inescapable death. They thought children, especially girl children, were all sugar and lace, and that when those children fought, they would do so cleanly and in the open, where adult observers could intervene. It was like they’d drawn a veil of fellow-feeling and good intentions over their own childhoods as soon as they crossed the magic line into adulthood, and left all the strange feuds, unexpected betrayals, and arbitrary shunnings behind them.

Regan thought it must be nice, to believe children were innocent angels incapable of intrigue or cruelty. She would have liked to believe that. But she had two major barriers between her and that happy ignorance:

The three of them had been the best of friends in kindergarten and into the first months of first grade. They had liked the same games and the same fairy tales, even if Laurel always got to be Snow White when they played princesses, and Regan always had to be the Little Mermaid, who couldn’t talk or run or do the princess dance, because she didn’t get to have legs until a prince came along and kissed her. They had liked the same colors and the same cookies and sometimes they all held hands at naptime, an inseparable circle of girls hurling themselves against the walls of the world.

But then, three months into first grade, Heather had come to school with a garter snake in her lunch box. It had been a beautiful thing, grass-green with golden stripes down the sides of its body, narrow as a ribbon, twisting and twining in Heather’s hand when she brought it out at recess, making a strange, musky smell that was neither pleasant nor foul, but simply part of the great mystery of the snake itself. Regan had almost reached for it, and caught herself only when she saw the expression of profound, disapproving disgust on Laurel’s face. She had taken an involuntary step backward, putting Laurel between herself and Heather, like the other girl could become a wall, a protective barrier, a way to escape the storm that was certainly coming.

“What is that?” Laurel had demanded, in the high, judgmental tone she normally reserved for bad smells and noisy boys.

Regan had looked intently at Heather, hoping to hear an answer that would somehow satisfy Laurel, that would make all this go away and put things back the way they’d been when she’d rolled out of bed this morning. But Heather had always been stubborn. This confrontation had been building for years, one small rebellion at a time. She had squared her shoulders, set her jaw, and looked Laurel in the eye, not flinching away.

“A garter snake,” she’d said. “I found it in the garden when I went out to pick tomatoes. I think it was hunting beetles. That’s what they eat when they’re this little. Beetles and baby mice and sometimes grasshoppers. Do you want to hold it?” She’d thrust her arm out then, the snake still twined like a ribbon through her fingers, beautiful and somehow otherworldly at the same time, each scale like a glimmering jewel.

Laurel had recoiled and slapped the snake out of Heather’s hand, a disgusted “ew” escaping her lips. Regan’s gasp had been swallowed by Heather’s cry of dismay as she lunged to recover her prize, followed by a squeal of pain when the snake, feeling ill-treated, bit her finger. She’d let it go then, turning to Laurel as it escaped into the waving grass of the kickball field, cradling her hand to her chest. Beads of blood had welled up on her index finger, and Regan had stared at them, transfixed.

This is what it costs to be different, she’d thought, the words clear and somehow older than the rest of her, like she was hearing the voice of the woman she was eventually going to become. She’d shuddered then, still unable to look away.

“Why did you do that?” Heather had asked, voice small and wounded. “It was just a little snake. That’s all.”